The Duke of Wellington statue at Register House

The Duke of Wellington statue at Register House 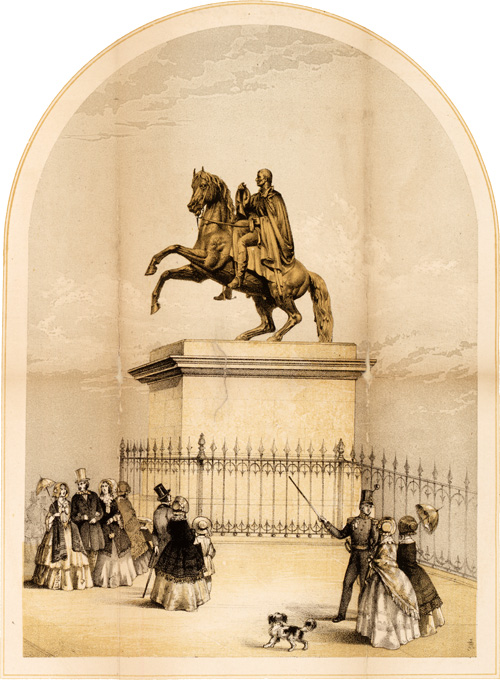 The statue of the Duke of Wellington outside Register House was unveiled in a highly patriotic ceremony on 18 June 1852, the thirty-seventh anniversary of his greatest victory at Waterloo. The old general, by then 83, was not present, but many veterans he commanded in the battle were there to hear him hailed as an outstanding British military hero. He died in September that year.

Wellington's defeat of Napoleon was regarded as ensuring the freedom not only of Britain but of Europe in general.

The proposal for a public statue in Edinburgh was carried out by a committee of Tory landowners and supporters. Other landowners, who were their political opponents, contributed funds. They also had a high regard for Wellington's military prowess and leadership, although they deplored his conservative politics.

The Iron Duke in bronze by Steell

In 1842 the commission went to John Steell, from Edinburgh, who depicted Wellington mounted on his favourite horse, Copenhagen, firmly but calmly directing his forces in battle. His magnificent bronze sculpture is regarded as among the best of the duke, and one of his greatest works. 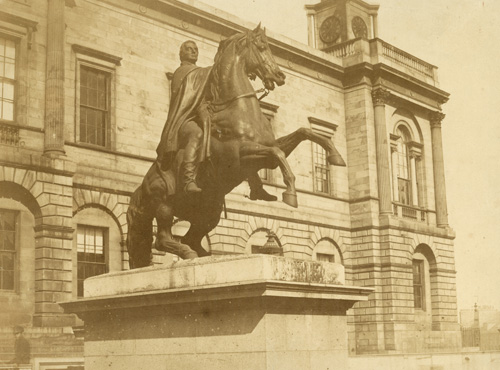 The position of the statue prompted a prolongued and bitter dispute over the screen wall in front of Register House. It was agreed that the wall needed to be moved closer to the building to make room for the sculpture. A group of local shopkeepers and other Edinburgh citizens tried to have more drastic alterations made that would allow easier movement at the awkward corner with Leith Street. 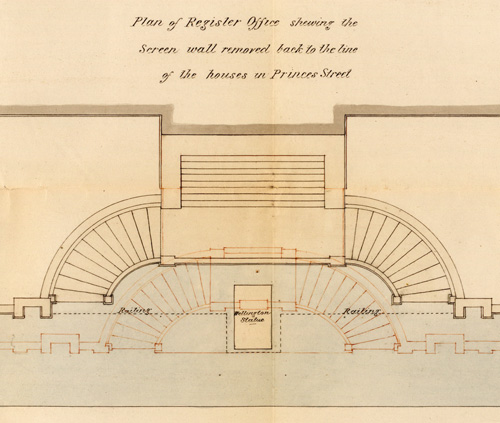 The Register House trustees and their aristocratic allies got their way. Their favoured design retained the distinctive curved corners of Adam's original design. Forty years later, the advent of trams led in 1890 to the screen wall being pushed back even further to its present position, while the steps were squared off.

The Iron Duke still stands guard where he was placed in 1852.

See our feature on Scottish Soldiers at Waterloo and read more about the History of our Buildings. To learn more about the RHP collection, see our Maps and Plans guide and search the online catalogue.