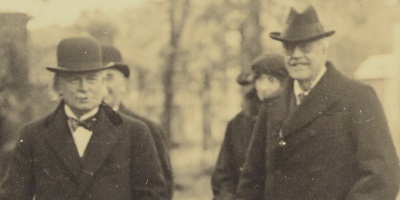 Thousands of items from the family archive of former British Prime Minister Arthur Balfour (1848-1930) have been bought by National Records of Scotland (NRS), on behalf of the nation.

Balfour was the Prime Minister from 1902 to 1905. As Foreign Secretary, he was one of the principal British delegates at the Versailles peace conference in 1919, which negotiated the peace treaty following World War I. He is best known as the author of the 1917 Balfour Declaration conferring British support for a Jewish homeland in Palestine.

The Balfour family was very well-connected in scientific, artistic and political circles. Several family members were closely involved with the women’s suffrage movement, perhaps most notably Lady Frances Balfour (1858-1931), sister-in-law of the 1st and 2nd earls of Balfour.

“This collection offers a remarkable insight into life in a family whose influence stretched around the world; revealing them at home, at work and at play. We are pleased to have secured this collection, which includes items from 1577 to 1956, for the nation.”

“This purchase safeguards a remarkable collection which offers insights into the life of an influential Scottish family over a huge period of history.

“The public ownership of the Balfour archive not only ensures that it is preserved whole and in Scotland forever, but that the public and researchers have the opportunity to see and study it.

“I look forward to finding out more about the highlights in this collection once National Records of Scotland have carried out further detailed research on its content.”

Michael Brander and Lord Balfour, speaking on behalf of the family, said:

“Our forebear, Arthur James Balfour, was at the centre of many pivotal events over his remarkable life and the dilemmas he faced, including Irish home rule, free trade and unwarranted aggression in Europe, still resonate today. We are delighted that his papers have found a permanent home at the National Records of Scotland for future scholarship.”