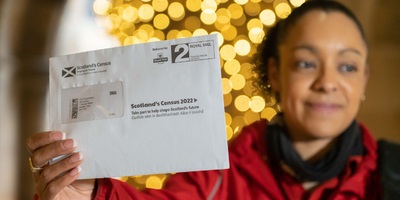 The first of Scotland’s 32 Local Authority areas have achieved a 90% return rate for the census – and more than half have now reached 85%, National Records of Scotland (NRS) confirmed today.

Aberdeenshire and the Western Isles have both now exceeded 90% and a total of 19 council areas have reached 85% as the Census enters its final full week. The national completion rate stands at 2,210,265 households, with more than four in every five households having completed across 30 areas.

Census returns must be submitted by the end of May; failure to do so could result in prosecution and a fine of up to £1000.

“Thousands of households are continuing to submit their returns before the deadline. It’s great that we are seeing this increase in census response rates right across Scotland, but it is vital that we secure as high a rate as possible so that the census can be effective in delivering its many benefits for future public services. Census data informs how and where public money is spent on vital services, from the building of new schools and hospitals to improving transport links and understanding health needs.

“I would urge everyone who has not completed their census to do so immediately and before the end of May, to avoid the risk of prosecution. Our field teams are out each day visiting those addresses across Scotland where we know we have not received a return and offering to fill in your census return there and then, supporting those who still need help.”

Help is available online at census.gov.scot, or by calling the free helpline on 0800 030 8308 if you have specific questions or need a paper questionnaire. Field teams have undertaken more than 1.4 million visits to households to support completion, and are carrying out community events across Scotland throughout the coming week to support census completion.

Paul Lowe, Chief Executive, NRS added: “I want to say a huge thank you to everyone across Scotland who has already done their bit and completed their return. We are making good progress but we need more in our communities to step forward and complete, to help achieve the important and long lasting benefits of the census. Census data informs how and where public money is spent and where services are delivered in our local communities; these decisions rely on good census information.”