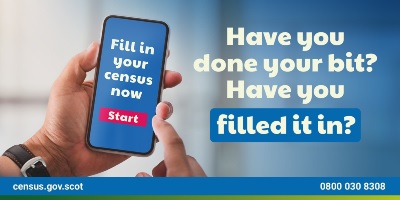 Over two million households have opted to complete the census online, according to new figures released by National Records of Scotland today.

“As the first ever principally digital census in Scotland, it's been fantastic to see more than two million households choose to complete their census successfully online. With over 89% of census returns being received this way, it reflects the popularity and acceptability of this innovative approach across the nation and will inform how we run the census in future.

“Earlier this week we also crossed a number of milestones, with over 2.2 million household responses received, exceeding an 85% national return rate and 25 Local Authorities exceeding 85%. I want to thank everyone who has already filled in their census.

“I would urge everyone who has not completed their return to do so now. You only have until the end of the month to make sure that your voice is heard. Census data is used to make important decisions on vital public services like schools, hospitals, housing and public transport, so filling it in really makes a difference to you, your family and your community.”

There is significant support for people to complete the census. There have been over 1.58 million visits by census field staff to doorsteps, 370,000 calls to the Scotland’s Census contact centre and 65,000 emails and web chat enquiries answered.

If you haven’t completed your census please visit the website census.gov.scot or call the freephone helpline number on 0800 030 8308.