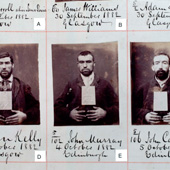 Many of these records are out-stored and we require 24 hours' notice before they can be produced.  We recommend that you contact the Historical Search Room to check the location of records before visiting.  Many of the records are un-indexed and we do not make speculative searches through un-indexed records for enquirers.

For a selection of images relating to crime and criminals from our collections, visit our image gallery.

This guide covers the court records:

As well as those about different types of criminals and prisoners 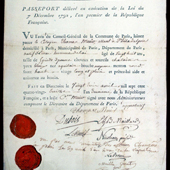 The principal source for information on crime and criminals is the records of the High Court of Justiciary, Scotland's supreme criminal court. The court has exclusive jurisdiction over serious crimes, in particular murder, rape, treason, heresy, counterfeiting and crimes of a sexual nature. It sits permanently in Edinburgh, and travels on circuit throughout Scotland. The court also acts as a court of appeal from criminal proceedings in the sheriff (or inferior) courts.

Prisoners who were sentenced to be transported were always tried in the High Court.

We normally receive records from the High Court when they are more than 10 years old. Please note that the following High Court records are closed to the public for 100 years and cannot be accessed without the permission of the court:

The main record of a High Court trial is the bundle of case papers known as the 'process' or 'small papers', (also 'case papers' or 'sitting papers') (JC26). They usually include a copy of the indictment, which sets out the charges against the accused, depositions, confessions and other information on the accused and the crime, together with information about witnesses and jurors. You may also find statements by the accused and other papers produced as evidence, but case papers do not include transcripts of trials.

Finding records of individual trials depends on the date.  We are adding all case papers from 1800 onwards to our catalogue. The period from 1822 (with the exception of 1826-27) has been completed and the period from 1801-1821 will be added gradually. Case papers not catalogued in this way are stored according to the year and location of the trial, and it is necessary to search through them to find individual records. For some cases more than 100 years old it is possible to identify records by searching our catalogue under the name of the victim of the crime.

Further trial records are found in the High Court's minute books, which provide summaries of proceedings in court. There are minute books for Edinburgh cases since 1576 (JC6-JC9), and for circuit cases since 1655 (JC10-JC14). Additionally, there are the books of adjournal, which contain copies of indictments with brief summaries of trial proceedings. There are books of adjournal for Edinburgh cases since 1576 (JC2-JC5), and for circuit cases since 1890 (JC15). There is also a small series of selected trial transcripts from 1888 onwards (JC36), details of which will shortly be added to our electronic catalogue.

Some trials have been printed in:

Some of the more sensational trials are covered in William Roughhead's series of 'Notable Scottish trials'.

The following finding aids are available in the Historical Search Room

The main records from the Lord Advocate's Department nbsp are the precognitions (AD14-AD15). Precognitions are the documents containing the written statements of the witnesses and accused about a crime, and they are put together before a trial to prepare the case against the accused. As precognitions provide a snapshot of the local community they are a wonderfully rich source of information about individuals, economic conditions, contemporary attitudes and even language.  The precognitions relate to serious crimes tried at the High Court in the 19th and 20th centuries, though few survive before 1812. They can be identified by searching on our catalogue under the name of the accused. Precognitions less than 100 years old are closed to public access.

If a precognition is available there will usually be a record of a trial at the High Court too, although cases do not always come to a trial. Similarly as records do not always survive, beware the temptation of concluding that there was no trial if you cannot find a precognition.

Many criminal cases were dealt with by the Privy Council before its abolition in 1708.  Most men and women who appeared before the Council were of some social standing, rather than ordinary criminals, but the Council also heard cases of people accused of witchcraft and seditious practices. 'The Register of the Privy Council' for 1545-1691 is published in 35 volumes. The published volumes are fully indexed and available for consultation in the Historical Search Room, as well as in good reference libraries. The unpublished Privy Council records from 1692-1708 (PC) are not indexed, and can be consulted at General Register House.

The local sheriff courts deal with both criminal and civil cases. Sheriff courts trials are for lesser crimes, commonly theft and assault, and we receive the records once they are more than 25 years old. The exceptions are Kirkwall and Lerwick Sheriff Courts, whose records are held at Orkney and Shetland Archives respectively.

Our catalogue lists the records we hold for each sheriff court, although criminal trials are not indexed and it is necessary to search through records to find individual cases. From the 19th century onwards most of the courts kept criminal records separately from civil case records, but in the earlier period you will often find these records mixed together.

There are different types of sheriff court trials. More serious cases are heard before a sheriff and jury, and are known as 'solemn' trials; depending on the court, records can be called a number of different things, including:

Less serious cases are heard before the sheriff alone, and are called summary trials. Records of these are normally called 'criminal and quasi-criminal roll books' or 'records of summary trials'. For most of the 20th century there were also separate trials for juveniles.

If you are looking for information about your own conviction bear in mind that the we only receive trial records from sheriff courts once they are more than 25 years old.  Before this date they are found at the court where the trial took place. However, in the modern period the main record of summary cases is destroyed after 10 years, when the conviction is considered 'spent', and there may only be a brief record in a criminal and quasi-criminal roll book or in summary court sheets. Contact details for all of the sheriff courts can be found on the Scottish Courts website.

If you require evidence of your conviction you can contact Disclosure Scotland, who will produce a 'basic disclosure' showing all unspent convictions on payment of a fee. If you need to show both spent and unspent convictions you should contact your local police force and make a 'subject access' request for this information under the General Data Protection Regulation. You can find contact details on the Police Scotland website.

The Admiralty Court  dealt with crimes committed on the high seas or in harbours, including smuggling, piracy and trading with the enemy. The records of the court cover the period from 1557 to 1830, when the court was abolished. They include criminal trial reports for the period 1705-1830 (AC16). The earliest surviving court records were published in 'Acta Curiae Admirallatus Scotiae, 1557-1561/2' (Stair Society, 1937).

Minor offences within royal burghs were tried by the burgh courts.  Our catalogue lists the surviving burgh court records and shows whether they are held by us or by local archives. Burgh records are not indexed.

Franchise courts were local courts where a person, usually the local landowner, held a franchise from the crown to administer justice in his area. The courts had both criminal and civil jurisdiction. There were four different types of court:

With the exception of the barony courts, they were abolished in 1747, after which the barony courts quickly declined. The records are mainly in a separate series (our reference RH11) some of which have been digitised and are available on Virtual Volumes in our search rooms. Others may be found among private collections, and in sheriff court (SC) and burgh (B) records. Selections of franchise court records have been published by the Stair Society and the Scottish History Society.

Information on prisoners sentenced to be transported can be found in the registers for the local prisons (see below) serving the courts where they were sentenced. However, because prisoners were shipped from England there is often further information in the Home Office records at The National Archives.

We hold microfilm copies of the transportation registers, 1787-1870 (our reference RH4/160/1-7). The registers are arranged chronologically by the date of departure of each ship.  They record the name of the convict and where, when and for how many years he or she was sentenced. The State Library of Queensland has compiled a database from the British convict transportation registers of 123,000 of the estimated 160,000 convicts transported to Australia during the period 1787 to 1879.

The criminal trials for individuals sentenced to transportation can be found in the papers of the High Court of Justiciary (above).

Witchcraft was a criminal offence between 1563 and 1736.  Witchcraft trials are found in the records of the High Court of Justiciary (JC), the Privy Council (PC) and local kirk sessions (CH).  In addition to the main series of High Court papers, JC40 contains a number of indictments, summons and verdicts in witchcraft cases , c.1572 -1709.

The publication 'Registers of the Privy Council' contain names of covenanters and others banished to the North American colonies in the 17th century, in particular the third series, volumes VI-X, 1678-1685.

Details of proceedings against covenanters also appear in the records of the High Court of Justiciary (JC).  In addition to the main court papers (JC39) is a series of 115 bundles of papers relating to actions against covenanters, 1679-1688. These contain lists of the accused and depositions of prisoners and witnesses. 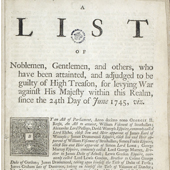 The trials of Jacobites captured after the 1715 and 1745 rebellions took place in England and the records are held by The National Archives. However, the High Court of Justiciary records include material on Jacobite treason trials, 1748-9 (JC7). Useful printed works include: 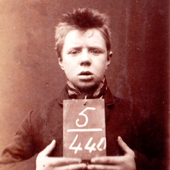 We hold the prison records from the Scottish Prison Service (SPS) and earlier bodies which had responsibility for prisons, including the Prison Commission for Scotland and the Scottish Office Home and Health Department. The main records are the prison registers (HH21), which generally note particulars of the trial and sentence for each inmate as well as personal details such as place of birth, occupation, age, height, and religion. A small number of prison registers contain photographs of prisoners. These have been digitised and are available on Virtual Volumes in our search rooms.

Registers for Perth Prison can now be searched free of charge via our ScotlandsPeople website. Images of the original handwritten admission registers can be viewed and downloaded for a small fee. This collection, covering most years between 1867-1879 and 1888-1921 for males and 1901-1916 for females, is the first in a series of prison registers to be released on ScotlandsPeople. Please see the prison registers research guide for more details.

Few prison registers are indexed but basic details are found on our catalogue. A list of prison registers is given below. Note that the dates given are covering dates, there may be some gaps in the records, and recent records remain exempt from release under Freedom of Information legislation.

Administrative records for Scottish prisons (HH12) occasionally contain references to individual prisoners, and there are also a small number of prisoner files (HH15), details of which are found on the catalogue.

Other prison registers are found in sheriff court records:

Please note that we do not make speculative searches through prison records for an individual even for a given census year.

'Guide to the National Archives of Scotland' (Edinburgh, 1996)

Clarke, Tristram, 'Tracing your Scottish ancestors: the official guide’ (details of current edition are available on our Shop page)