The text for this guide has been provided by the Court of the Lord Lyon.  It covers:

Entries in volume 1 (1672-1804) are very brief, with little genealogical information and very few illuminations of the coats of arms. In some cases legibility is poor.

What is a Coat of Arms?

Coats of Arms were originally used for military purposes and consisted of an actual coat bearing a distinctive design which was worn over a suit of armour. This enabled the knight to be recognised. The design was also displayed on his shield. On his head he wore a helmet and in time this was surmounted by a crest which identified the wearer from a distance and was used particularly during tournaments.

As the military use of Coats of Arms declined they were adopted for civilian purposes on seals and to identify property.

A description of the different elements of a Coat of Arms 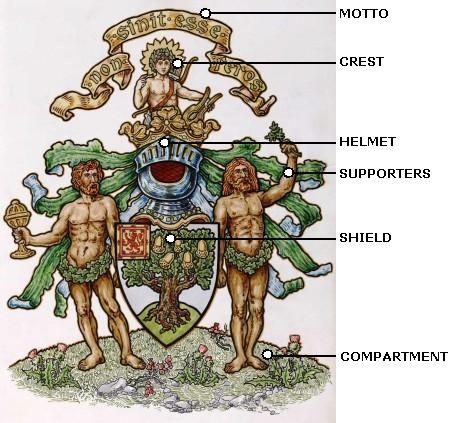 Most personal Coats of Arms consist of a shield, helmet, crest and motto. Supporters, the figures or beasts standing on either side of the shield, are only granted to particular groups of people, including clan chiefs, peers, and senior knights in orders of chivalry.

Companies and other corporate organisations such as civic councils, schools, universities, sporting clubs and charities can also have a Coat of Arms and while some may have shields, crests and mottoes many only have a shield.