We hold records of the census of the population of Scotland for 1841 and every tenth year thereafter (with the exception of the wartime year of 1941 when no census was taken) and of the sample census of 1966.  Census records are closed for 100 years under the Freedom of Information (Scotland) Act 2002. 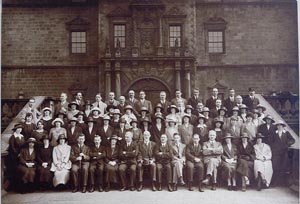 The Scottish census has been the responsibility of the Registrar General for Scotland since 1861.

This is a photograph of 1921 Census Office staff.  James Craufurd Dunlop, Registrar General, is seated in the middle of the first row.

Click on the image to view it full size.

The open census records are transcript books prepared by the enumerators after collection of household schedules from the head of every dwelling, institution and vessel. They are made available as index-linked digital images on our ScotlandsPeople website and at the ScotlandsPeople Centre and Local Family History Centres. The preliminary pages which include a detailed description of the enumeration district can be viewed by selecting the browse option.

The original household schedules were destroyed.

There are separate pages for each census which provide information about the questions asked, examples and links to the census street indexes and other search room guides.

Census records of other countries

Please go to our Useful Websites - Census page for links to the census records of other countries.

The census records (91KB pdf) from ‘Jock Tamson’s bairns: A history of the records of the General Register Office for Scotland' by Cecil Sinclair (Edinburgh, 2000).

Very near the truth: a brief history of the Census in Scotland by Ian White (invited chapter in Scotland's population 2009:  the Registrar General's annual review of demographic trends)

The Scottish way of birth and death from the records of the Registrar General for Scotland, 1855-1939 (Centre for the History of Medicine, University of Glasgow) describes the administration of the 1861 Census and provides brief biographies of the key players.

Official reports for the 1801 to 1931 censuses are available on Histpop - the Online Historical Population Reports website (if you have problems with the site try Histpop at this secondary location). The.reports provide useful background information about the taking of the census, interesting analyses of the results and statistical tables.

‘Guide to census reports Great Britain 1801-1966’ (Her Majesty’s Stationery Office, 1977) is partly available on A vision of Britain through time:

The results of the 2011 census are published on our Scotland’s Census website.