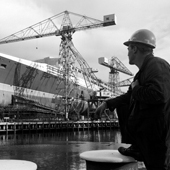 National Records of Scotland (NRS) holds records of the Upper Clyde Shipbuilders (UCS) and other shipbuilding companies. Since shortly after the liquidation of UCS in 1971, and as the industry continued to decline and contract in Scotland, records have been acquired by NRS and other archives from shipyards on the upper and lower Clyde, from the Ayrshire Coast and from the Estuaries of the Forth and Tay. Though the collections include a little 18th century material, the bulk dates from the late 19th and 20th centuries. Apart from the UCS records, which were purchased, the collections have been gifted or deposited by the firms concerned or their liquidators. 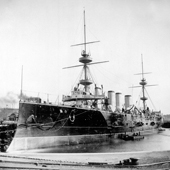 Business and shipbuilding records are normally consulted in General Register House apart from those identified as located in other archives. Many of the records are out housed and need advance notice for production in the search room. Researchers should first check with NRS or search the UK National Register of Archives on the precise location of shipbuilding records before visiting the Historical Search Room. If you are looking for photographs or information on a particular vessel, check for registration details and the shipbuilder in Lloyds Register of Shipping available in most large libraries. You can view a selection of shipbuilding images in our image gallery.

Many of the shipbuilding records acquired by NRS have been sent to an appropriate local archive as indicated on the list below. Contact details for each archive including opening hours can be found in the directory of Scottish archives on the Scottish Archive Network (SCAN) website.

The main company records are:

In 1973 the records of the Upper Clyde Shipbuilders was acquired for the nation by the Keeper of the Records of Scotland in conjunction with the City of Glasgow, Clydebank Town Council and Dunbarton County Council. The NRS retains only the collection of some 40,000 photographs.

NRS also holds the series of Board of Trade dissolved company files (BT2). These include the files for John Brown & Co and William Denny and Brothers among others. These are not company records, but contain documents relating to the incorporation and dissolution of the company and the returns of directors and shareholders submitted as a requirement of company law.

M Moss and J R Hume, 'Workshop of the British Empire: Engineering and shipbuilding in the west of Scotland' (London, 1977)