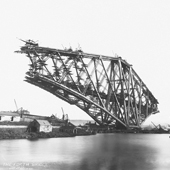 National Records of Scotland (NRS) holds the largest written and pictorial archive of Scottish railway history. The bulk of the collection is made up of the records formerly held by the British Transport Records Historical Records Department in Edinburgh and passed to us by the terms of the Transport Act 1968 (section 144) (NRS reference BR).

You can view a sample of photographs from railway company records in our image gallery.

With the exception of public timetables and publicity matter, a 30 year closure period is applied to the records of these four depositors.

Deposits of private collections (forming part of the Gifts and Deposits series) are also an important source for railway history. These include:

All railway records and publications may be consulted at our Historical Search Room at General Register House. Information on our railway records is given in 'Tracing Scottish Local History', chapter 12, and the NRS publication, The Scottish Railway Story.

We are represented on the Railway Heritage Committee and its Scottish and Record Sub-committees. The Committee's role is to identify and designate railway records and artefacts that merit preservation and to ensure that they will be held in good condition in appropriate locations.

The earliest Scottish railway to be incorporated by private Act of Parliament was the Kilmarnock and Troon (1808). Between 1808 and 1905 a total of 197 companies were incorporated, the majority by similar means, though in the late 19th and early 20th century a few obtained their powers by either a Light Railway Order, or a Board of Trade certificate. The exception was the Whiteinch Railway, incorporated in 1872 under the Companies Act (NRS reference BT2/433). Of these 197 companies, only 167 came to fruition. Of the remaining 30, powers were not exercised or were abandoned and in one case the relevant act was suspended.

Our holdings are a major source for 19th century transport architecture in Scotland. There is a wealth of photographic material relating to railway stations and to a lesser extent railway hotels, some dating back to the 1890s or even earlier, but the majority is 20th century and includes not only snapshots taken by railway enthusiasts but officially commissioned views for publicity purposes.

The most important and voluminous source however, is the large collection of architectural drawing dating back to the 1830s. Their subject matter ranges from minor structures such as platelayers' huts, stationmasters' desks and kitchen equipment to major termini, golf courses and hotels. The drawings, now part of the Register House Plans series (NRS reference RHP), can be consulted in the Historical Search Room. You can search for railway plans using our online catalogue.

Railway construction dramatically altered the landscape of 19th and early 20th century Scotland. Photographs, drawings and calculations exist for the Forth Bridge and date from the 1880s. There are photographs and records (but not drawings) relating to the Tay Bridge - the longest rail bridge over water in Europe.

The large collection of bridge and survey plans (including parliamentary plans) dates from the 1830s to the 1970s and includes drawings of stone bridges on the Glasgow, Paisley, Kilmarnock and Ayr railway, the Scottish Central and other early railways.

An important but neglected source of information are the minutes of evidence (often containing very detailed engineering minutiae) on Railway Bills before parliamentary committees (NRS reference BR/PYB(S)/1-747). Interesting engineering specifications and schedules survive in the records of the Glasgow and South Western, the North British and Caledonian Railways.

The survival of records varies from company to company. Generally speaking there is little material for smaller and earlier companies, though the 1836 drawing (RHP42535) of a locomotive involved in an accident on the Dundee and Newtyle Railway is an exception. Useful records for the larger companies, who had their own workshops, survive in the form of diagrams, photographs and technical data, for example:

Railway records are an essential, but often neglected source for local history, family history and social history. Timetables, for example, can reveal not only the working and leisure pursuits of populations, but may contain interesting advertisements (for example NRS reference BR/RSR/4) and other publicity material.

Labour relations in the Scottish railway industry are recorded in minutes and report from 1875 to 1963 (NRS reference BR/LAS(S)/1-246).