The Scottish parliament, or 'three estates' of clergy, nobility and burgesses, originated in the mid-thirteenth century though it is first mentioned in 1293. Like the very similar General Council (a term first used in 1365), it grew out of the King's council, composed of nobles, prelates and royal officials. The General Council had administrative, financial and legislative functions, but lacked the judicial powers of Parliament, the supreme court of the realm. Parliament, however, sat less frequently than the General Councils or the Conventions of Estates which replaced them in the late 16th century. Conventions could be summoned more speedily than parliament, which required 40 days notice and were often summoned for specific purposes, such as taxation. They became more formalised in the 17th century and had virtual parliamentary status, though legislation passed there could be re-enacted by a subsequent parliament. 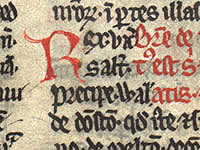 Early parliaments rarely lasted more than a few days and it was only at the end of the 16th century that parliament established itself permanently in Edinburgh. Theoretically every tenant in chief who held lands directly of the Crown could attend but in practice this was impossible. From 1428 the higher nobility received a personal summons from the King while smaller barons and free-holders could send representatives in their place. Burgesses, elected by the town council, attended from the mid 14th century - their presence important for financial reasons. An Act of 1587 set the presence of the Shire Commissioners on a more regularized footing. The Scottish Parliament regularly delegated its authority to committees and commissions. Committees reported back to Parliament. Commissions had power to determine matters referred to them. Under David II (1329-71) two committees were set up to deal with appeals from inferior courts.

The Committee for Causes, Complaints and Petitions, or Lords Auditors (Domini auditores ad causas et querelas), ran until 1496 after which its functions were transferred to the Lords of Council (see Court of Session).

The second, the Committee for Falsing of Dooms (appeals from judgements) ceased around 1544.

Parliament, however, continued to have residual judicial powers up to the Union, notably in cases of treason. A third committee, the 'Lords of Articles', whose members were drawn from all estates plus the officers of state, prepared legislation to be put before parliament. Unpopular because of the Crown's control of its membership, it was abolished in 1640, revived in 1660 and finally abolished in 1689. Between 1639 and 1651, 1660-1 and again in 1688-9, parliament appointed a Committee of Estates, effectively a commission as it had wide legislative and executive powers but did not have to report to Parliament.

The last session of the Scottish Parliament took place on 25 March 1707. Article III of the Treaty of Union, which took effect from 1 May 1707, stipulated that the United Kingdom would henceforward be represented by one and the same Parliament.

Although the earliest surviving parliament roll dates from 1293, there are few original records earlier than 1466 and even thereafter there have been considerable losses. Most of the surviving records, apart from some records of the Committee of Estates for 1643-1650, some warrants and parliamentary papers, have been printed in the 'Acts of the Parliament of Scotland' (or APS), edited by T Thomson and C Innes (1814-1875). The series has a comprehensive index in volume 12.

Since the publication of this series, however, much new material has come to light. The Scottish Parliament Project, based at the University of St Andrews, has produced the Records of the Parliaments of Scotland to 1707 (RPS), a new digital edition of the proceedings published on the internet. The database supersedes APS and can be searched on the Records of the Scottish Parliament to 1707 website. For other information on the records of parliament, published sources and administrative history, consult 'The Guide to the National Archives of Scotland' (Stationery Office, 1996), pp 9-19.

The Scottish Parliament 1999-the present

The Scottish Parliament is still developing as an institution and the types of records it produces are evolving to reflect this. Until this situation stabilises, it is difficult to put together a comprehensive cataloguing scheme to cover the eventual arrangement of records in a logical and understandable way. For this reason, none of the items received from the Parliament have yet been formally catalogued. However copies of the items already held by NRS are available from other sources: