The Purpose of this Guide

This guide will explore and explain the records of the Inland Revenue (Scotland) (IRS) survey of land values and ownership, which took place during the years 1910-1915. This massive survey, implemented by the newly-formed Valuation Office, recorded information on 99.7% of all land in Scotland. These records have been reasonably underused by researchers until now, but have the potential to offer excellent insight into the Scottish rural and urban landscapes at that time.

The two main series of archival records that relate to the survey are a set of specially-annotated Ordnance Survey maps of all valued land portions, termed 'hereditaments'. These provide a graphic-index to an accompanying collection of field books in which surveyors recorded values, particulars, and comments on land portions and properties. All of these records are arranged within the large IRS series. The maps and field books have all been digitised, allowing for swifter, easier access for readers to the Historical Search Room. This guide will also define how to successfully search these records for the purposes of historical enquiry.

Images below illustrate how the IRS Maps and Field Books compliment one another. On the left is a magnified image of Iverpolly Lodge and Gamekeeper's House, Ross and Cromarty, as defined on a specially annotated 6 inch OS map (National Records of Scotland, IRS126/3). On the right is a sketched plan of this property, extracted from a corresponding surveyor field book (National Records of Scotland, IRS80/93 entry 242). 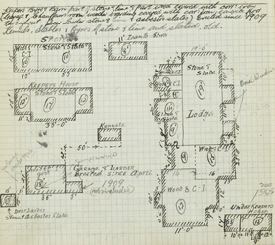 This demonstrates the level of detail that IRS staff often went in to, in order to ascertain accurate valuations.

Historical Context to the Survey

In the late nineteenth and early twentieth centuries land ownership in Scotland, and Britain as a whole, was an extremely emotive subject. Historic local quarrels against landowner absenteeism and disinterest were being increasingly mixed with agitation on the perceived injustice that landed elites were benefitting from enhanced land values; brought about not by their own investment, but by greater state investment in roads and communications.

In response, and despite great political opposition, David Lloyd George, the Chancellor of the Exchequer, managed to push a bill through Parliament that sought to accrue more financial contribution from landowners in this regard. An aspect of the Chancellor's famous 'People's Budget', the Finance Act of 1910 empowered the Inland Revenue, in the guise of the Valuation Office, to conduct a physical survey and valuation of every piece of property in Britain and Ireland. This would create a 'datum line' of values (as at 30 April 1909) from which the levying of a new increment value duty on all future sales and transfer of land or property could be based.

In Scotland, every portion of property, and their applicable boundaries, were marked onto specified Ordnance Survey maps and given individual assessment numbers, unique to the parish, burgh or ward in which they sat. Four-page entries on each of these portions were then recorded in an accompanying field book in which the situation, size, ownership, insurance, physical particulars, and values were noted.

However, partly due to the consistent hostility of the landed classes and the consequences of the Great War, the increment value duties never really came to bear; and the scheme was abandoned in 1920. Nevertheless, the records of the survey created a benchmark for future land purchase and ratings reform, and are a fantastic archive of geographical, archaeological, and social information for pre-War Scotland.

The Valuation Office established ten, later twelve, individual valuation districts in Scotland which were comprised of a number of income tax divisions, these being considered the most convenient units for administrative purposes. Initial information on ownership, tenants, insurance, ratings (where known) past sales etc. was collated using existing sources and in the return of questionnaire forms from landowners, in particular the 'Form-4 Land'. These return forms were never formally preserved, but may be found within various private archival collections. It was certainly in the owners' interests to record information accurately, as a dubiously low initial value could lead to a much higher increment duty being applied in the future. Once this initial stage was completed, the valuation staff then went into each district to inspect every hereditament, delineate its boundaries on a map, and record its particular values in a field book. Some properties were exempt from increment value duty, but each and every hereditament was recorded where possible, whether exempt or not. The NRS has some records relating to questions and disagreements between a number of landowners and the Inland Revenue (e.g. see GD325/1/163 for comment on the "spirit of hostility" being shown to landowners), but general files relating to the work of the survey are held at The National Archives in London.

For rural areas, hereditaments were grouped together by civil parish or burgh, arranged within applicable pre-1975 county series. For example, a field book entry for a croft in the vicinity of the village of Tayvillach, would be found within the books relating to North Knapdale parish, county of Argyll (National Records of Scotland, IRS54/209-210). Urban areas were arranged by county, and then either by burgh, parish or, most likely, by ward. So, for example, entries for businesses that line George Street in Edinburgh would be found within the field books relating to Ward 11, within the county series for Edinburgh and Leith (IRS65/279-301). It is much easier however to determine which field book to consult by firstly inspecting an IRS map.

The most obvious use for the IRS records is for determining the ownership of land and buildings for legal purposes or for historical research. As this was the only cadastral (map-based) survey of property ownership attempted before the advent of electronic title in Scotland, the IRS plans and field books comprise a valuable starting point for determining who owns or owned a piece of land or a building.

Once the owner of a property in about 1910-15 can be determined from the IRS records, other records, such as the register of sasines and valuation rolls can be used to trace previous owners or to follow changes in ownership forward to the present day.

There are three main types of historical enquiry that these records may be potentially useful for. Undoubtedly, their major advantage is their coverage of all land across Scotland, and their emphasis on defined property boundaries.

How the Records Work

Despite their consistent structure, the overall content of field book entries can vary dramatically. The following are points to bear in mind when researching these records.