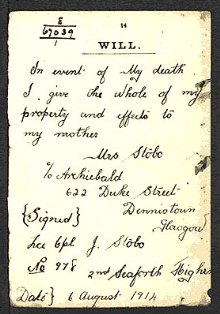 The soldiers' wills have been made available online as part of the commemorations of the 100th anniversary of the outbreak of the First World War.  The poignant documents include the last wishes of 26,000 ordinary Scottish soldiers. Most of them were killed in action, died of wounds or went missing on the Western Front. A smaller number served at Gallipoli, Salonika or in Mesopotamia.

Almost all the wills were written in their pay books by soldiers below the rank of officer, who served in the renowned Scottish infantry and cavalry regiments, as well as in many other British regiments, and all the army corps that were on active service.

In addition to the wills from the Great War, there are about 4,750 wills of Scots soldiers serving in all theatres during the Second World War, including some women auxiliaries, and several hundred from the Boer War and Korean War, and other conflicts between 1857 and 1965.

You can search these records:

This guide provides further information about the different types of will.

What are the Soldiers' Wills?

The soldiers’ wills were usually found in pay books retrieved on the battlefield, or recorded on forms in Army record offices in Britain, or in the absence of a will, in letters home in which soldiers might mention their last wishes. They are generally very brief and do not mention individual possessions. They contain limited personal or service history information.

What are the Airmen's Wills?

This small series (SC70/10) contains the wills of 61 RAF officers and men, including aircrew and balloon operators, 1939-1950. Several complete pay books are preserved. These are not available online yet. For more information see the National Records of Scotland's online catalogue entry on the airmen's wills.

How are the Wills Arranged?

The wills are arranged in the War Office's original batches rather than by regiment or in strict chronological order. For example, wills of soldiers who died in the Boer War may be found in SC70/8/21-22, and in a later batch, SC70/8/1288-1290. The only grouping is by the initial letter of the soldier's surname within each batch.

The original War Office lists of each batch and the covering letters are preserved in SC70/9. The letters sometimes contain additional information regarding withdrawn or untransmitted wills, but this has generally been included in the catalogue description. Other administrative papers are also to be found in SC70/9.

There are several distinct types of will. Apart from the first type described below, the Army forms were designed to be filled in before the soldier was under orders for active service. The completed wills were mostly filed in a local military record office until requested by the War Office when a soldier died. See examples of formal, informal and nuncupative soldiers' wills.

A fuller discussion of the contents of the soldiers' and airmen's wills, and the cataloguing project, can be found in Tristram Clarke, "Scottish soldiers' wills, 1857-1965", 'Scottish Archives', volume 10 (2004)