The 1841 census was taken on Sunday 6 June under provisions in the Census Act 1840 (3 & 4 Vict c.99) and Census Amendment Act (4 & 5 Vict, c.7).  In Scotland enumeration duties were carried out by the official schoolmaster in each parish and the sheriff deputes (for counties and stewartries) and provosts (for burghs).

The 1841 census is the earliest to provide details for the whole population.  It contains less information than later censuses but is a helpful reference point for research in the Old Parish Registers.  The main points to note are that: 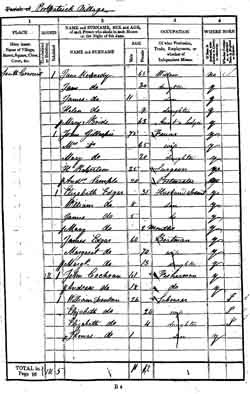 Click on the image to view it full size.

One resident was born outside the county and three were born in Ireland (I).  You can see ticks beside these entries presumably added when the enumerator did a tally for his statistical return.

Some of the ages have been rounded down to the nearest five as instructed but other entries give the actual age.

In this extract from the 1841 census for the village of Elie in Fife (our reference 1841/427/3, page 42) the schoolmaster, Robert Kilgour, comments that he knows of eleven persons who were at sea on census night and of one person who had emigrated in the past six months.

In 1910 the Registrar General for Scotland found the original 1841 and 1851 census enumeration books in a storage area in Whitehall and arranged for them to be transferred to Edinburgh for permanent preservation at New Register House.

Several of the original volumes have not survived.  They are mainly for parishes in Fife and it is said that they were lost when being transferred across the River Forth but there is no documentary evidence to support this.  The missing records are listed below:

There are no enumeration books for the following because the civil parish wasn’t included as a census division in 1841.

Census street indexes provide parish or registration district (RD) and enumeration district (ED) references for each street in a city or urban area. They also cover institutions such as asylums, hospitals, workhouses, prisons, police stations and barracks as well as hotels and public buildings.

There are only two street indexes for the 1841 census. They have been digitised and are made available as pdf files that are several megabytes in size. PDF files require Acrobat Reader. Download Acrobat Reader free

If you can’t find a particular street it may not have existed in 1841 or may have had a different name.