The 1891 census was taken on Sunday 5 April under the provisions of the Act for Taking the Census of Scotland (53 & 54 Vict c.38).  The Commission appointed under the Local Government (Scotland) Act 1889 was still in the process of assessing the boundaries of civil parishes and counties at the time.

There were several changes and one new question:

This example is from the 1891 census for the hamlet of Balgown in the parish of Bracadale on the Isle of Skye (our reference 1891/109/3, page 2).  It shows that most of the inhabitants spoke both Gaelic and English.  The minister is the only employer. 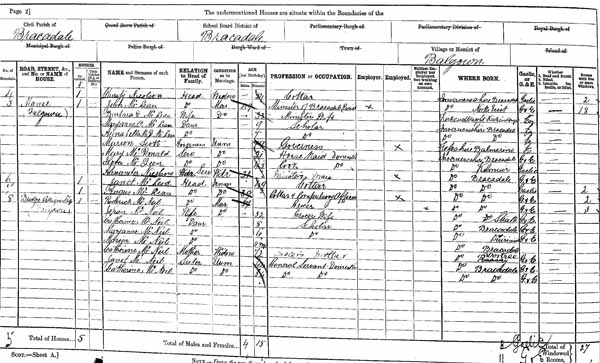 Census street indexes provide registration district (RD) and enumeration district (ED) references for each street in a city or urban area.  They also cover institutions such as asylums, hospitals, workhouses, prisons, police stations and barracks as well as hotels and public buildings.

There are 22 street indexes for the 1891 census. They have been digitised and are made available as pdf files that are several megabytes in size. PDF files require Acrobat Reader. Download Acrobat Reader free

If you can’t find a particular street it may not have existed in 1891 or may have had a different name.