The 1911 census was taken on Sunday 2 April under provisions in the Census (Great Britain) Act 1910.  The records were released on 5 April 2011 following the end of their 100 year closure period. 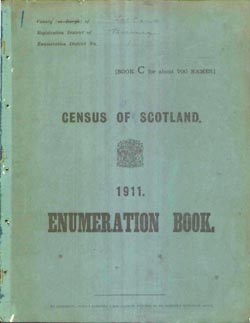 The 1911 census records of England, Wales and Ireland are the original schedules as completed by heads of households, institutions and vessels.

The Scottish records are the enumeration books which contain information transcribed from the household schedules as with all previous censuses back to 1841.  They are made available as full colour images.

The Scottish household schedules were destroyed after the completion of work on the census.

There were changes to several others:

In this example from 1911 census for the district of Eyemouth in Berwickshire (our reference 1911/739/1, page 5) you can see that with the additional columns the entries now span two pages in the enumeration book. Click on image to view the full size. 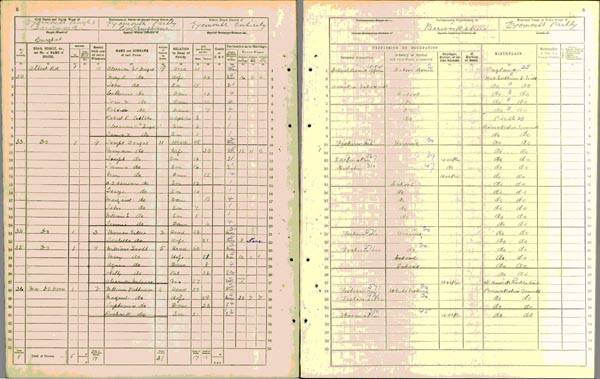 The guide ‘Instructions to local officers as to their duties in taking the census’ (pdf) shows that the police were asked to assist with the enumeration of persons in barns, sheds, caravans, tents and in the open air.

Suffragettes were active but the fine of £5 may have deterred them from refusing to take part in the census altogether. This detail from the 1911 census for Hoprig Mains, Gladsmuir in East Lothian (our reference 1911/708/3, page 12) includes an entry for Catherine Blair, founder of the Scottish Women’s Rural Institutes, who gave her occupation as farmer’s wife (suffragette).

A mechanical system of punch card tabulation was used for the first time. The Census Office in Edinburgh hired Hollerith machines which had been used successfully in the United States of America for their 1890 census. This speeded up processing and allowed for the publication of more detailed tables.

Census (Scotland) 1911 - Card Punching Staff – Names and Record of Service (pdf) is taken from the Census Office establishment book (our reference GRO4/27/2). The final entry for the boy messenger, Walter Urquhart, shows that he served as a private in the First World War and had been reported missing in action. For further information please go to the Gallipoli 28 June 1915 page in the First World War section of this website.

There are 31 street indexes for the 1911 census. They have been digitised and are made available as pdf files that are several megabytes in size.

If you can’t find a particular street it may not have existed in 1911 or may have had a different name.