The 1861 census was taken on Sunday 7 April under the provisions of the Census of Scotland Act 1860.  It was the first census following the introduction of statutory civil registration in 1855 and the Registrar General for Scotland was given responsibility for its administration.

In 1861 there were two new questions about:

This example is from the 1861 census for St Quivox in Ayrshire (our reference 1861/612/1, page 3). The number of rooms with one or more windows is five for the two farmers but only one or two for the ploughman, farm servant and weaver. In large houses the figure would be 10 or more while at Skelmorlie Castle in the parish of Largs it is 29. 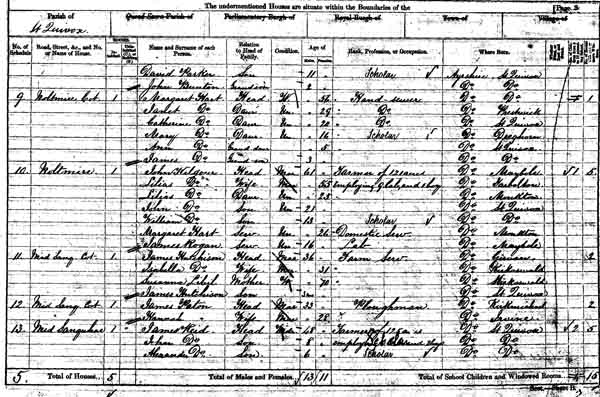 Local registrars divided their districts into enumeration divisions of approximately 200 houses. Institutions such as hospitals, prisons and hotels with over 50 inhabitants were enumerated separately. In other respects arrangements followed those of the 1851 census. You can find further information about the running of the census and the abbreviations used for occupations and relationship to the head of household in this pdf copy of a typed transcription of the ‘General instructions to the enumerator’.

There are 16 street indexes for the 1861 census. They have been digitised and are made available as pdf files that are several megabytes in size. PDF files require Acrobat Reader. Download Acrobat Reader free

If you can’t find a particular street it may not have existed in 1861 or may have had a different name.