The question on the number of children attending school was dropped because this information could be inferred from age and occupation ("scholar”).

For the first time there was a count of the number of Gaelic speakers in each locality and the definition of a house differed from that used in England.  The Scottish version included dwellings with a door opening onto a common stair to more accurately reflect households within tenements.  This example from the 1881 census for Govan shows the occupants of tenement buildings at 6 Alma Street (our reference 1881/646-01/19, page 7). 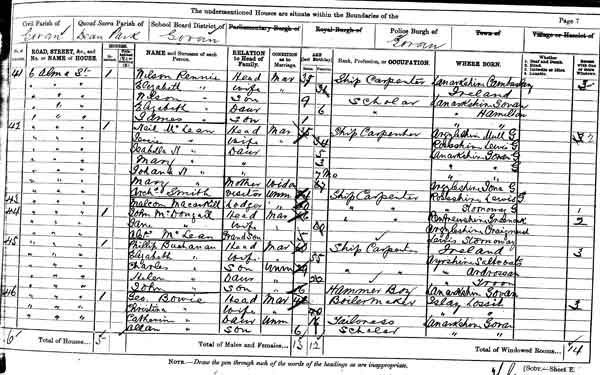 Census street indexes provide registration district (RD) and enumeration district (ED) references for each street in a city or urban area.  They also cover institutions such as asylums, hospitals, workhouses, prisons, police stations and barracks as well as hotels and public buildings.

There are 29 street indexes for the 1881 census.  They have been digitised and are made available as pdf files that are several megabytes in size. PDF files require Acrobat Reader. Download Acrobat Reader free

If you can’t find a particular street it may not have existed in 1881 or may have had a different name.