The 1871 census was taken on Sunday 2 April under the provisions of the Act for taking the Census in Scotland (33 & 34 Vict, c.108).  Customs officials dealt with returns from vessels in harbours and docks or trading along the coast.  Instructions were supplied to the Lords of the Admiralty for the enumeration of persons on board Royal Navy vessels in Scottish waters.

There were no new questions but the following changes were made to those asked in 1861:

This example from the 1871 census for Old Machar, Aberdeenshire (our reference 1871/168-2/14, page 46) includes the Blind Asylum.  The head of the institution has provided additional information about whether the person was blind from birth or from a particular age. 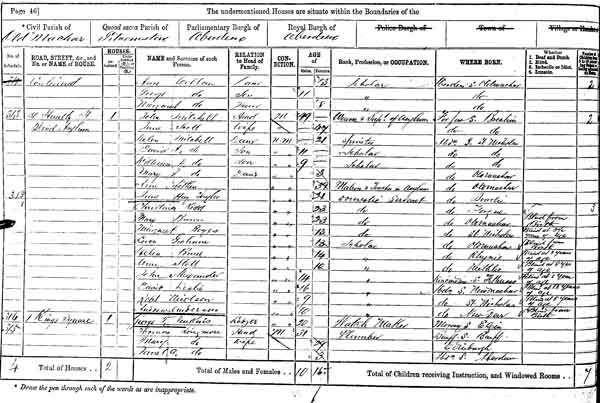 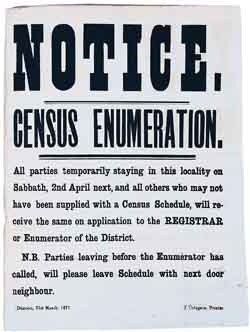 You can find further information about how the census was taken in this typed transcription of Instructions to the enumerator as to his duties in taking the census (pdf).

It shows how the census covered travellers, visitors in hotels, large establishments and vessels on canals and navigable rivers.

If someone had stayed overnight but left without providing their name and other details to the person completing the household schedule the enumerator had to record not known (N K).

From this census onwards returns from the Royal Navy have been given registration district reference 902S and those for the Merchant Navy reference 903S.

There are 35 street indexes for the 1871 census. They have been digitised and are made available as pdf files that are several megabytes in size. PDF files require Acrobat Reader. Download Acrobat Reader free

If you can’t find a particular street it may not have existed in 1871 or may have had a different name.