The 1851 census was taken on Sunday 30 March under provisions in the Census Act 1850 (13 & 44 Vict c.53) - the last before the introduction of compulsory civil registration in 1855.  In Scotland enumeration duties were carried out by the official schoolmaster in each parish and the sheriff deputes (for counties and stewartries) and provosts (for burghs).

The 1851 census contains more information than the 1841 census and provides a useful bridge between the Statutory Registers of Births, Deaths and Marriages and the Old Parish Registers.

You will find the name of the street or road, number or name of house, the name of each person in the house, their relationship to the head of the family, their marital status, age, sex, rank, profession or occupation, birthplace (town and county) and whether they were blind or deaf and dumb.

Exact ages are recorded but it is best to treat the data with caution because registration of baptisms was inconsistent and some people would have been unsure of their birth date.  In this example from the 1851 census for Linlithgow (our reference 1851/668/6, page 11) there's an entry for John Campbell aged 106, labourer, who is living with his 55 year old wife and children. 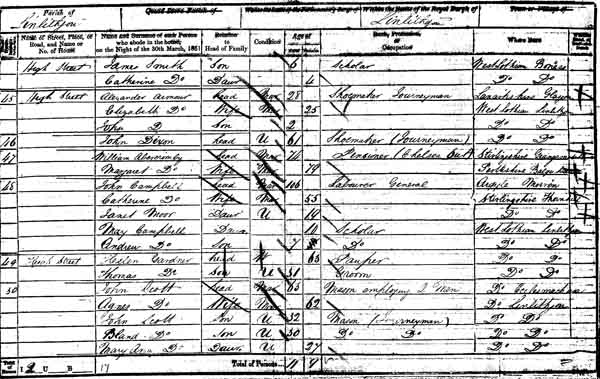 Coverage was extended to people:

Additional information can be found in the indexes to seamen's crewlists, records of Scottish merchant seamen who were in port or away from home in 1851.  They are available in the ScotlandsPeople Centre in the eLibrary section of the Centre's network.  The original records are held by The National Archives in the BT series.

1851 Census of Religious Worship and Census of Education

This was done on a voluntary basis and the results were incomplete.  The Scottish returns haven’t survived but the results were published in a report Religious worship and education, Scotland, 1851 which is available on Histpop - the Online Historical Population Reports website and includes sample forms. Ecclesiastical census returns for some English counties are held by The National Archives in Home Office files (reference HO 129). In a few cases they also include returns for the 1851 educational census.

The 1851 census had a different numbering system to the other censuses, the Statutory Registers of Births, Deaths and Marriages and the Old Parish Registers.  You shouldn't find this a problem because the 1851 census index and street indexes have been given the standard references.  This pdf copy of our search room guide to 1851 census references was produced when the records were accessed on microfilm.  It has tables showing original and standard references for the main urban areas and is useful if you come across the original references in census indexes or guides produced elsewhere.

Census street indexes provide parish or registration district (RD) and enumeration district (ED) references for each street in a city or urban area. They also cover institutions such as asylums, hospitals, workhouses, prisons, police stations and barracks as well as hotels and public buildings.

There are ten street indexes for the 1851 census. They have been digitised and are made available as pdf files that are several megabytes in size.  PDF files require Acrobat Reader. Download Acrobat Reader free

If you can’t find a particular street it may not have existed in 1851 or may have had a different name.