The 1901 census was taken on Sunday 31 March under provisions in the Census (Great Britain) Act 1900, 63 Vict. c.4.  The boundaries of 287 of the 881 civil parishes had changed since the 1891 census by orders of the Boundary Commission appointed under the Local Government (Scotland) Act 1889.

There were several changes to the questions that had been asked in 1891.

There was an additional question on occupation to find out the number of people who carried out their trade or industry at home.  In this example from the the 1901 census for Unst in Shetland (our reference 1901/11/4, page 15) most of the women were involved in the knitting industry on their own account and worked at home. 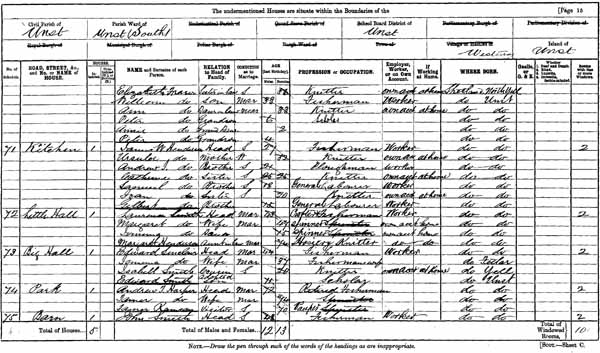 From the 1871 census onwards returns for the Royal Navy have been given registration district reference 902S and those of the Merchant Navy reference 903S.  In 1901 the following references were added

There are 36 street indexes for the 1901 census. They have been digitised and are made available as pdf files that are several megabytes in size. PDF files require Acrobat Reader. Download Acrobat Reader free

If you can’t find a particular street it may not have existed in 1901 or may have had a different name.