The Battle of Loos was fought from 25 September until about 16 October 1915 in an area of coalmines and mining villages near the town of Lens, north of Arras. Six British divisions attacked strong German defences in support of French offensives to the south.

The attackers suffered very high casualties in capturing the village of Loos, Hill 70 and the formidable Hohenzollern Redoubt, including some self-inflicted losses from the use of chlorine gas against the Germans. Worse came as British units tried to repel German counter-attacks. Despite initial successes and hopes of a breakthrough, the British lost the ground they had gained. By the time the battle ended British losses in men killed, wounded or missing amounted to over 60,000.

Half of the 72 battalions in the assault on 25 September belonged to Scottish regiments. Twelve Regular, Territorial and New Army Scottish battallions formed part of the 1st, 2nd and 7th Regular Army divisions. Twenty-four other battalions, consisting of volunteers, formed the 9th and 15th Scottish divisions in Kitchener's New Army.

As a consequence the heavy casualties in the battle affected communities throughout Scotland from which men had joined in large numbers. Dundee, for example, mourned men of the 1/4th Black Watch, a Territorial battalion mostly consisting of Dundonians, which lost 230 men killed or wounded out of 420. Another Black Watch battalion, the 9th, was one of eight Scottish battalions (out of twelve British battalions) that suffered the high level of more than 500 casualties. In its case, the heavy losses of this volunteer battalion were felt by families not only in Angus but in parts of Fife, Perthshire, Aberdeenshire, Stirlingshire, Lanarkshire and Ayrshire. 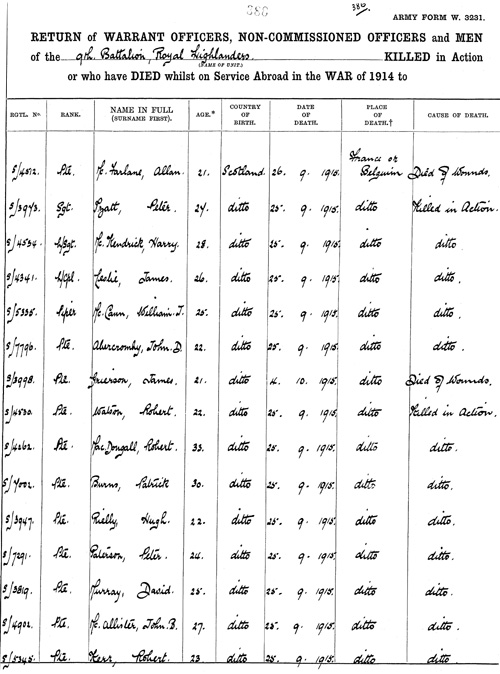 The experiences of soldiers from other Scottish units are reflected in documents held in National Records of Scotland.

During the Battle of Loos Private Robert Dunsire earned the Victoria Cross, the highest award for gallantry, for 'most conspicuous bravery on Hill 70' on 26 September, when he twice braved heavy enemy fire to rescue wounded comrades of the 13th Battalion The Royal Scots.

He was born in Buckhaven, Fife, the son of Thomas Dunsire, a coalminer, and his wife Elizabeth. Robert also became a miner, and on 22 July 1914 married Kate Pitt. They set up home at 210 Denbeath, Methil, but did not have children. Dunsire enlisted on 6 January 1915, and was posted to France with his battalion on 9 July, days after making his will. The award of the Victoria Cross was announced in the 'London Gazette' in November 1915, but the gallant recipient was killed in action two months later, on 30 January 1916, aged 24, and was buried at Mazingarbe. 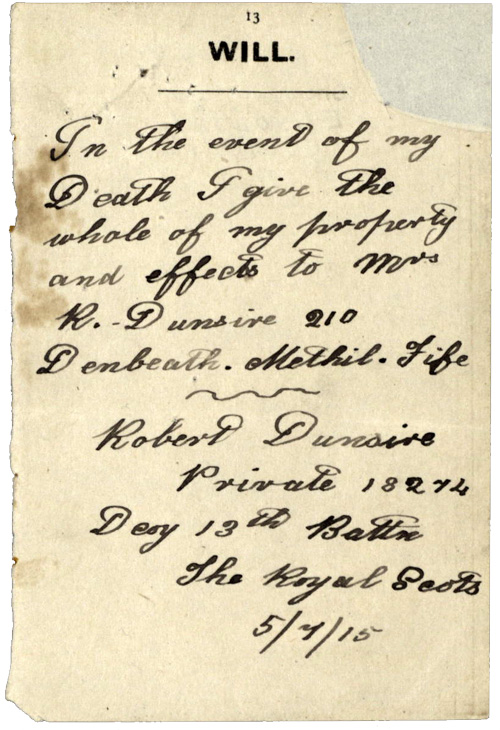 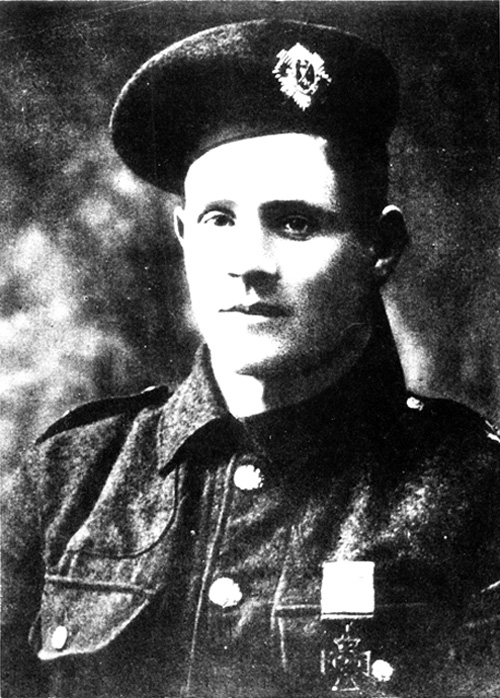 Sergeant George Lawson or Lowson, 2nd Battalion Argyll and Sutherland Highlanders, died on the first day of the Battle of Loos, when 2nd Division advanced in support of 9th Division's attack on the Hohenzollern Redoubt. His body lies with those of 78 comrades of the battalion, and over 150 men from other regiments, all killed on 25 September. They were buried in an extension to the village churchyard at Cambrin, close to the northern part of the front line at Loos.

George Lawson was born George Lowson on 2 November 1885 in the Perthshire village of Alyth. His parents were William Lowson, a farm servant, and Mary Taylor Edward. William moved with his family to Dundee and later to Govan, where he worked as a butcher, as did his son George after he left school.

In a partly light-hearted letter to his sister on 18 September 1915 Lawson told her of his promotion to sergeant: 'I have taken on again'. Their brother John, serving as a private in the 1st Battalion Seaforth Highlanders, had died in France on 9 May 1915. As their mother had experienced 'trouble' in getting his effects, George wanted her to know that in his own will he was leaving everything to her. He reckoned he had 'a sporting chance' of surviving 'this rumpus'. One week later he was killed in action.

A statement by a senior NCO, Company Quartermaster Sergeant J W Galbraith, explains why Lawson's letter was preserved as evidence of his will. He had witnessed Lawson's burial, but no identity disc or pay book was found with his body, nor the jacket in which he would have kept his pay book. Galbraith was also able to corroborate the terms of his will, because Lawson had shown it to him.

Although George wrote his name as Lawson, his surname appears as Lowson in several records, and he wrote to his sister as Miss Lizze Lowson. Her address, 95 Shields Road, Govan, Glasgow, was where their mother ran a dairy business with the help of the family. 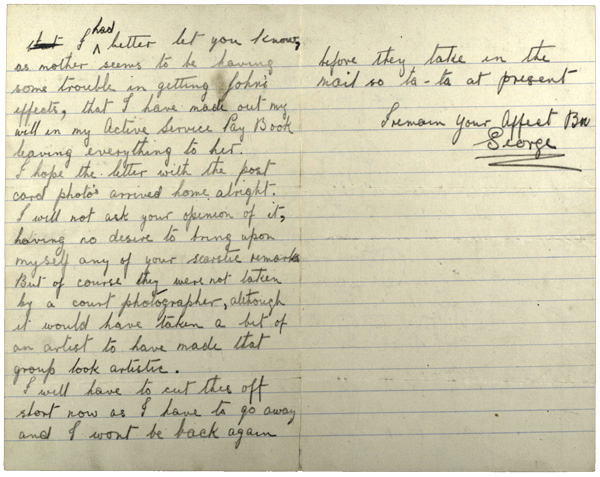 Born one of twins in New Monkland in 1890, Robert Easton became a coal hewer like his father. In 1914 he enlisted in Airdrie, and served in C Company of the 10th Battalion Highland Light Infantry. He married Mary McKay on Hogmanay 1914. The battalion was sent to France in May 1915, and at Loos went into action in the first wave of 28th Brigade's assault on Auchy on the British left wing, as part of 9th Division's assault. Easton was one of almost 650 casualties the 10th Battalion suffered, mainly from machine gun and artillery fire.

Thanks to a newspaper report ('Daily Record', 13 October 1915), we know that Easton was wounded on the first day of battle, that his wife visited him in hospital at Boulogne, was with him when he died of his wounds on 6 October 1915, and attended his burial in Boulogne Eastern Cemetery. As this was very unusual, Mary Easton may have been working as part of the war effort in France. On 10 May 1916 she married Private John Pringle of 11th Battalion, Highland Light Infantry, who survived the war. 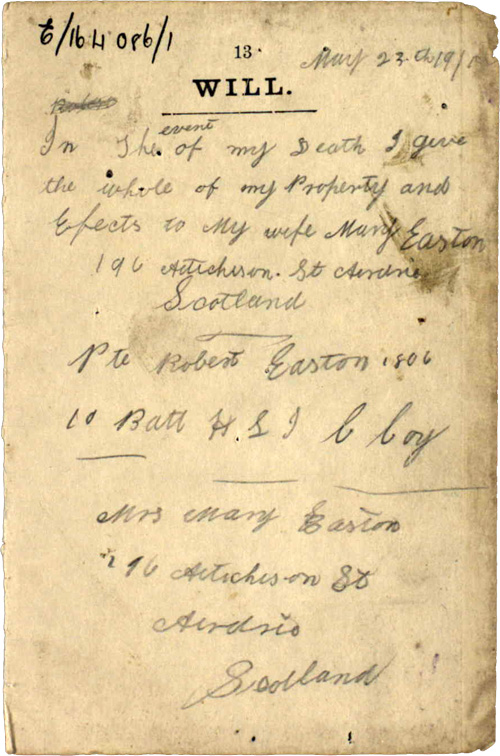 Read more about the Soldiers' and Airmen's Wills in our records guide.