On Sunday 1 November 1914 the entire staff of Lerwick Post Office were arrested under orders from Lieutenant-Colonel H C Evans, Officer Commanding the HM Forces in Shetland during the First World War. Following confidential instructions, delivered by warship, from Vice-Admiral Sir Stanley Colville,  the surprised Shetlanders were marched under armed naval escort to Lerwick prison and crammed into eleven cells. Their homes were also searched.

The curious incident and the indignation surrounding it are recorded in a series of government files at National Records of Scotland (HH31/17/1-6). 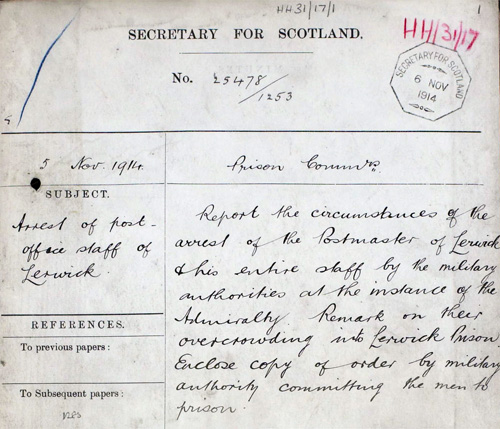 Lieutenent-Colonel Evans gave instructions that the detained post officials were 'not to be treated as prisoners but as persons under arrest'. Unlike ordinary prisoners, they were allowed to smoke and play musical instruments and their families were required to take food and bedding to the prison.

The civilians were initially told that they were being arrested under sections 12 and 13 of the Defence of the Realm Regulations, concerning the extinguishing of lamps and movement of citizens, but no charges were made. Only the Postmaster, James McMaster, was confidentially informed of the reason for the detention; a suspicion that secret correspondence for the Fleet was being tampered with as it passed through Lerwick Post Office. No evidence was found to support this suspicion and the post officials were eventually freed without ever having been told the grounds for imprisonment or reasons for release. 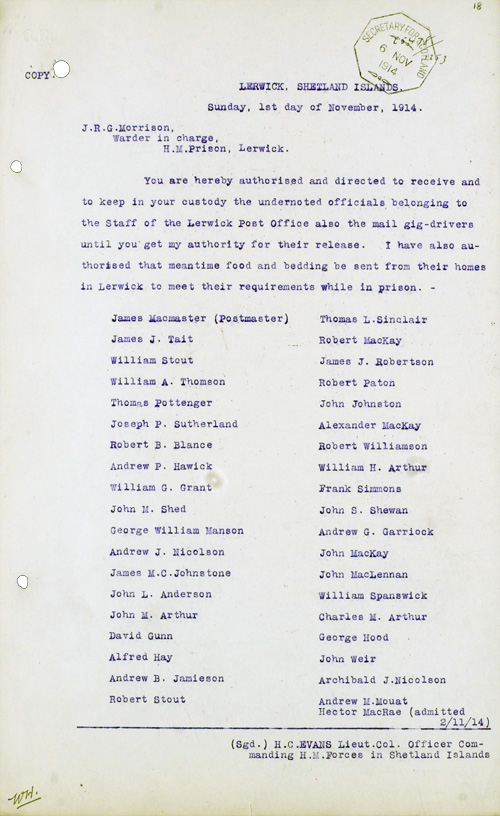 The Lerwick prison register (HH21/66/12) records that on 3 and 4 November eight of the men were released to go back to work, including five who were based in Aberdeen, Edinburgh, Stornoway and Helmsdale, and three skilled workmen from Lerwick. The other sorting clerks, telegraphists, postmen, mail gig drivers, linesmen and cleaner all remained incarcerated for a further three days, including one 16 year-old auxiliary postman and seven other teenagers. Amongst the other prisoners were William and Robert Stout, the sons of Robert Stout, the Provost of Lerwick and retired Postmaster of Lerwick.  On 7 November a telegram was received with Colonel Evans' order to release the men and boys and by 11am everyone had been discharged from custody. For Lerwick and the GPO however, the matter was not over. 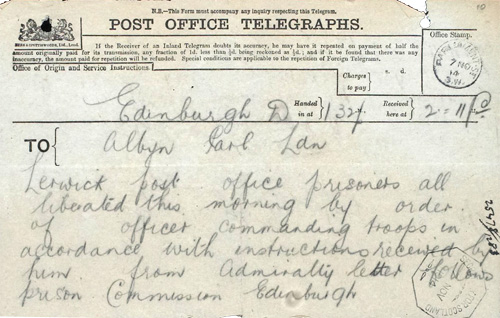 Telegram with orders for release of Lerwick prisoners,
National Records of Scotland, HH31/17/2/10

Upon release Postmaster McMaster expressly called on visiting prison inspector, David Crombie, to convey thanks to Warder John Morrison on behalf of all the interned workers 'for making their lot as tolerable as he could under the circumstances' (HH31/17/4/5). Crombie's report reveals that the local people displayed quite a different attitude towards the Armed Forces however. He notes that 'The arrest and marching of the men through the streets and the parade thrice daily of respectable people taking food to the prison have aroused a feeling of intense indignation amongst the people... The people regard the incident as an insult to their quiet little town, and a serious aspersion on their good name and character' (HH31/17/4). 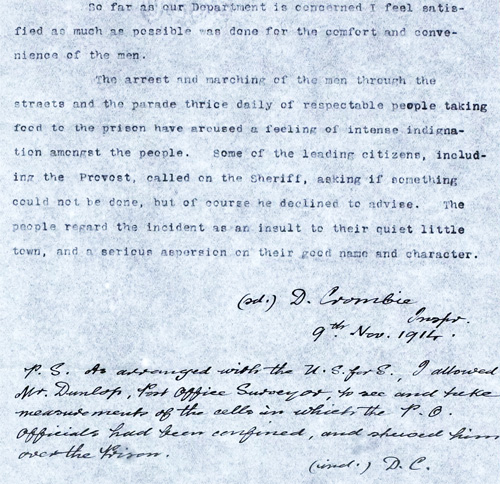 Following release of its employees, the General Post Office requested that the prison records relating to the wrongful arrests be destroyed. Writing to Sir James Dodds, Under Secretary for Scotland, Mr Murray of the General Post Office urged that the prison register entries be rendered completely unintelligible because 'The staff have been, and are still, very much disturbed at their treatment, and the Postmaster General is anxious that everything possible be done to soothe their feelings and to prevent any public manifestation which they are now threatening' (HH31/17/6/5). The Prison Commissioners and the Scottish Office rejected this request to interfere with the official record and argued that 'It was a matter of notoriety that these Postal officials had been arrested, and destroying any record of the fact will not alter the fact'. Indeed, the incident had already reached the national press. 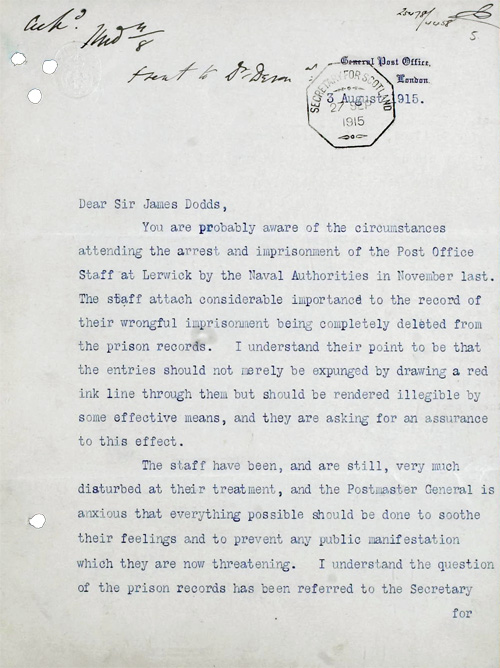 On 14 November, 'The Scotsman' had reported the incident, pointing out that Colonel Evans' attempt to run the Post Office with the Territorial Army and Royal Navy Reserve had been a 'conspicuous failure', causing further resentment amongst the locals. The 'cutting off of telegraphic facilities was a distinct public grievance, to say nothing of the inconvenience in cases of business urgency and illness'. The 'Glasgow Herald' reported that it was after one of the Territorial soldiers collapsed following seventeen hours at the telegraph machine, that some of the prisoners were freed to report for GPO duty.

In 1915 a compromise was reached about the prison register. It was agreed that a note be inserted at the bottom of the register stating that 'All the above named men were released at the instance of the Admiralty who expressed themselves satisfied that the charges against them were wholly unfounded'. Subsequently the pages of the prison register were also sealed up. A photograph of the entries before the note was added is preserved in the government file (HH31/17/6). Feelings still ran high at the end of the war; an excerpt from the County Council of Zetland meeting held on 19 December 1918 reveals that the Islanders still wanted justice: 'a public apology from the Authorities, and an admission that they were in the wrong' (HH31/17/6/4). It does not appear that this was forthcoming.

For more information about prison registers see the crime and criminals guide.