The First World War took a devastating toll of Scots who put on uniform and served in the armed forces, and it subjected their families at home to enormous anxiety, suffering and grief.  The war not only affected Scots on a personal level, but also had an impact on the civilian population as a whole. The story of one family reveals some of the individuals behind the official statistics published by the Registrar General for Scotland at the time.

The Cowie family was in some ways typical of many Scottish urban households before 1914. The parents came from rural backgrounds. John Cowie had moved to Glasgow and found work as a railway clerk, and later as an insurance agent. His family was large compared to typical families today. 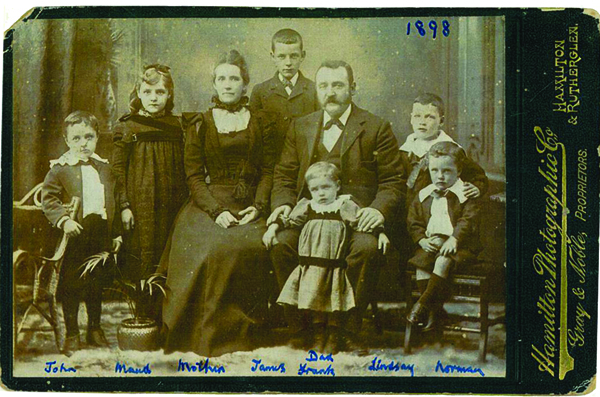 In the over-crowded tenements of urban Scotland in 1914, disease, chronic complaints and poor nutrition were widespread, affecting people’s life expectancy and health. The 1911 census revealed that about half of the population lived in either one- or two-room houses. In some towns in the industrial central belt the figure was much higher.

By 1911 the Cowies were better off than many families in Glasgow. They lived at 93 Sommerville Drive in Cathcart, where John Cowie rented a large tenement flat with seven rooms that had at least one window. However, he and his wife had more children to accommodate than their neighbours, so they took in two boarders to help the household budget.

Scotland Then and Now

These 'population pyramids' for 1914 and 2013 show the estimated numbers by age, group and gender. One hundred years ago many children died young, and each age group was larger than the one above it. Nowadays there are far fewer deaths in infancy, Scots are living longer, and many more are living to be centenarians. These changes have resulted from medical and social advances, as well as a falling birth rate.

The most common causes of death, 1914 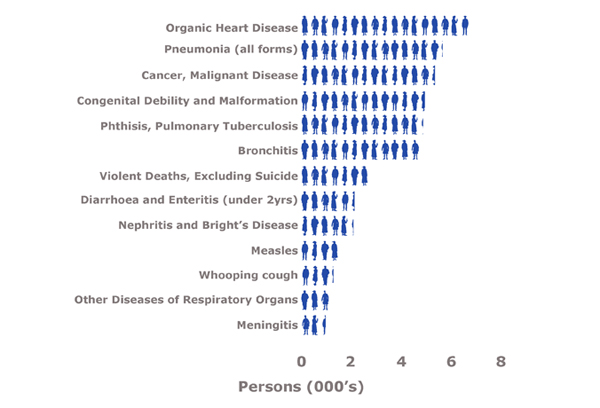 The chart highlights the most common causes of death in 1914. Whooping-cough and phthisis (another name for tuberculosis) claimed fewer lives that year than previously.

The huge increase in life expectancy during the past century can be seen in the average ages that Scots could expect to reach.

The Cowies, like many families, suffered the death of a child. Their second son, William, died aged 9 in 1895 from a form of heart disease, which was a common cause of death, especially among the young. William's six siblings survived into adulthood, but the Great War was to shatter their lives. 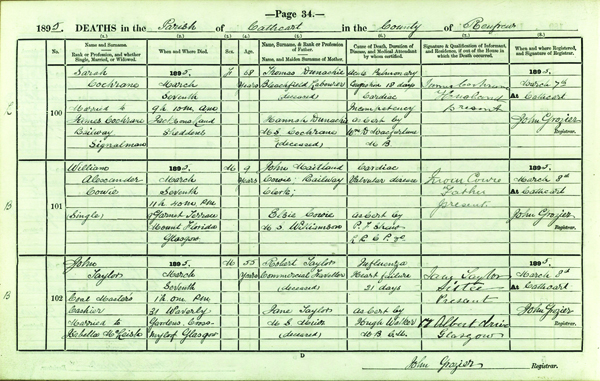 The Cowies and the Great War 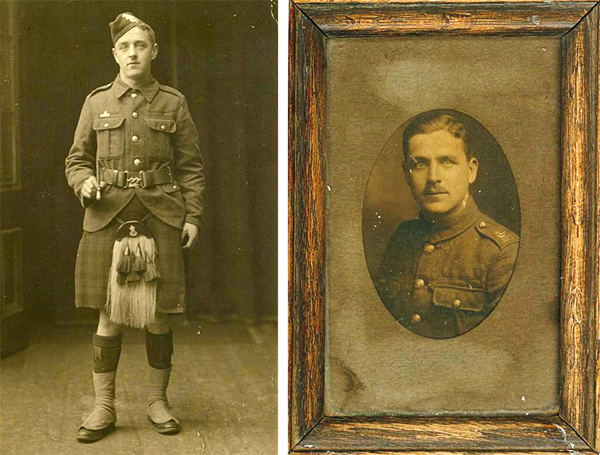 An accepted total of the Scottish war dead has yet to be calculated. Estimates vary between 100,000 and 135,000. The higher figure is the total of the names inscribed on the rolls of honour of the Scottish National War Memorial, which includes Scots who had left Scotland before the war, but returned to serve. Deaths of military and naval personnel were not included in the Registrar General's annual reports, but were recorded in special registers, the Service Returns of Death and Marine Registers, that can be searched on ScotlandsPeople.

All five of the Cowie brothers served during the war. Three died on active service during 1915, and two survived.

James Williamson Cowie (b.1884), a postman who served in the Royal Naval Volunteer Reserve, and was killed at Gallipoli in July 1915, leaving a wife and two children.

Lindsay Steven Cowie (b.1890), an unmarried office clerk who joined the Queen's Own Cameron Highlanders, and died in the battle of Loos in September 1915, on his 25th birthday.

John Cameron Cowie (b.1894), a distillery clerk and territorial soldier with the 9th Bn (Glasgow Highlanders) Highland Light Infantry. He was killed in action in March 1915, aged 22.

Frank Hamilton Cowie (b.1896), a warehouseman who was conscripted in 1916. Because his brothers were posted missing he was exempted from overseas military service. After the war he married, emigrated and became a successful businessman in South Africa, where he died in 1975. 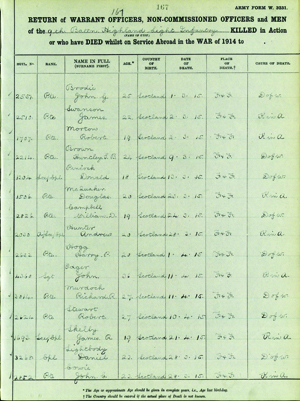 Death on the Home Front

In 1915, the year after the outbreak of war, deaths of civilians increased by about 8,000 to a total of 82,000. The next peak occured in 1918, when some 78,000 deaths were registered, an increase of almost 9,000 over 1917. The deaths largely occurred from September onwards as a result of the severe influenza epidemic known as the 'Spanish Flu', which was virulent amongst young adults. Soldiers returning home unwittingly spread the virus. Doctors often cited pneumonia as the eventual cause of death on death certificates, but the influenza also weakened resistance to other infections, which could be given as the cause of death. 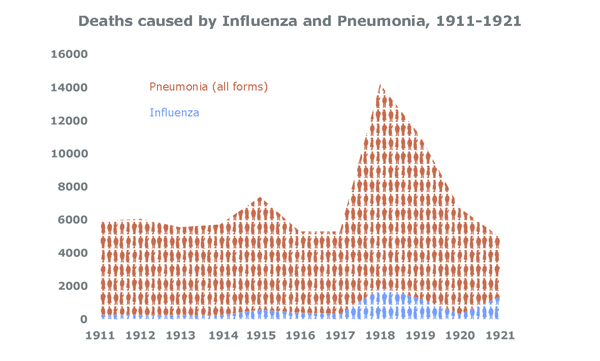 Impact of the War

After 1914, with so many young men away on military service, there were generally fewer births. The year 1917 saw the fewest registered births since 1855, and fewer babies were born to unmarried mothers. Marriages also decreased, dropping by 6,000 between 1915 and 1917.

The end of hostilities in 1918 changed the picture: marriages grew by about 17,000 between 1918 and the peak of almost 47,000 in 1920. The inevitable 'baby boom' followed. The year 1920 was and remains a record year for births: almost 137,000 children were registered, about 30% more than the average of the previous five years. This 'baby boom' was far more dramatic than the booms experienced at the end of the Second World War, or even in the 1960s.

Population at a record high

In 1919 the population of Scotland was estimated at 4,823,000, the highest since 1855. This figure continued to grow, peaking at almost 4,898,000 in 1922. Rising emigration during the 1920's in which the Cowie family took part, as well as falling marriage and birth rates, helped reduce the population total. 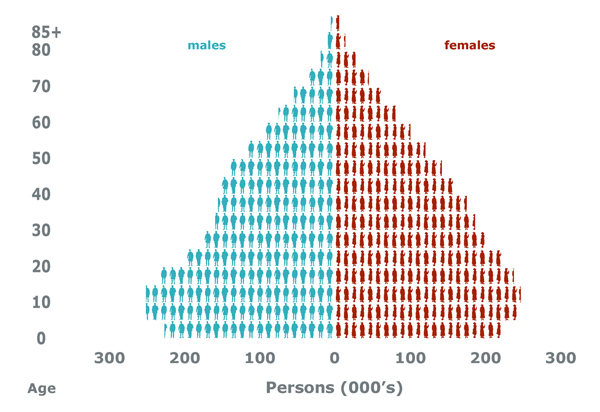 Deaths caused by the war and the 1918 influenza epidemic drastically reduced the number of men in the 20-40 age group. The lower numbers of men can be seen clearly in this population pyramid for 1919.

The triumph of hope

After James Cowie's death in action, in 1919 his widow Margaret Macdonald was remarried at the age of 37 to John Ballantine, a widowed joiner. However, they did not contribute to the post-war baby boom. Ballantine's first wife had died in 1916 from tuberculosis (TB), then the fourth biggest cause of death in Scotland. Glasgow had the highest death rates from TB in Scotland. The highest death rates from TB occurred in Glasgow.

Maud Cowie continued to work as a hairdresser after the war. At the comparatively late age of 33 she married John Ferguson, a chief officer in the Merchant Service, serving on the SS Florentino. The marriage took place according to custom in her parents' house at 129 John Street, Glasgow, and her brother Norman was a witness. The couple had one child, Elspet Williamson Ferguson (1924-1967).

This feature is based on 'Scotland's People and the First World War, 1914-1921', a display marking the centenary of the outbreak of war, at General Register House, 14 August - 19 September 2014, and Chapter 11 of The Registrar General for Scotland's 'Annual Review of Demographic Trends', in which Scottish demographic trends connected to the First World War can be explored further.

With thanks to the family of Frank Hamilton Cowie for permission to use family photographs.