On 25 April 1915 the first Allied troops landed at Cape Helles on the Gallipoli peninsula, but the initial assaults against the Turkish defences made little ground. Among the battalions of the British 29th Division that took heavy casualties were 1st King's Own Scottish Borderers, a regular battalion, and 1/5th Royal Scots, a Territorial unit. A week after the landing, the British force had suffered a staggering 8,500 casualties among other ranks, and about 400 officers.

In order to break the ensuing stalemate it was decided to deploy among other reinforcements the 42nd (East Lancashire) Division and the 52nd (Lowland) Division. The 52nd comprised twelve Territorial battalions from six Scottish regiments grouped in three brigades, the 155th, 156th and 157th. At the start of their journey to Gallipoli, many men of the 1/7th Royal Scots battalion were killed or injured in the rail disaster at Quintinshill near Gretna, on 22 May.

With reinforcements in place, a major attack by the allies was mounted on 28 June. 156th Brigade, including 1/5th and 1/7th Royal Scots, suffered very heavy casualties from the Turkish machine guns, which were not suppressed by British artillery fire. The strong local ties of these two battalions meant that the loss of 337 men, and the wounding of 300 more, dealt particularly heavy blows to families in Leith and Edinburgh.

Among those killed in 1/5th Royal Scots was an 18-year old private, Walter Urquhart. He was born in Leith on 7 June 1897, the son of Walter Urquhart and his wife Eliza Jane Bonar. On reaching the age of fourteen young Walter left school and on 24 July 1911 joined the census staff of the General Register Office, who were then working hard on the newly-taken census. Around this time he posed with his colleagues for a group photograph in the garden beside New Register House. As a messenger boy Walter earned 7 shillings per week until 13 January 1912, when his wages rose to 9 shillings. On 11 October 1913 he left the GROS to become a packer at Jenners, Edinburgh's well-known department store. 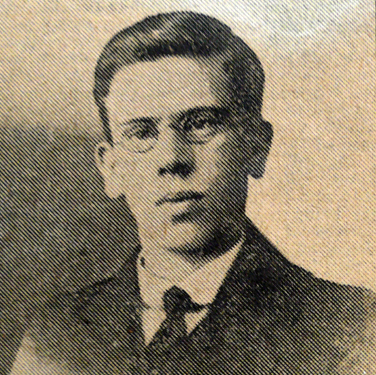 Photograph of Walter Urquhart from the Evening Despatch, 1915,
National Records of Scotland GRO4/27/2

A photograph printed in the Evening Despatch, 22 September 1915 records the fact that months later Walter was still officially 'missing in action' in the Dardanelles. Like many British casualties at Gallipoli, he has no known grave, and is commemorated on the Helles war memorial. By the end of the war his parents were living at Swan River, Manitoba, Canada, probably having joined the great pre-war wave of Scottish migration. 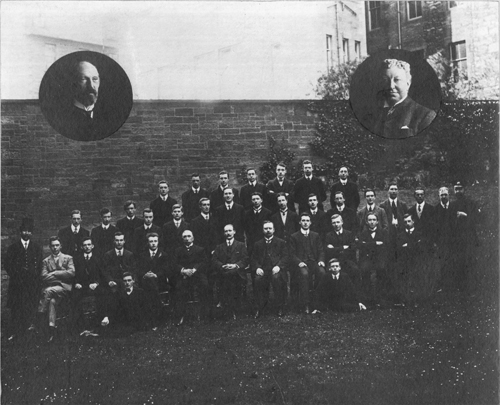 Group photograph of 1911 census staff with Walter Urquhart seated
on the ground at the right, National Records of Scotland GRO6/464/10

The losses were made worse by the casualties in the 29th Division, which was also in action on 28 June. One of those killed from 1st Bn King's Own Scottish Borderers, was Private Alexander Allen of D Company. On 15 May 1915 he wrote to his mother of his posting to the Dardanelles before embarking as part of the draft to make good the battalion's losses. He may have defied the rules about keeping operations secret, but his last letter is a touching reminder of how much soldiers appreciated letters from home. It also recorded the will that he had written in his pay book in favour of his mother in Motherwell. After the death of Lily Morris' first husband, John Allan or Allen, in a mining accident in 1889, she married another coalminer, William Nisbet in 1895, and moved to Lanarkshire from Slamannan, Stirlingshire. In 1911 Alexander, her youngest son (born in 1888), was working as a pit pony drawer, at a mine in the parish of Dalziel, near Motherwell. After he was killed in action on 28 June 1915 his pay book was not recovered from his body (he has no known grave) and his letter was accepted in place of the missing will. 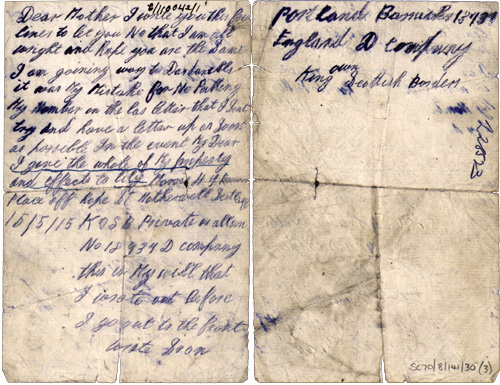 Among the 36,000 or so British fatalities from combat and disease in the Dardanelles campaign, National Records of Scotland preserves the wills of almost 600 Scottish soldiers of other ranks in the Soldiers' Wills series, in addition to wills recorded in the normal way. They can be seen in our search rooms and online via ScotlandsPeople.