On 21 March 1918, some 6,500 German guns and 3,500 heavy mortars opened up a terrifying five-hour barrage against the British Third and Fifth Armies on the Western Front. These armies were positioned to the left of the French front stretching for 70 miles from the Somme sector northwards to Flanders. Although the Allies knew an attack was imminent, where and how the main assault would occur remained unknown. The War Cabinet first heard about it at 11.30am.

The German ‘Michael’ operation aimed to break through at the weakest point of the British Front, where Gough’s Fifth Army of 13 divisions (plus 3 cavalry divisions), would be overwhelmed by 43 divisions. Simultaneously 19 German divisions would attack General Byng’s Third Army of 12 divisions, which covered 42 miles of front on Gough’s left flank. On 21 March the ‘hurricane’ barrage was followed by mass infantry attacks spearheaded by fast-moving storm troopers who penetrated the weakened British defence. The Germans exploited the re-organisation of the British Army following the huge losses of 1917; divisions had been reduced in strength, and many battalions disbanded. Moreover, the Fifth Army had only recently taken over its sector and had little time to build adequate defences in depth.

On 22 March 1918 the War Cabinet was given some idea of how many German divisions were involved in penetrating the front line and attacking the 'battle line' further back. In the absence of definite reports about British casualties, the Cabinet was told blandly that ‘Information received up to now, however, gave no cause for anxiety.’ 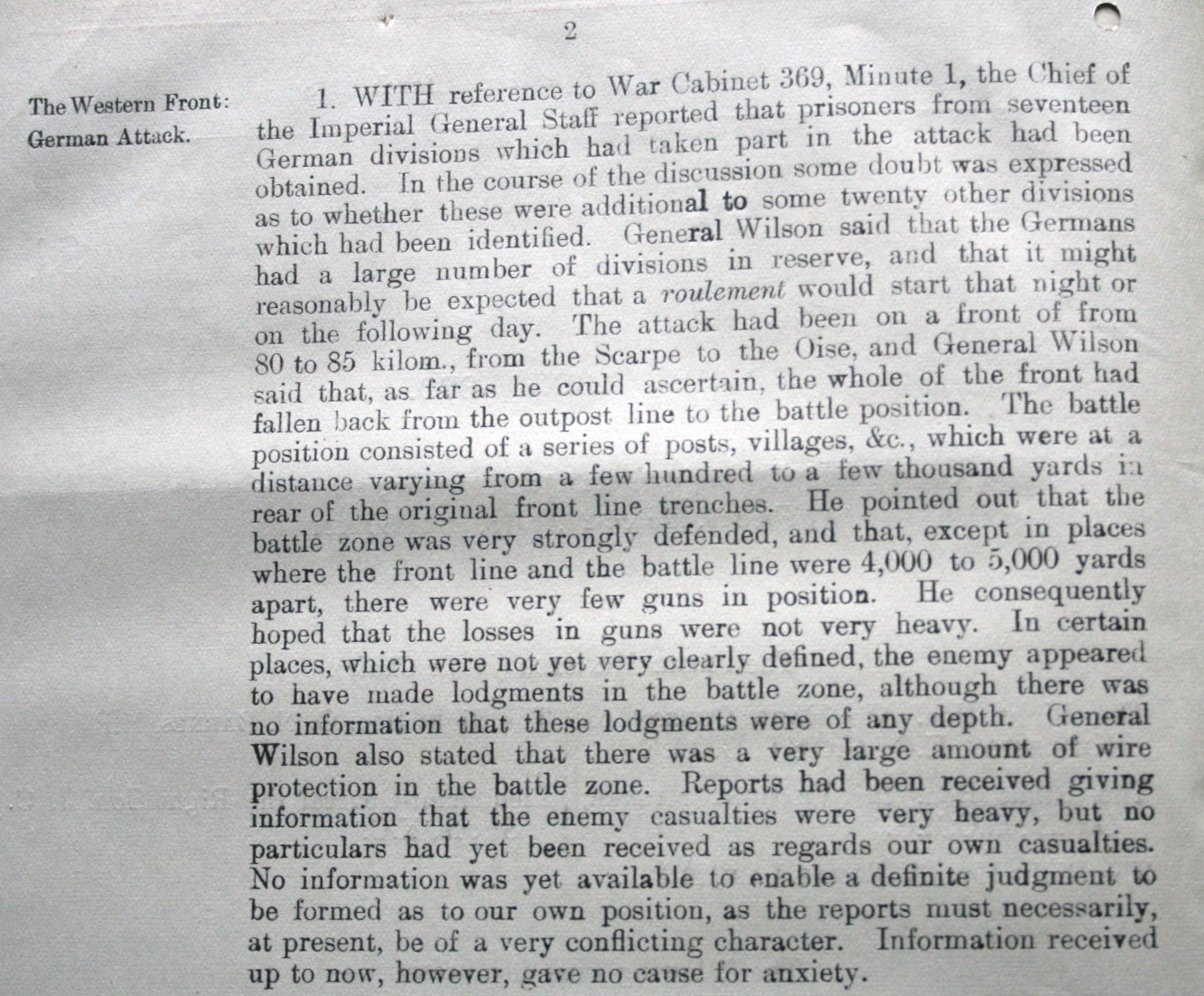 In fact, helped by fog, the German assault tactics had succeeded so well that British casualties on the first day were enormous: 38,500 men, of whom 7,000 were killed and 21,000 captured.

A more realistic picture of the scale of the attack began to emerge from the maelstrom of the assault, as many British defenders were killed, wounded or captured, and units forced to withdraw. Confusion about losses was increased because the Army gathered soldiers from many different units in the rear areas and rushed them forward as reinforcements of the fluid front line. Information about the fate of individual soldiers could remain vague. This uncertainty was reflected in the post-war Service Returns of Deaths in National Records of Scotland, available through Scotlands People. For example, most of the 23 men of the 1/7th Battalion, Black Watch who died during the opening days are listed as being killed at some point between 21 and 26 March. The unit was just one of many Scottish battalions involved in the desperate resistance along the front, and as part of  51st Highland Division it was forced to retreat. 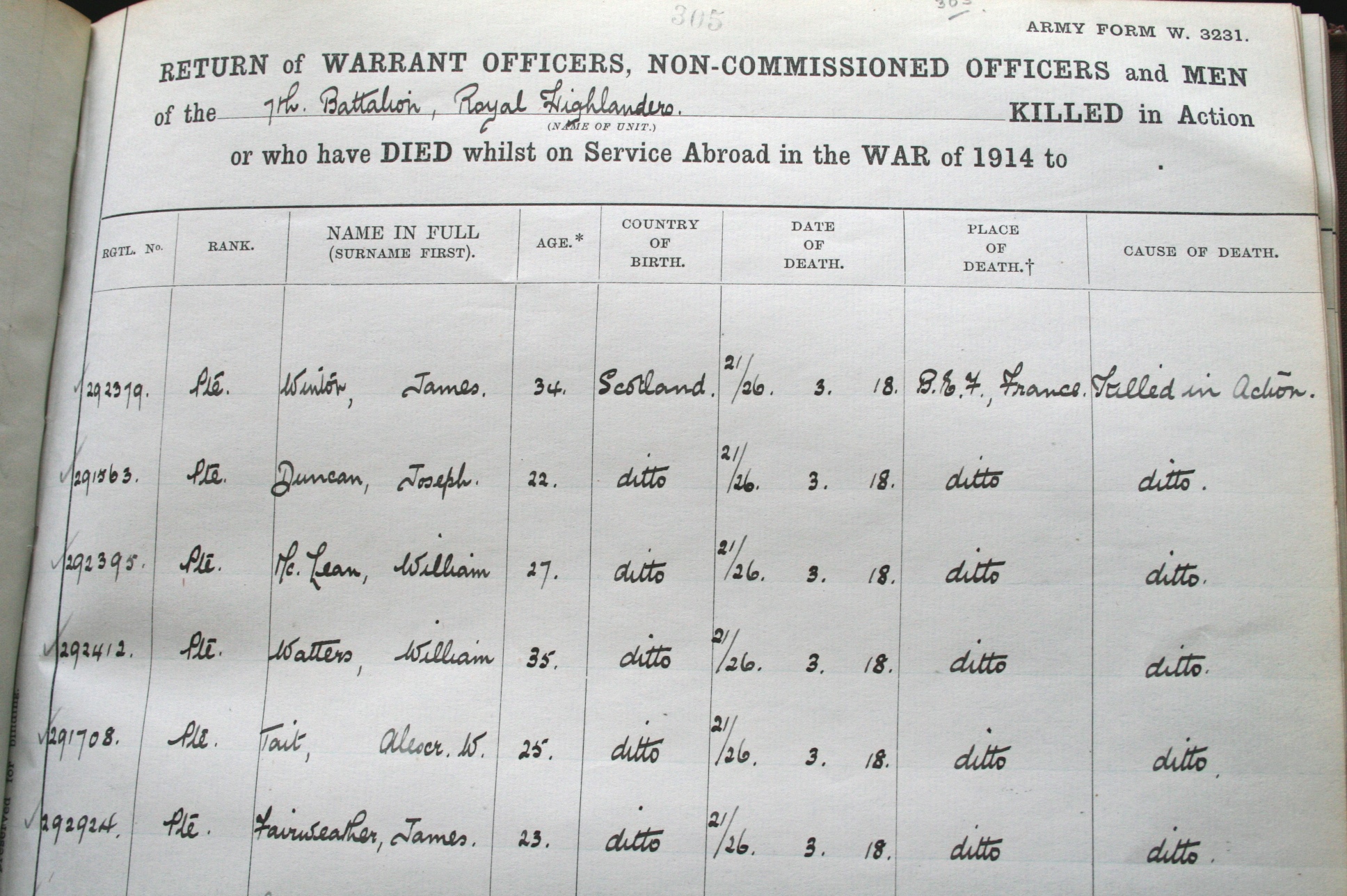 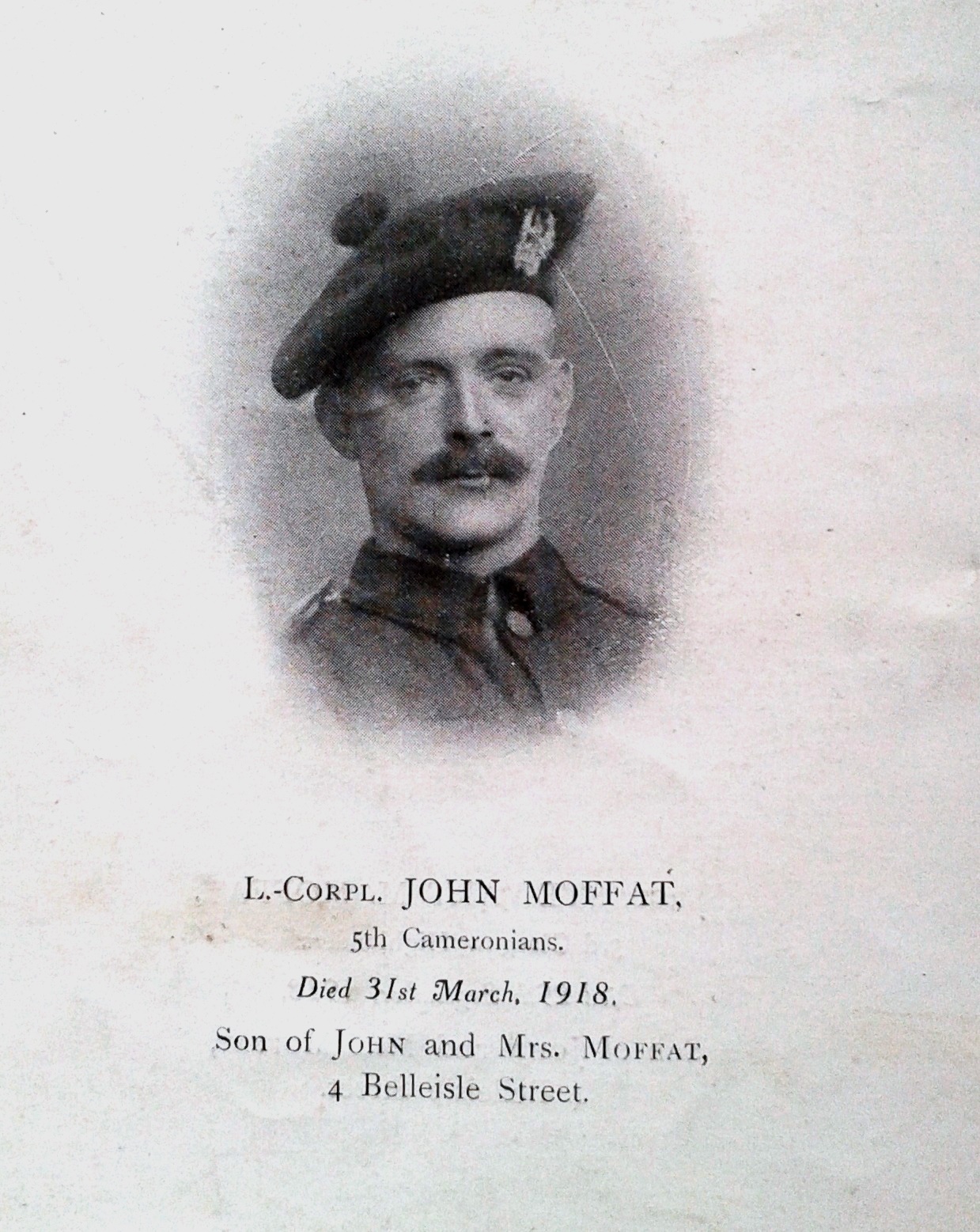 Although the defenders eventually inflicted more casualties on the attackers, many of the German wounded would return to action, whereas the many British soldiers who were surrounded and forced to surrender were an irreparable loss. The impetus of the German advance forced the surviving defenders back or cut them off. First-hand accounts tell of days of retreat in the face of persistent infantry and artillery attacks. Along the front, batteries of the Royal Field Artillery (RFA) did their best to slow the German advance and cover the retreating infantry. They suffered heavy casualties in dead, wounded and prisoners during their fighting retreat. On 31 March 1918 Gunner William Sutherland of 315th Brigade, RFA found time to describe to his father his experiences of the previous ten days of retreat from his sector of the Somme. A peacetime motorman in Aberdeen, Sutherland had previously worked as a postman at Inverbroom, on Loch Broom in north-west Scotland. He was killed in action on 4 April 1918. 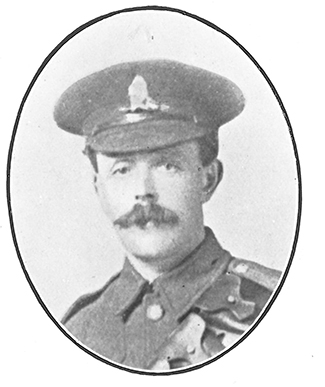 The Fifth Army was overwhelmed by these sustained attacks, forcing it back up to 12 miles in places, but it did not break. On 23 - 26 March German successes in the Somme sector continued with the capture of Peronne, Bapaume and Albert, but on 28 March a massive assault towards Vimy Ridge was stopped in its tracks. By the end of the month 20 miles of ground over a 50-mile front had been lost. The Germans were only five miles from Amiens, the Allies’ key railway centre. Rather than concentrating their assault in order to capture Amiens and create a decisive split in the British front, German efforts began to be diluted. They continued to mount attacks, but also had to defend their own flanks in the salient they had won. For the moment this enabled the British defence to absorb the enemy’s numerical superiority. Commonwealth units played a heroic part alongside the British Army.

The German strategy was to force the British back to the English Channel and by separating the British from the French, to threaten Paris. By 23 March their largest heavy gun was ranged on the capital from 60 miles away, causing widespread panic and many civilian casualties. Further enemy assaults on the French front followed, as related by a British GHQ staff officer in a letter home:

‘On the 29th and 30th he attacked the French with incredible violence and incredible losses. Certainly no democratic power would pour forth blood as he does. He must be short of food, or he would not go on in this fashion. One cannot but admire his plan as conceived. It has something Napoleonic about it. He takes risks on a huge scale. He has already attained a considerable gain in territory, but so far it is a territory of no man’s land.’

In order to recover and reorganise, the Germans called off the Michael offensive on 5 April. Their next assault, codenamed Georgette, also achieved surprise when it began on 9 April. It aimed to capture key roads and railways, and cut off the British  Second Army guarding the front south of Ypres from Armentieres to Givenchy. During the several phases of the Battles of the Lys, as it became known, the Germans recaptured territory gained at such heavy cost in 1917. 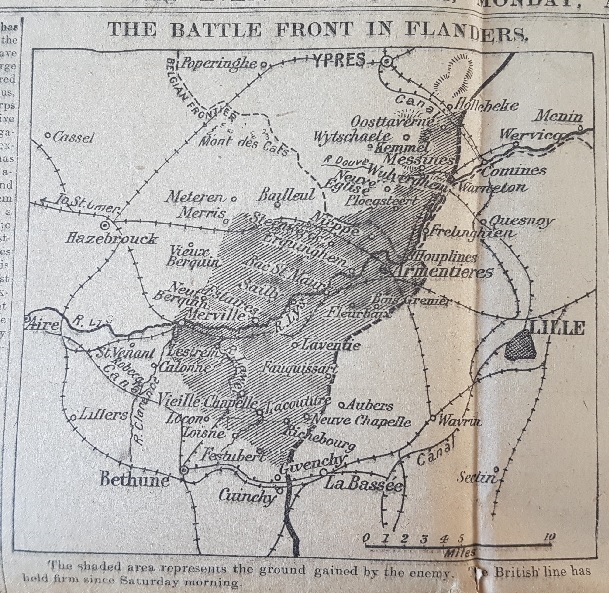 During April the situation remained grave for the Allies. On 11 April Field Marshal Haig issued his famous Order of the Day that ‘Every position must be held to the last man: there must be no retirement. With our backs to the wall and believing the justice of our cause each one of us must fight on to the end.’ The possibility of a breakthrough near Ypres meant that the British War Cabinet even considered a strategic withdrawal, opening the Channel ports to capture by the Germans. As actually happened in 1940, this would lead to the threat of a German invasion of Britain. However, in 1918 the Allies took measures to strengthen defences. General Foch’s appointment as supreme commander helped to co-ordinate French reinforcements in badly-needed places such as the Ypres sector. Reinforcements also arrived from Britain and troops in Italy and Palestine were transferred to the Western Front. 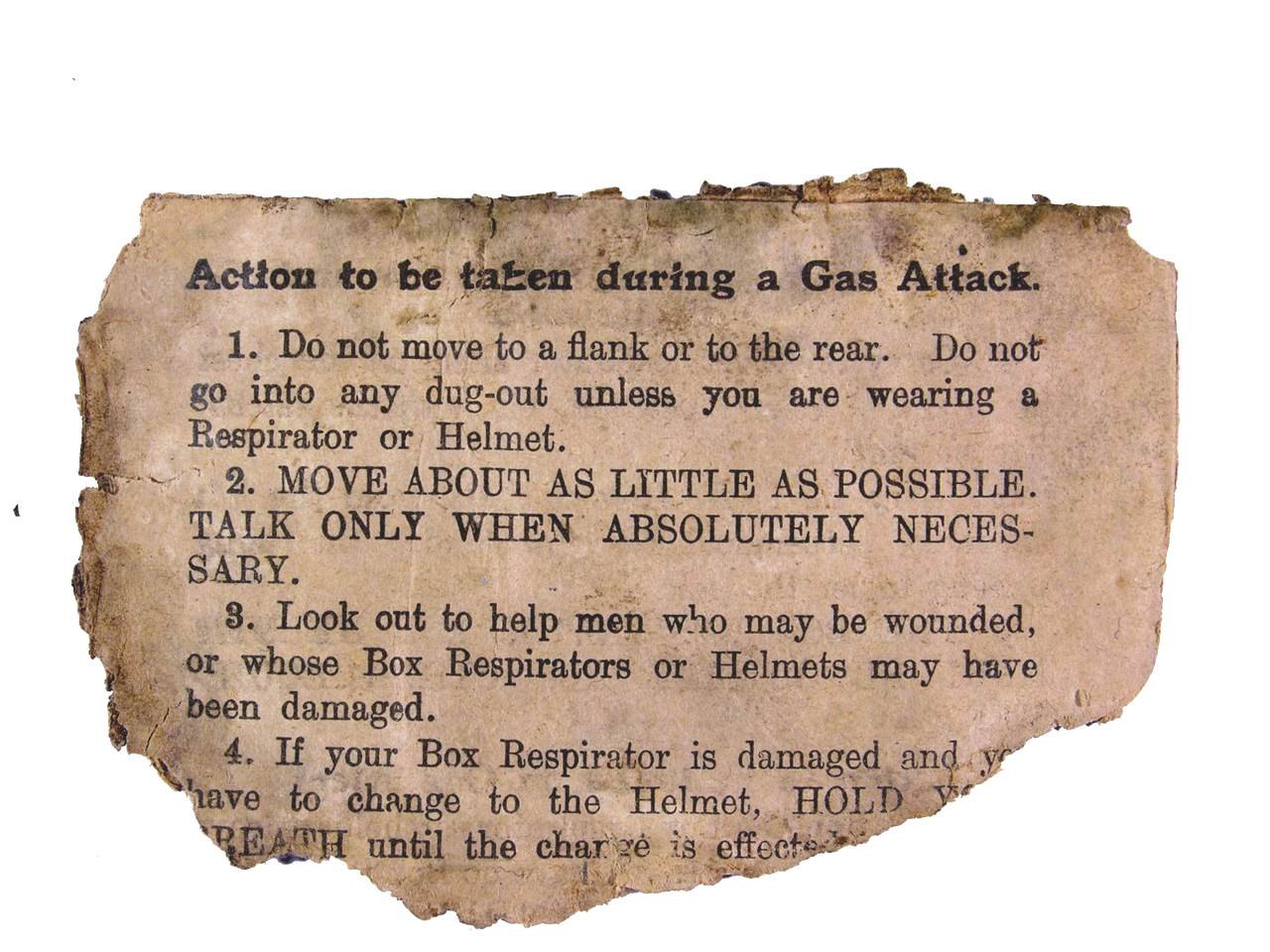 Instructions for dealing with the constant danger from German gas shells, from the pay book of Private J W Allison, killed in action, 12 April 1918.  He served in 29th Division’s Machine Gun Battalion, defending the Nieppe Forest near Armentieres. National Records of Scotland, Soldier’s Will of J W Allison, SC70/8/1248/4.

Gradually the German attacks were contained along the Allied Front. This was in part due to the exhaustion and other difficulties experienced by the attackers, but the stubborn, disciplined and valiant defence by British and Commonwealth troops, whose morale largely remained unbroken, was a key factor in bringing the ‘Kaiserschlacht’, the Kaiser’s Battle, to an end. As Haig expressed it in his Order, the outcome depended ‘upon the conduct of each one of us at this critical moment’.