To mark the conflict between 1914 and 1918 the National Records of Scotland is creating a series of online features concerning particular topics and events. From time to time we will also be organising talks and exhibitions, and releasing records to add to those we already make available online.

Battle of the Somme - More Stories

After 1 July 1916 the battle lasted on and off for 141 days, during which Scottish troops were heavily involved in the fighting, at terrible cost in deaths and injuries. We tell some of their individual stories in Battle of the Somme - More Stories.

The Battle of the Somme was a mass allied offensive of the First World War by the British and French armies against the Germans, conceived  by General Haig. We have chosen to mark the 100th anniversary of the battle by telling the stories of some of the thousands of Scots soldiers who perished on 1 July 1916, the first day of the battle, told through their wills and other records held by NRS.

At the Battle of Jutland on 31 May – 1 June 1916 two powerful British fleets left their Scottish bases to do battle with the German High Seas Fleet. Many of the warships were Clyde-built, and remarkable photographs from the Clydebank shipyard of John Brown & Co capture some of the dreadnoughts, cruisers and destroyers that fought at Jutland. The high cost in British and German lives is also explored through other records in NRS.

The death in battle of a respected scholar is commemorated by a small plaque in General Register House, Edinburgh. The modest memorial to Yule records the only known death on active service during the First World War of a member of the General Register House staff. Read more about his story in our special feature.

On the night of 2-3 April 1916 two German airships, the L14 and the L22, dropped 23 bombs on Leith and the City of Edinburgh. The events of that night are recorded in the files of the Home and Health Department.

The Kaiser's Spy in Scotland - Naval Espionage before the Great War

In 2014 a secret agent’s spy kit went on display for the first time at National Records of Scotland in an exhibition about German espionage in Scotland before the First World War. The story concerns Dr Armgaard Karl Graves, who undertook a secret mission to Scotland in 1912 under orders from Berlin to obtain vital information about the Royal Navy’s latest weaponry and strength. Graves' covert activities are revealed through his code books, secret messages and intercepted letters.

The Battle of Loos was fought from 25 September until about 16 October 1915 in an area of coalmines and mining villages near the town of Lens, north of Arras. Six British divisions attacked strong German defences in support of French offensives to the south. Half of the 72 battalions in the assault belonged to Scottish regiments.

On Sunday 1 November 1914 the entire staff of Lerwick Post Office were arrested under orders from Lieutenant-Colonel H C Evans, Officer Commanding the HM Forces in Shetland during the First World War, and detained without charge for several days.

On 25 April 1915 the first Allied troops landed at Cape Helles on the Gallipoli peninsula, but the initial assaults against the Turkish defences made little ground. Among the battalions of the British 29th Division that took heavy casualties were 1st King's Own Scottish Borderers, a regular battalion, and 1/5th Royal Scots, a Territorial unit. A week after the landing, the British force had suffered a staggering 8,500 casualties among other ranks, and about 400 officers.

At 6.45 on the morning of 22 May 1915, a troop tain carrying soldiers of the 1/7th Battalion Royal Scots crashed into a stationary local passenger train near Quintinshill Junction on the Glasgow to Carlisle railway line, near Gretna in Dumfriesshire. The deaths of 230 soldiers and civilians make Quintinshill the biggest railway disaster to have occurred in Britain.

The First World War took a devastating toll of Scots who put on uniform and served in the armed forces, and it subjected their families at home to enormous anxiety, suffering and grief. The story of one family reveals some of the individuals behind the official statistics published by the Registrar General for Scotland.

The role of the Clyde-built battle-cruiser HMS Inflexible at the Battle of the Falkland Islands 1914, the Royal Navy’s decisive victory four months after the outbreak of the First World War.

This selection of images relating to the First World War, taken from our collections of government records and private papers, to our image gallery. 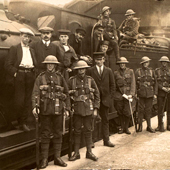 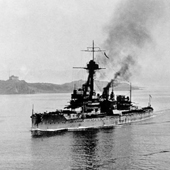 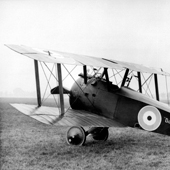