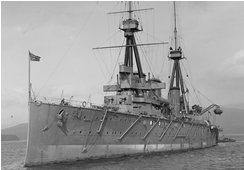 In a decisive sea battle near the Falkland Islands on 8 December 1914, the British Vice Admiral Sir Doveton Sturdee secured victory over his German adversary Admiral Graf Von Spee. It came five weeks after Von Spee had overpowered an inferior British squadron commanded by Rear Admiral Cradock off Coronel in Chile on 1 November. The Royal Navy lost two armoured cruisers and all 1,600 hands in the traumatic defeat at Coronel, causing the Admiralty immediately to move fresh ships south in order to prevent Von Spee breaking into the South Atlantic. Sturdee lay in wait for Von Spee’s cruiser squadron, which it was correctly anticipated would attempt to attack Port Stanley and Port William on East Falkland Island. 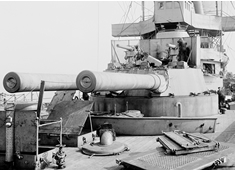 Sturdee was victorious partly because his squadron included two of the Royal Navy’s more powerful warships, HMS Inflexible, commanded by Captain R F Phillimore, and her sister ship HMS Invincible under Captain P T H Beamish, which served as Sturdee’s flagship. These battle-cruisers outperformed the German armoured cruisers in speed and armament, enabling them to catch the Gneisenau and Scharnhorst as they withdrew at speed after breaking off from their planned attack on the Falklands. After several hours’ pursuit, the British battle-cruisers sank both German cruisers, while three other German cruisers and some support vessels were sunk by other ships in Sturdee’s squadron. 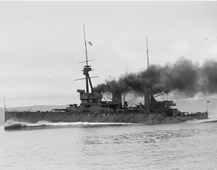 Both British battle-cruisers experienced technical difficulties arising from firing large-calibre guns while at high speed. Depending on course and wind direction, the problems included smoke from the ships’ own funnels and guns obscuring gunnery control positions on the masts. The photograph of Inflexible taken during trials on the Clyde in 1908 illustrates how funnel smoke could restrict observation. 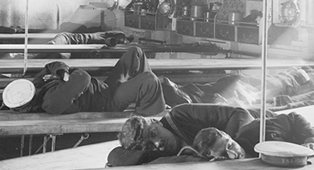 HMS Inflexible fired as many as 600 twelve inch shells during the pursuit of the Gneisenau, exhausting most of her magazine stock. Von Spee and about 1,800 of his sailors perished as result of the near total destruction of his squadron. Inflexible rescued 62 of the 190 survivors from the Gneisenau. The British acknowledged that German gunnery during the battle was generally outstanding, resulting in 22 hits on Invincible, but with no losses among her crew. HMS Inflexible was only hit three times, but two men were wounded, and one was killed: Able Seaman Neil Livingstone (Royal Fleet Reserve, B3593), born in Argyll in 1879. He was one of ten fatalities in the entire British squadron. 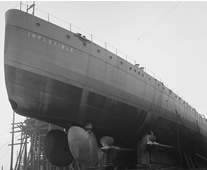 Inflexible was designed as new type of armoured cruiser, known from 1912 as the battle-cruiser. Her two sister ships Invincible and Indomitable were respectively built by Armstrong Whitworth & Co. at Elswick on the Tyne, and by Fairfield’s at Govan on the Clyde. Inflexible was laid down at John Brown & Co.’s yard at Clydebank on 5 February 1906, launched on 26 June 1907, and completed in October 1908. The shipyard’s photographers captured her construction and trials, as they did for all vessels built at Clydebank. The resulting images form part of a huge series of photographs in the Upper Clyde Shipbuilders’ records preserved in the National Records of Scotland. 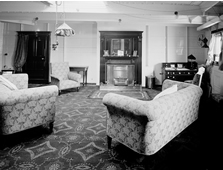