The death in battle of a respected scholar is commemorated by a small plaque in General Register House, Edinburgh.

Before the First World War Charles Whitehead Yule worked in the Historical Department of Register House as an Assistant Curator (in modern terms an archivist). He was born in 1888, the second of three children of James Yule, a builder in Kinghorn in Fife, and his wife Thomasina Whitehead. Charles lost his father at the age of two. 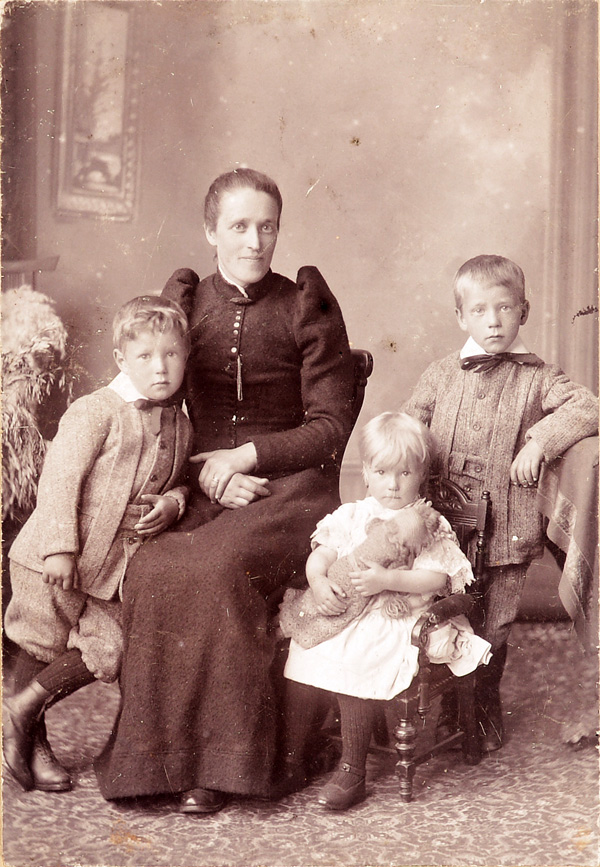 He was educated at Clifton Hall school in St Andrews and Kirkcaldy High School, before entering  St Andrews University, He gained a first class MA degree in classics in 1910, and in 1911 a first class degree in economic science. In 1912 he received a B.Litt degree.

Meanwhile, in October 1911 Lord Pentland, Secretary of State for Scotland and a progressive member of the Liberal government, arranged Yule’s appointment to the staff of Register House. As the Deputy Clerk Register there later explained, Lord Pentland appointed him, ‘his attention having been drawn to Captain Yule’s attainments and suitability for such a post by his friends in St Andrews’ (NRS, SRO22/6/30, letter of 22 May 1916).  One of those friends who influenced Yule’s appointment was almost certainly Robert Kerr Hannay, a lecturer in ancient history and political philosophy at St Andrews, whom Lord Pentland appointed Curator of the Historical Department at the same time. Hannay took up his post at Register House on 6 November 1911, a fortnight before Yule began as his Assistant on 20 November. Yule lodged at 68 Spottiswoode Street, Edinburgh, and helped support his mother in Kirkcaldy. 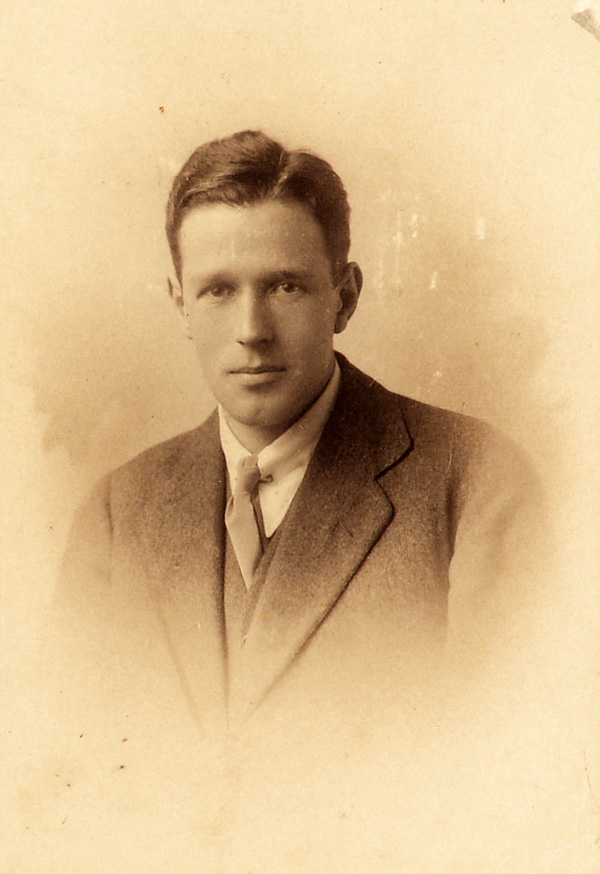 On the outbreak of war in 1914 he joined up and was attested on 29 September. He applied for a commission, and doubtless owing to his experience as a cadet in St Andrews University officer training corps he was successful. In November 1914 he ceased to be Private 17276 of the ‘Edinburgh Battalion’ of the Royal Scots. Commissioned as a second lieutenant in 13th Battalion of the same regiment, he was later promoted to first lieutenant. The battalion crossed to France in July 1915 with the 45th Brigade in 15th (Scottish) Division, part of Kitchener’s new armies. For ‘conspicuous gallantry’ at the Battle of Loos in September 1915 he was recommended for, but not awarded, the Military Cross. He was however promoted to the rank of temporary Captain on 4 October. 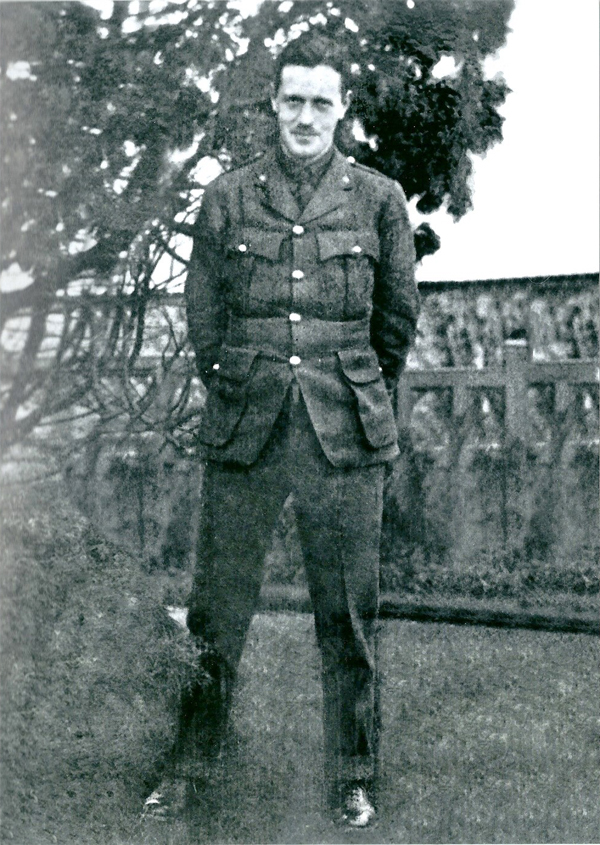 In May 1916 the battalion was in the line at Vermelles, north of Loos and opposite the German-held Hohenzollern Redoubt. On 11 May, during a massive German artillery bombardment a shell landed on a dugout and exploded inside, killing or wounding all the battalion headquarters staff. Yule was one of five officers killed outright. A heavy infantry assault followed, and by nightfall the battalion had suffered casualties of thirteen officers and 226 other ranks killed or wounded. Yule was one of seven officers killed in action that day. He was 27 years old and unmarried. 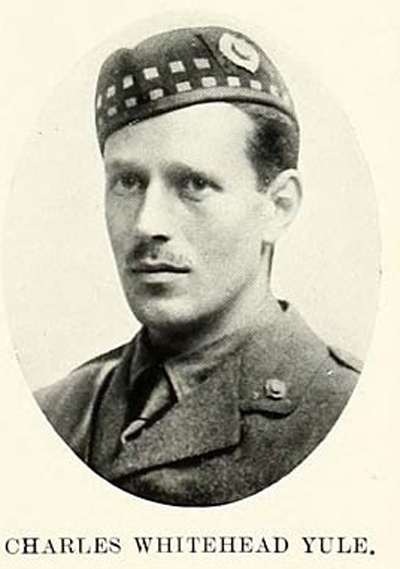 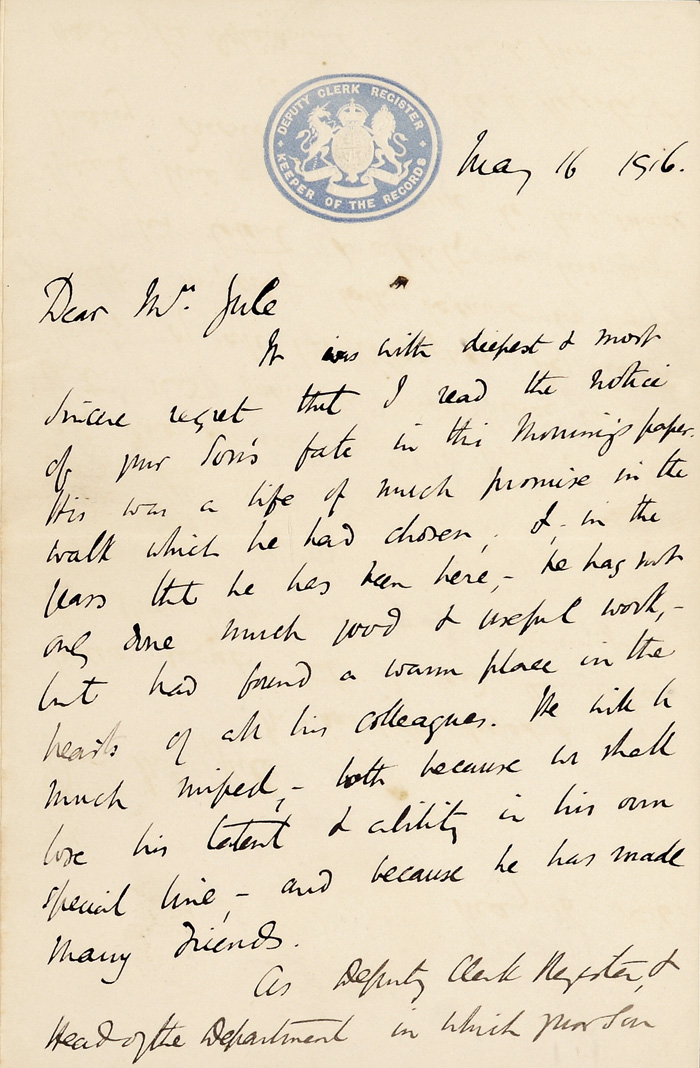 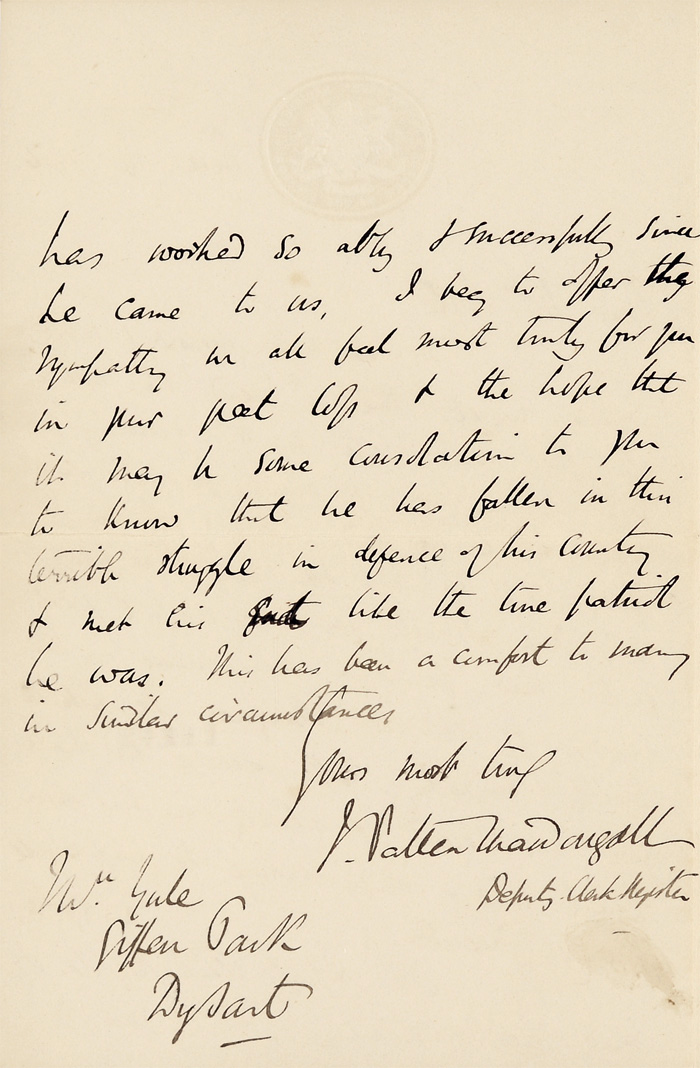 His grieving mother had the consolation of a kind letter from the department head, Sir James Patten MacDougall, which spoke of his ‘talent and ability in his chosen line’ and the friendships he had formed with his colleagues.

In an official letter MacDougall described how Yule ‘made for himself a number of friends here, was extremely popular and did excellent work in the Historical Department, where his services will be much missed. He had been twice home since he went to the front, and his letters, which I sometimes saw, were extremely interesting and instructive. His loss is much regretted by everyone.’ He also hinted that as Yule had poor prospects of promotion he was known to have been ‘on the lookout for a new sphere of activity where he would have had greater opportunity of exercising his special attainments.’ (NRS, SRO22/6/30, letter of 22 May 1916) 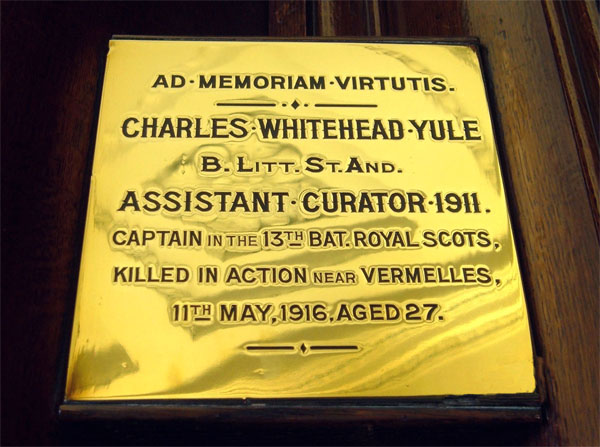 Yule was buried with many comrades in Vermelles British Cemetery. He was commemorated by a plaque (measuring only 17 x 14 cms) in the old catalogue room of Register House. As this room is adjacent to the Historical Search Room, it was perhaps where Yule worked, ready to assist researchers who were consulting the records. The Latin inscription ‘ad memoriam virtutis’ can be translated as ‘in commemoration of worth’, a fitting phrase for a classical scholar who enjoyed the respect and affection of his colleagues.

In 1907 Yule made his widowed mother Thomasina the sole beneficiary of his estate, which in 1916 amounted to £625. 6s. 7d, one third consisting of back pay and his officer’s account, and the rest two life insurance policies (according to his will and inventory of estate in ScotlandsPeople). His mother was to receive £80 pension annually. She died in Edinburgh in 1924, survived by her married daughter Jean (Jane), her elder son Peter having died at sea in 1904.

The modest plaque commemorating Yule is the only such memorial in the Register Houses. An online Roll of Honour now contains his name and those of dozens of his colleagues who either lost their lives during the First World War, or served and survived.

Further sources: The wills and testaments of Scottish officers and other ranks can be searched online in ScotlandsPeople. Records relating to Register House are in National Records of Scotland, ref SRO6. Yule’s Officer’s Service Record is in The National Archives at Kew (TNA), ref WO339/1113, and the War Diary of 13th Battalion Royal Scots, TNA ref WO95/1946.