In 2004 Nigel Quashie of Portsmouth FC made his first appearance for Scotland in a match against Estonia. Quashie’s debut was the first time a black player had been selected to play for Scotland in over 120 years and he was only the second overall. The story of Andrew Watson, the first black footballer, has often been overlooked in the story of the Scottish game. However, using the archives in the National Records of Scotland (NRS), it is possible to re-trace the life of this sporting pioneer.

140 years ago, the name Andrew Watson would be a familiar and revered one for all Scottish football fans. Watson was one of the best known and most influential footballers of his day, captaining Scotland and leading his team to monumental victories over England and Wales. Andrew was also player and secretary of the biggest club in Britain, Queen’s Park, a team that achieved two Scottish Cup wins. More importantly, Watson is also believed to be the first black footballer to play in the Football League and the first player of colour to play in an English Cup match. To celebrate Black History Month we looked into Watson’s fascinating life story to find out more.

Andrew had been born in Georgetown, Demerara, the capital of British Guyana to a wealthy Scottish sugar plantation owner, Peter Miller Watson, and a local black Guyanese woman called Hannah Rose. He also had an older sister called Annetta. Peter Watson was born at Kiltearn, near Dingwall in 1805 to James Watson, a factor for Lord Dundas in Orkney and his wife Christian Robertson of Kiltearn. At the age of 5 or 6, Andrew Watson, along with his sister Annetta, accompanied their father on a voyage across the Atlantic Ocean for a new life in Britain, leaving their mother behind in Guyana.

After arriving in Britain, Andrew Watson benefitted from the English public school system. At the time of the 1861 Census, Andrew was 4 years old and attending a school in Staffordshire (image below) followed by schools in Yorkshire and Wimbledon. Whilst Andrew’s father clearly had the means and desire to offer his children an expensive education, Andrew’s status as the offspring of an unmarried black mother and a white father was problematic and Andrew was presented to the schools he attended as an orphan. The timing of the move was significant; the importance of team sports was being acknowledged by leading English schools and none were more popular that the emerging sport of Association Football. It is likely that a young Andrew was first exposed to football during his education.

In 1869, Watson’s father died, leaving an estate worth in excess of £35,000 (in today’s money this equates to more than £2 million pounds) shared between Watson, then aged 13, and his sister Annetta (a small amount was also left to their mother in Guyana). Due to his father’s death, Watson became financially independent for life and was able to devote a significant amount of time to football, an advantageous situation given that Scottish football was wholly amateur until 1893.

At the age of 19, Watson enrolled at the University of Glasgow to study engineering, natural philosophy and mathematics. Thanks to his inheritance, he could afford to be taught by the best academics the institution had to offer, including Lord Kelvin. However, Watson did not complete his studies, and by 1877, as a man of independent means he set up a wholesale warehouse business Watson, Miller & Baird in Glasgow. In November that same year, his business partner, William Govan Miller was a witness at his marriage to Jessie Nimmo Armour of Govan.

This certificate records Watson’s profession as ‘apprentice mechanical engineer’, a line of work he pursued throughout his life alongside football. He went on to specialise in marine engineering, and was employed as a crew member of various ships crossing the Atlantic between British ports and North America.

In 1878, a son, Rupert Andrew Watson was born and in 1880 a daughter, Agnes Maud followed. The young family are enumerated in the 1881 census, at 15 Afton Crescent, Govan, with Andrew Watson, head of the household noted as having an occupation of ‘Warehouseman (Dry goods)’. Watson also appears in the Valuation Rolls for Govan as tenant of Afton Crescent.

From the mid-1870s onwards, Watson combined his dry goods business with a glittering football career. In 1874 he signed for the Glasgow-based Maxwell before moving to the Govan-based Parkgrove FC where he was also match secretary. Watson acquired a reputation as one of the most stylish, pacey and composed full backs in the Scottish game. Watson was not only the first person of colour to play football in Britain, but also to hold an administrative role within a British team. Watson’s position as a local business owner and a gentleman enabled him to hold the responsible and prestigious position of match secretary within the team. 1880 saw Watson invited to join the leading Scottish club of the era Queen’s Park, where he also fulfilled the role of match secretary. Not only were Queen’s Park one of the most successful clubs, they also had a reputation as being the club of choice for the social elite. That Watson held the position of secretary is a strong indicator of his social status in Scottish society.

His success in these international matches brought Watson to the attention of leading figures in English football and a move to English football followed, initially with the Slough-based Swifts FC. Among Watson’s many admirers was Nicholas Lane Jackson, committee member of the Football Association and founding member of the Lawn Tennis Association. Jackson went on to form the prestigious amateur Corinthian FC, whose short passing games and organised interplay had been modelled on Watson’s Scotland team. Watson himself would later turn out for the Corinthians alongside his playing duties for Swifts. It is striking that Watson appears to have moved within the highest echelons of the footballing establishment in both England and Scotland, playing and serving in administrative roles at some of the most prestigious amateur clubs both North and South of the border. It is noteworthy that Watson’s ethnicity never featured in match reports and there is no evidence of him being subject to racial discrimination from crowds. It would appear that Watson’s public school education, wealth and status as the son of a gentleman seemed to have protected him from the racist attitudes of later nineteenth century society.

Despite his successes in London, his home life would be marked by tragedy. Andrew’s wife Jessie, died late in 1882, prompting a return to Glasgow along with his two young children. Andrew and Jessie’s children were cared for by his wife’s family and over the next few years, Andrew divided his time between Glasgow and London, playing for Queen’s Park, Swifts and touring with the Corinthians. As he no longer resided full time in Scotland, he was not eligible to play for the international side again, curtailing what would have likely been a lengthy and successful international career. Nevertheless, Andrew Watson won further Scottish cups with Queen’s Park in 1886 and 1887. In 1887, Watson also remarried. Five years after the death of his first wife, Watson married Hampshire-born Eliza Kate Tyler in 1887 in Glasgow. Watson’s sister, Annetta was a witness at the ceremony in Florence Street.

After his second marriage, Watson moved to Liverpool and went on to play for Bootle FC. Bootle paid wages to some of their players and whilst there is no evidence that Watson received financial compensation from the team, it is possible that he may have been the world’s first Black professional footballer. In Liverpool, the couple had a son, Henry, in 1888, and a daughter, Phyllis in 1891. The port became a useful base for his career in maritime engineering; he is listed as a crew member on many ships leaving Liverpool to the Americas and became a qualified maritime engineer. In retirement, Watson returned to London, dying at 88 Forest Road, Kew in 1921 at the age 64, with his death going largely unnoticed by the football world.

Watson’s pioneering career was overlooked for many years, and how he spent his later years has only recently come to light. Thanks to diligent research work in archives across the country, such as the NRS, it has been possible to appreciate the nature and scale of his contribution to the sport and tell his life story. There is much more to discover about this remarkable man, who in the 1880s achieved so much, including being the first black captain of an international team, the first player of colour to win a major footballing competition and the first black player to appear in the English FA Cup. The list of footballing ‘firsts’ makes Andrew Watson one of the most significant figures, not only in the Scottish game, but in world football. A status that was acknowledged by the Scottish Football Association when they inducted him into the Scottish Football Hall of Fame in 2012. 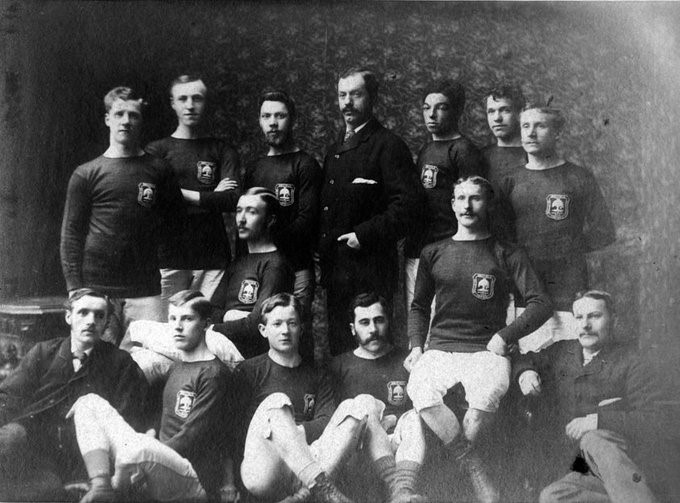