6 September 2015 marked the opening of the new Borders Railway. Running between Edinburgh Waverley and Tweedbank, the line will once again connect the Scottish Borders by rail with the nation's capital city for the first time since the Waverley Line (which ran from Edinburgh, through the Borders, to Carlisle) closed in 1969.

The National Records of Scotland holds a substantial collection of railway plans within the archives, including many covering the route of the old Waverley Line. These range from architectural drawings of many of the stations, to engineering drawings of the various bridges and other structures along the route. 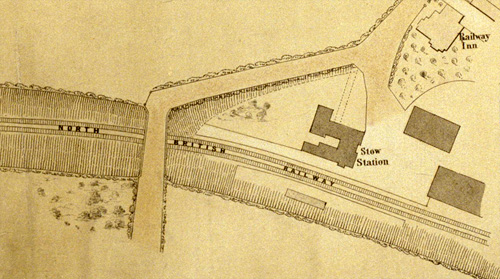 Plan of the village of Stow, Midlothian, 1862,
National Records of Scotland RHP23083 (detail)

Our collections are wide-ranging and, while many of these records are from the collections of the former railway companies who operated across the length and breadth of Britain, others can be found within the records of the Scottish courts, government departments, and family or business collections.

These fascinating drawings and plans give a unique insight into the history of the country's railways. Find out more about these collections from our research guides on railway records and maps and plans.