In 2020, the Scottish Government is celebrating the Year of Coasts and Waters. In this article we delve into our archives to learn more about coastal defences, in the form of Martello towers.

Martello towers were built by the British Government across its empire to guard against the threat of foreign invasion, with a spate of building taking place during the American War of Independence (1775-1783) and the Napoleonic Wars (1787-1815). More than 100 of these distinctive rotund towers were built along the south coast of England, however, only three of these structures were built in Scotland and all three remain standing today. These are registered as Scheduled Monuments by Historic Environment Scotland.

It is thought that these structures were inspired by the imposing defensive towers built along the Corsican coast. Bells within the towers were rung with ‘martellos’ or hammers to warn of threats, and it is thought that this is where their name is derived from.  The towers erected in Britain were masonry structures, round in shape, with walls that gradually sloped towards the top of a flat roof and were usually around 12 metres (around 40 foot) in height. These characteristics provided strength to withhold bombardment from artillery and canon fire from nearby vessels at sea.

Three Martello towers were built in Scotland; one located in Leith (built 1808) and the other two overlooking Longhope Sound in Orkney (built between 1810-1815). In 1807, an agreement was undertaken by the City of Edinburgh and the Board of Ordinance to erect military works, including the building of a Martello tower in defence of the port of Leith. 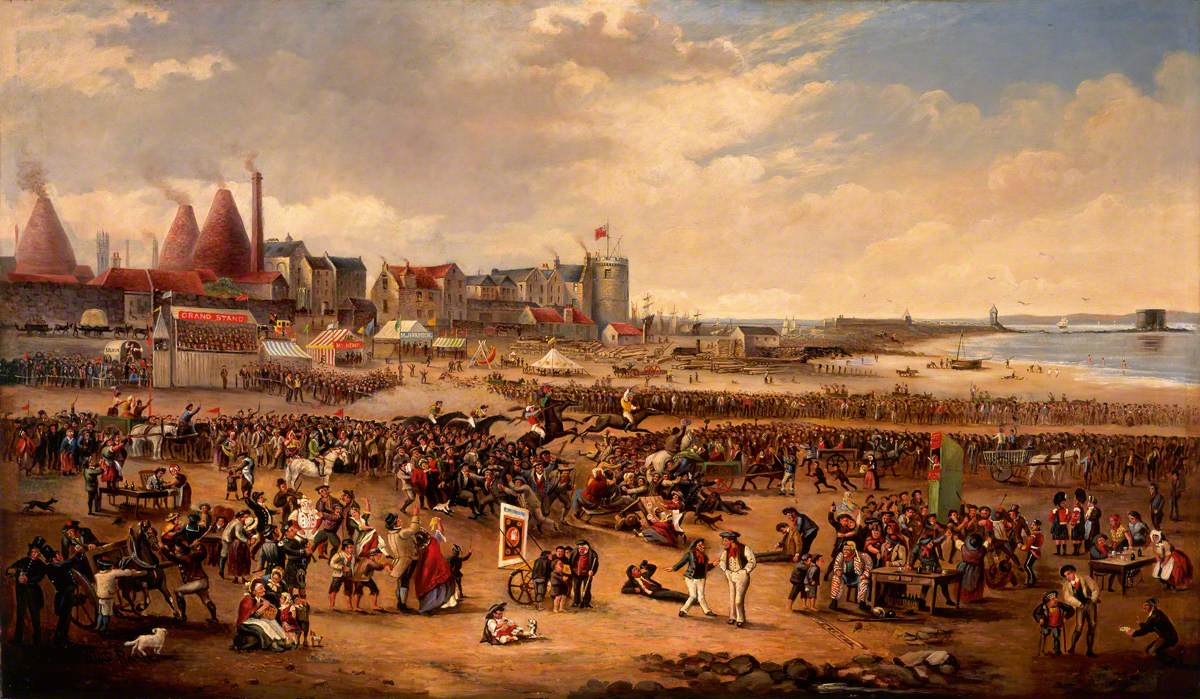 The Tally Tor can be seen on the far rigtht of this painting entitled Leith Races by William Thomas Reed (1845-1881)
Photo credit: Museums & Galleries Edinburgh – City of Edinburgh Council

The ‘Tally Tor’ as it became known locally, was built on an outcrop of rocks, known as Beacon Rocks, an subsequently, Martello Rocks on the East Breakwater at Leith. This area is now reclaimed land, and forms part of Leith dockyards. This location provided additional security, as the tide went out, the raised entrance of the tower made access difficult. The ‘Tally Tor’, together with Leith Fort (built 1780), meant invasion of the Scottish capital by sea was a hazardous undertaking. The fear of invasion by sea was not unfounded, the sighting of American privateers led by the Scottish buccaneer John Paul Jones  in the Firth of Forth, in 1779, caused  concern and may have led to the strengthening of Leith’s defences. 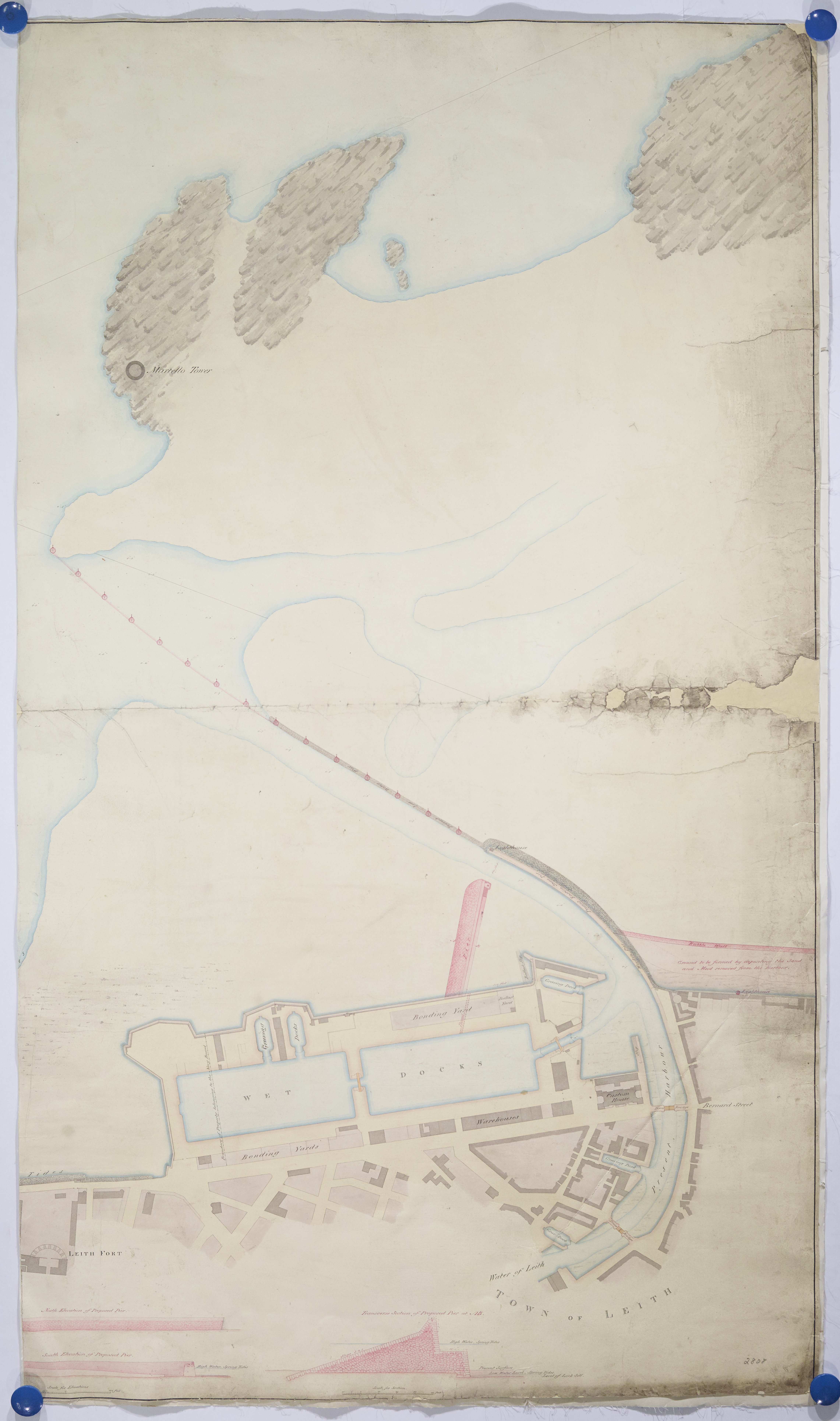 Plan of the harbour of Leith "in its present state showing the proposed pier and other improvements": 1828. The round structure of the tower situated on the rocks is seen in the top half of the plan. Crown copyright. National Records of Scotland, RHP2808

The Leith tower had a gun platform of 9.75 metres (32 feet) in diameter, ‘calculated for two twenty-four pounders’. Despite costing £10,000, it appears that the tower was left unoccupied and defenceless until 1858, when three thirty-two pounder guns were sent from the Woolwich Arsenal and located at the fort. This sudden armoury may be linked to the building of Palmerston Forts, which were constructed in the mid eighteenth century to defend British ports against an expanding French Navy.

The Longhope towers in Orkney are described by the Preservation of Ancient Monuments Board of Scotland (PAMBS) as being of a more ‘advanced type’ than their Leith counterpart. These two towers were built leading up to the Declaration of War by Britain’s North American colonies in 1812. The forts, located on either side of the sound at Harkness and Crockness, were constructed to command the approaches to Longhope and so to protect British convoys sheltering there from French and American privateers. A battery built in the mid-19th century to the west of Harkness tower strengthened the bay further. 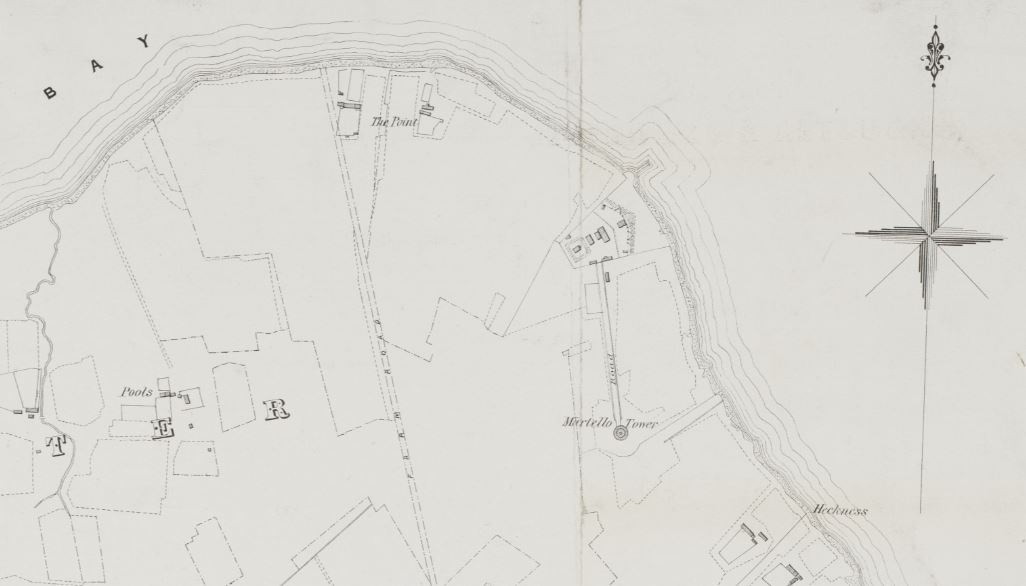 Plan of the Crown Lands in the parish of Walls, Orkney. Plan No 2 Kirbuster and Osmondwall'. Unattributed. Lithographed by D and D Nimmo, Edinburgh. 1870 (detail showing location of Hackness Martello tower and battery). Crown copyright. National Records of Scotland, RHP1703

The configuration of the towers as detailed in the PAMBS report provides an insight into the conditions experienced by the soldiers garrisoned there. The Harkness and Crockness towers were built to the same plan, being 12 metres by 9 metres (40 feet by 36 feet) and oval-shaped. The internal space was circular in design and split across two floors with the stair built within the thickest part of the wall.

The first floor had a domed roof which contained the living quarters. It was divided by a light timber frame partition into a large barrack room with two windows and a fireplace and a small segment-shaped room for the officer in command. Sleeping accommodation consisted of nine folding beds attached to the wall in the barrack room.

The ground floor was divided by stone walls into four barrel vaulted compartments and entered by a stair from the upper floor. Live ammunition was stored in one of these ventilated compartments. The plan reveals that this stock of artillery was located perilously close to the kitchen and provision room in the tower.

The gun platform was located on the roof and the Orkney towers were equipped with a single gun on a traversing platform, running on iron rails. The rails were screwed down to granite blocks and allowed for 360-degree rotation. A crane set in a chase in the upper part of the wall above the door was used to haul materials up to the platform. 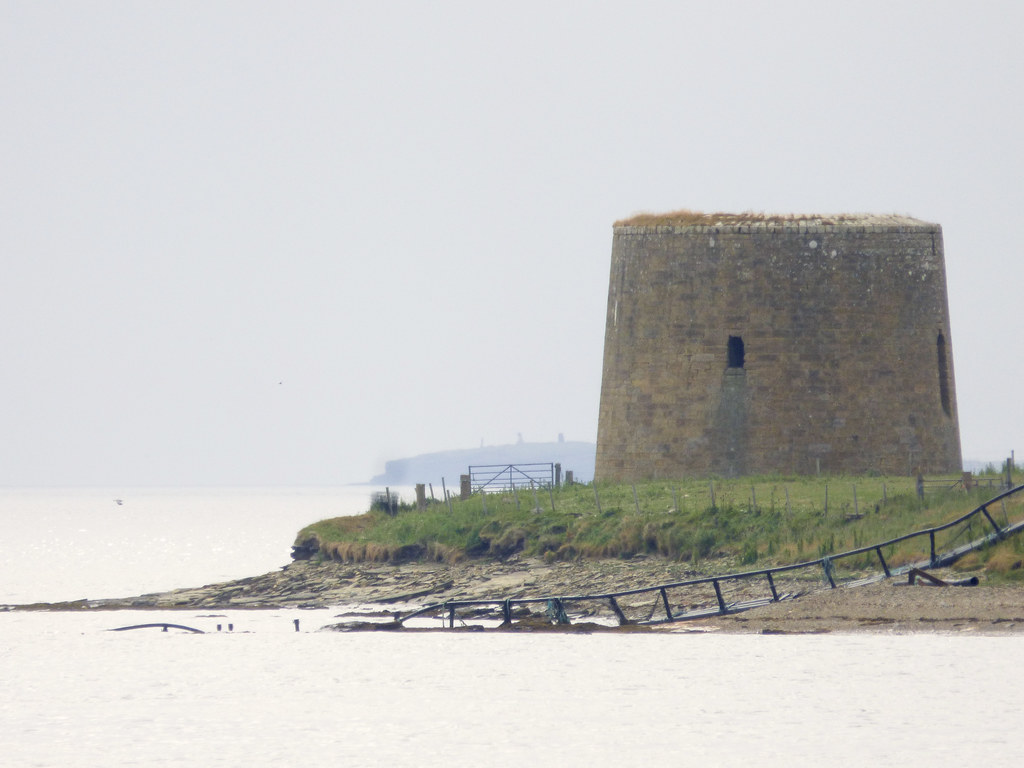 During the Second World War, some of the towers along the south coast of England were used again as military forts, serving as observation posts and in some cases were equipped with anti-aircraft artillery. In more recent times, several of the towers became private residences and commercial enterprises. Sadly, many have been left derelict; a fate suffered by Leith’s Martello tower, although the remains can be viewed from the pier of the Western harbour lighthouse. Of the Orkney towers, the Crockness tower appears to be in better condition than its counterpart in Leith, but is similarly inaccessible to the public. After military service the Hackness tower was used as a croft. Today, it is under the management of Historic Environment Scotland, and operates as a visitor attraction, providing a fascinating insight into this important, yet overlooked chapter in Scotland’s costal history.