In recent years, The ‘International Lesbian, Gay, Bisexual, Trans and Intersex Association’ (ILGA) have consistently ranked Scotland as one of the most progressive countries in Europe in relation to LGBTI+ rights. The ILGA’s ‘Rainbow Europe Index’ measures progress in European countries on LGBTI+ equality against a 48-point criteria that includes legal protections from discrimination in employment and services, measures to tackle hate crime, rights and recognition for transgender and intersex people, and equality in family law including same-sex marriage and parenting rights. Scotland topped the index in 2015 and has been at or near the top of the list ever since.

Sadly, this was not always the case. 2020 marks the 20th anniversary of the repeal of one of the most controversial pieces of legislation to impact on Scotland’s LGBTI+ communities: Section 28 of the Local Government Act 1988.

Section 28: a backwards step for inclusivity and acceptance

Introduced by Margaret Thatcher’s Conservative government, the Local Government Act 1988, Section 28 stated that local authorities shall not “intentionally promote homosexuality or publish with the intention of promoting homosexuality”. It also prohibited the “acceptability of homosexuality as a pretended family”. This meant teachers could not discuss same-sex relationships in class, and the promotion of homosexual relationships were banned in local authority publications. This legislation contributed to the young LGBTI+ people of the day feeling marginalised and ashamed.

Despite this legislation, the Scottish LGBTI+ community grew, and support groups and networks across the country made their case for acceptance and inclusivity. Section 28 was resisted by campaigning groups across Scotland, including the Scottish Minorities Group (SMG), the archives for which now reside in National Records of Scotland (NRS). Founded by Ian Dunn in 1969 in Glasgow, the group offered support and social events to the gay community. In the following decade the SMG expanded with branches throughout Scotland.

In Scotland, Section 28 was repealed in full with the enactment of the Ethical Standards in Public Life etc. (Scotland) Act 2000, held by the NRS. Its Westminster counterpart followed three years later, with the introduction of the Local Government Act 2003.

Without the pressure on the Westminster Government from activist groups like the SMG, it is unlikely that Section 28 would have been repealed. The SMG’s work went far beyond its opposition to Section 28, it tirelessly campaigned for gay rights, with methods such as writing to influential Scots asking for their support of petitions such as a drive for a Charter Towards Homosexual Rights. 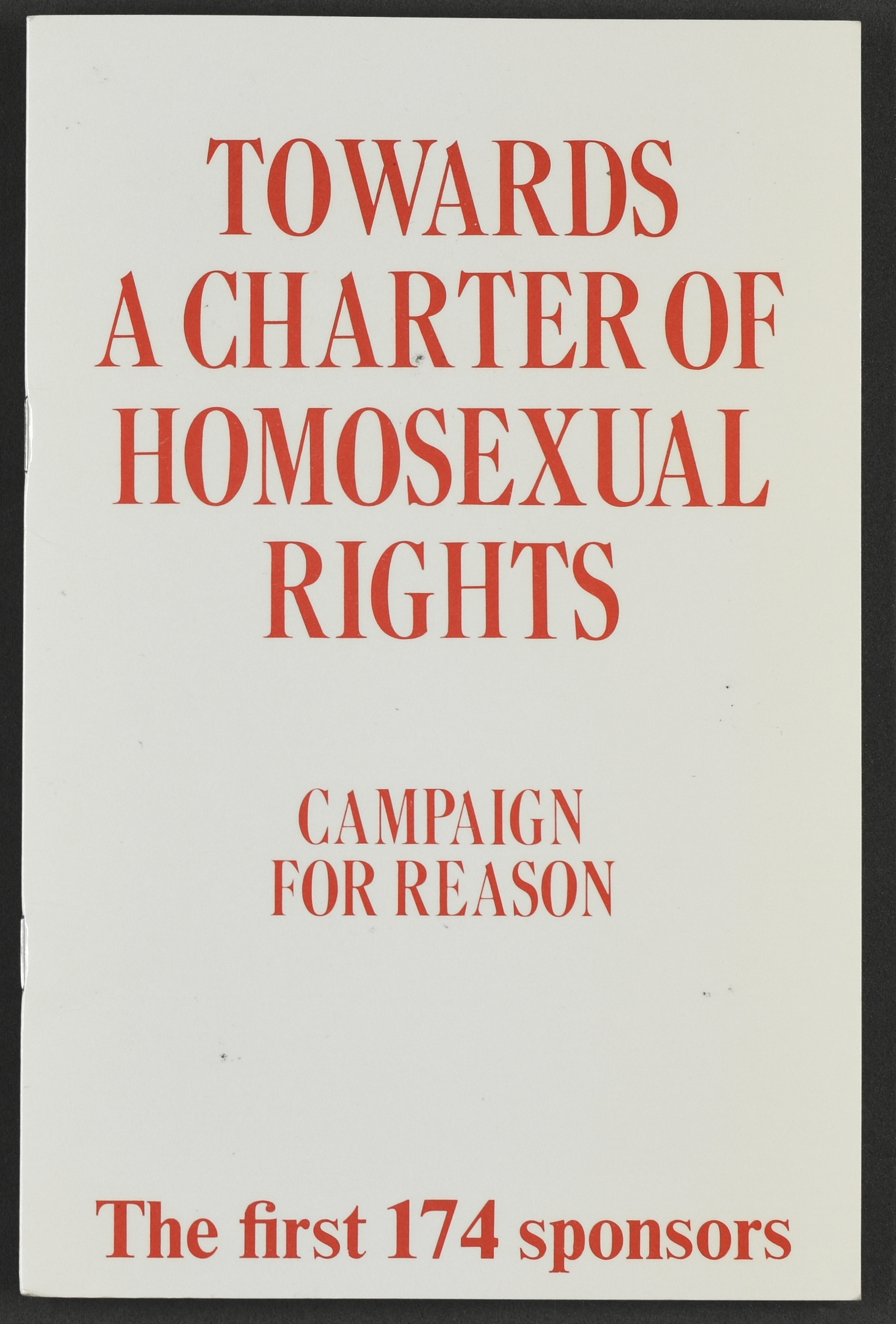 These two images depict the ‘Towards a Charter of Homosexual Rights: Campaign for Reason’, front cover and sponsor pages of pamphlet, from the Outright Scotland archives (NRS, GD467/1/1/29).

The Scottish Minorities Group developed to become the Scottish Homosexual Rights Group (SHRG) and a final incarnation as Outright Scotland in 1992. The group was involved with the development of the Glasgow Gay Advisory Service providing a telephone helpline for the community and large scale events such as Lark in the Park. The first Lark in the Park was hosted by Scottish Homosexual Action Group (SHAG), on 28 May 1988 in Edinburgh’s Princes Street gardens and comprised of music, comedy and other artistic performances. Lark in the Park was held just four days after the introduction of Section 28. At the time, it was the largest organised gay rights event to take place in Scotland. Lark in the Park was the precursor to the modern-day LGBT Pride Scotia, which grew significantly in size over the last decade, the first pride march taking place in 1995. 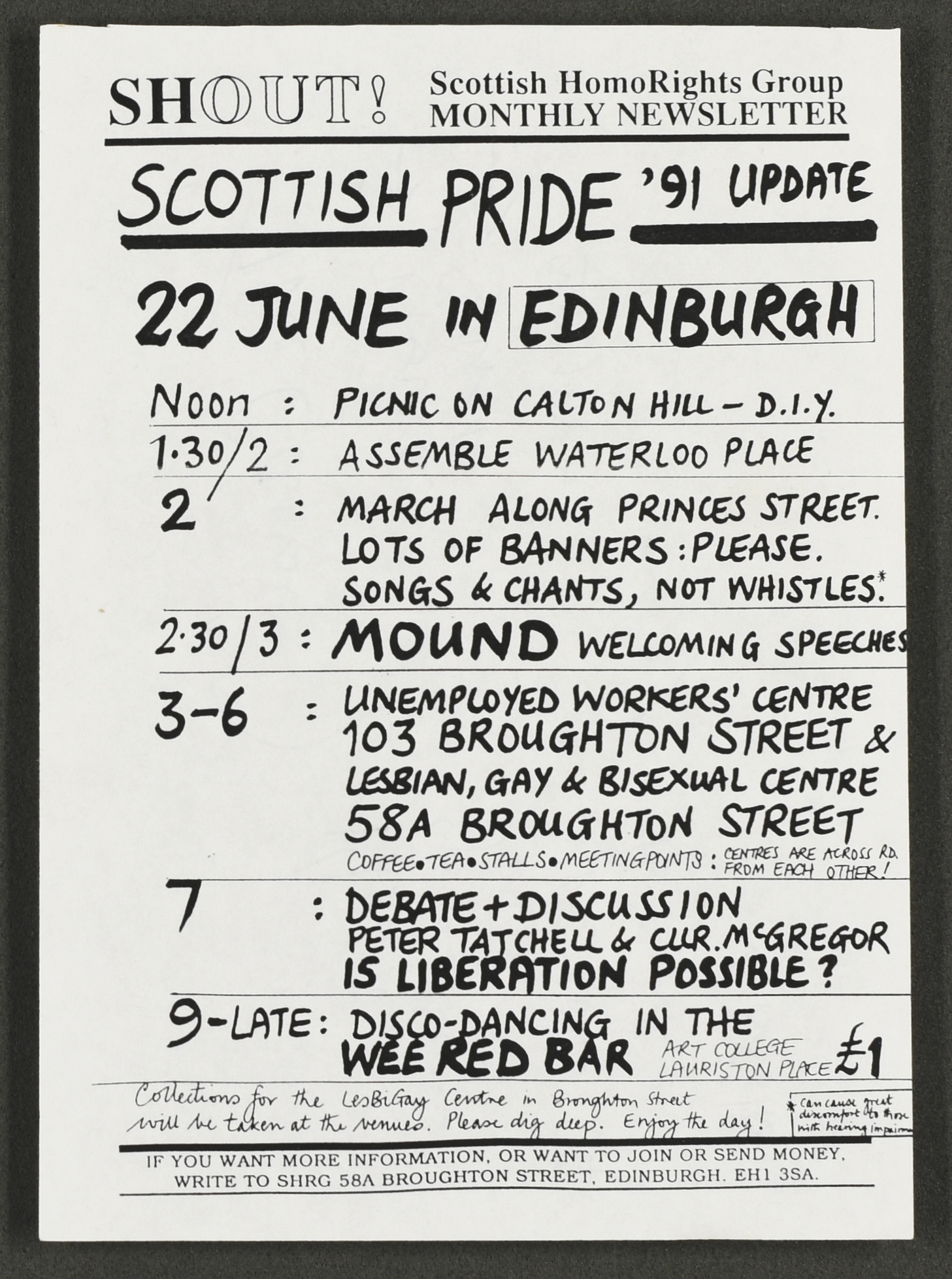 Shout Newsletter flyer detailing Scottish Pride 1991 schedule, on the back Ian Dunn (founder of the SMG) has written ‘Please give these out at MADISONS tonight, XXXX, Ian’ (NRS, GD467/1/4/7).

The 2000 pride festival, held in September in Glasgow, celebrated the withdrawal of Section 28. That year the Ian Dunn Memorial Award (founded in 1998) was awarded to the ‘Scrap the Section Campaign’.

The NRS provides a rich source of archival material for those interested in the histories of Scotland’s LGBTI+ communities. Given the social stigma and legal status of same-sex relations, it is perhaps unsurprising that many voices have been silenced. In many cases, LGBTI+ voices only emerge through court testimony. Consenting sex between men over the age of 21 was only decriminalised in Scotland in 1981. The following case, drawn from the High Court of Justiciary records of Inverness is typical of those heard throughout courts in Scotland for much of the twentieth century. Frank Lightfoot, a Royal Marine and William Thomson, a Merchant Seaman, were both charged with Sodomy in 1919.

The two men were charged after being found having consensual sexual intercourse in a park in the town of Invergordon in Ross and Cromarty. Lightfoot and Thomson were both on shore leave and were discovered together by a Police Constable on a dark September evening. Lightfoot was detained, while Thomson grabbed his recently purchased melodeon (musical instrument similar to an accordion, but with buttons rather than a keyboard) and escaped, but was captured later – the melodeon under his arm making him easily identifiable. Thomson appeared to be ‘quite sober’ and was considered by a fellow Merchant Sailor to ‘be a respectable man’. This type of activity appears to be common in the town, as a Memorandum supplied to the court by the local Procurator Fiscal states below.

Memorandum written by local Procurator Fiscal to the presiding judge during the Lightfoot and Thomson trial, 1919 (NRS, AD15/19/24).

No doubt, the Procurator Fiscal was hoping these two naval men would be made an example of with a heavy sentence in order to deter similar activity in the town. Lightfoot was sentenced to three  months imprisonment and Thomson acquitted. 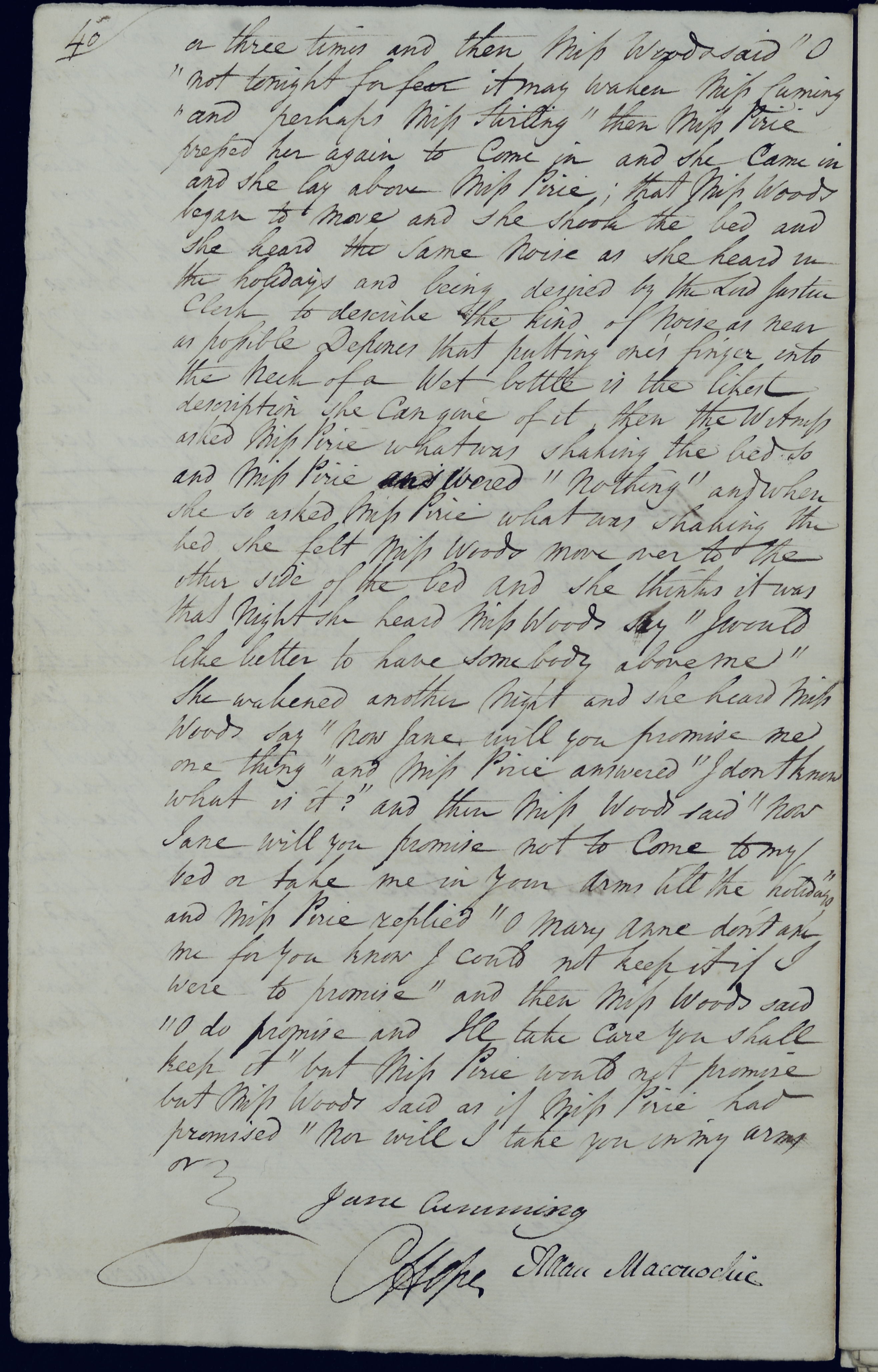 As these rumours circulated, the number of students enrolled at the school dramatically dropped, and the two destitute women were forced to lodge an action of damages against their accuser’s grandmother. The presiding judge’s discourse not only spoke of ignorance around same-sex relationships, but exhibited considerable racial bias. Jane Cumming was of mixed-race and had spent her early life in India. The judge often referred to Jane as ‘the Indian girl’ and that Jane must have become aware of lesbian practices in her own ‘hot Eastern clime’. The judge also declared that ‘no such case was ever known in Scotland, or in Britain’ and that the ‘crime here alleged has no existence’. Despite the pursuers denying the allegations, it is telling of the opinions on homosexuality and racism of the day.

Recent legislative changes have reflected modern societies’ position on gay rights. The introduction of the Historical Sexual Offences (Pardons and Disregards)(Scotland) Act 2019 enabled men convicted of now obsolete sexual offences to request these to be removed from their criminal record. Other significant changes in law which effect LGBTI+ population are the Civil Partnership Act 2004, followed by the Marriage and Civil Partnership (Scotland) Act 2014. This indicates that gay rights have come a long way in the twenty years since the withdrawal of Section 28. These changes in legislation are indebted to the hard work and activism of the LGBTI+ alliances, past and present.