Old Tom Morris (1821-1908) and his eldest son, Tommy or Young Tom (1851-1875) were outstanding golfers and celebrated sportsmen in nineteenth century Scotland. In 1875, Tom Morris was at the top of his game - an outstanding golfer and a sought-after maker of golf clubs and balls with a prosperous family business in St Andrews. Young Tom was an even more talented golfer and had already embarked on a successful professional career. The family could not have known of the personal tragedies that would soon follow. 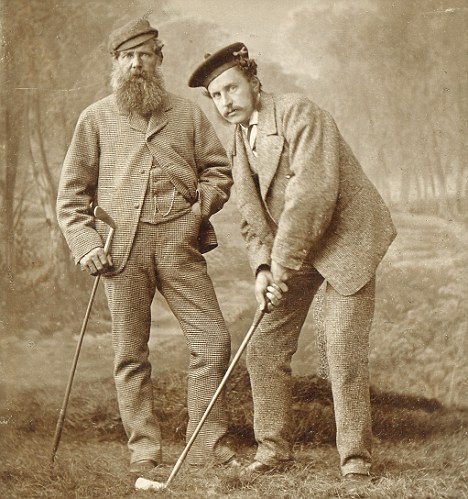 Old Tom Morris was born in 1821, the second son of John Morris, a postman and his wife Jean Bruce. Born and bred in St Andrews, Tom opted to become apprentice to local club maker Allan Robertson, instead of becoming a general carpenter. He also caddied and played golf, partnering Robertson in exhibition matches. In 1844, Tom married Agnes (Nancy) Bayne, a servant in the household of Bryan Broughton, a wealthy East India sea captain and golfing friend of Morris. In 1851, they moved to Prestwick, Ayrshire, where Tom earned his living as keeper of the golf links, maker of golf clubs and winner of golfing wagers and prizes. The couple had four children - young Tom (b 1851), Elizabeth (b1852), James (b c1856) and John (b 1859).

From its inception in 1860, Tom competed annually in the Scottish Open Golf Championship, winning the title four times (1861, 1862, 1864 and 1866). In 1863 he brought the family back to St Andrews, became greenkeeper of the Royal and Ancient Golf Club and established his club making business and shop in the town. The sporting life, including daily swims in the sea, saw Old Tom live into his eighties, having become the wise old man of golf and a popular draw to the town. 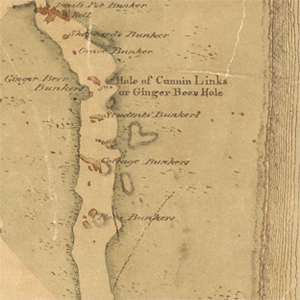 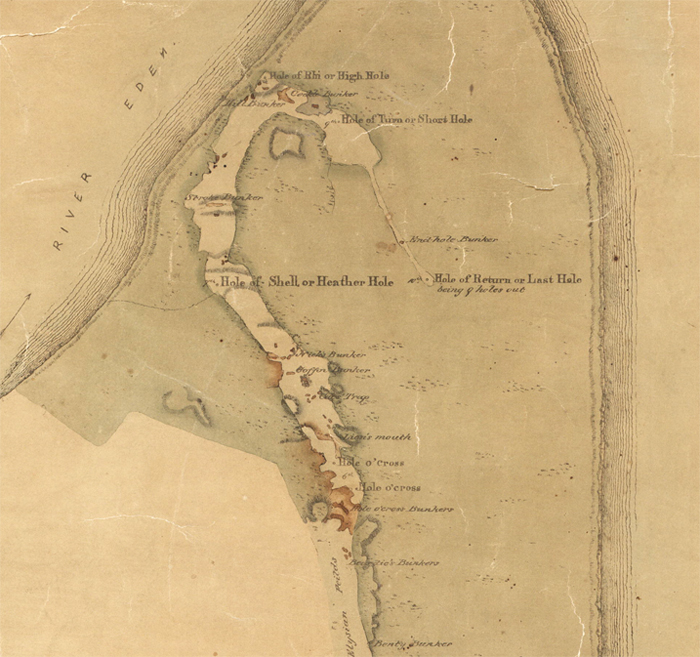 Plan of the Golfing course over the links of St Andrews
surveyed by order of the Royal St Andrews Golfing Society, Fife
National Records of Scotland, RHP414

The 1875 valuation rolls reveal that Old Tom Morris owned his own premises at Pilmour Links, a house, shop and garden, with a valued rent of £30. His rival maker, Robert Forgan, lived and worked next door. Morris' wife, Nancy, by then an invalid, was renting a small house nearby. Young Tom Morris, then a young man in his twenties, was a tenant of a house and garden on North Park Road. 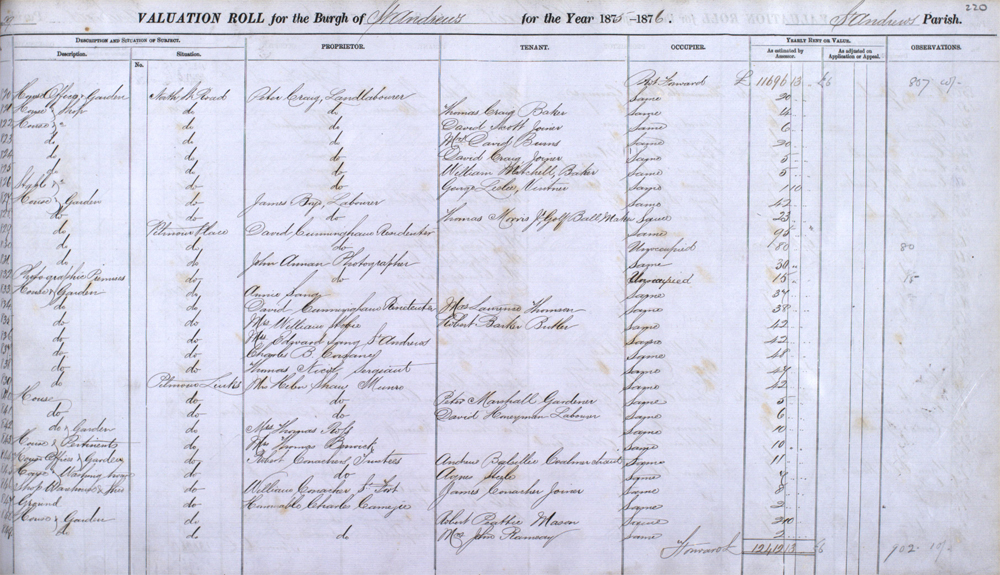 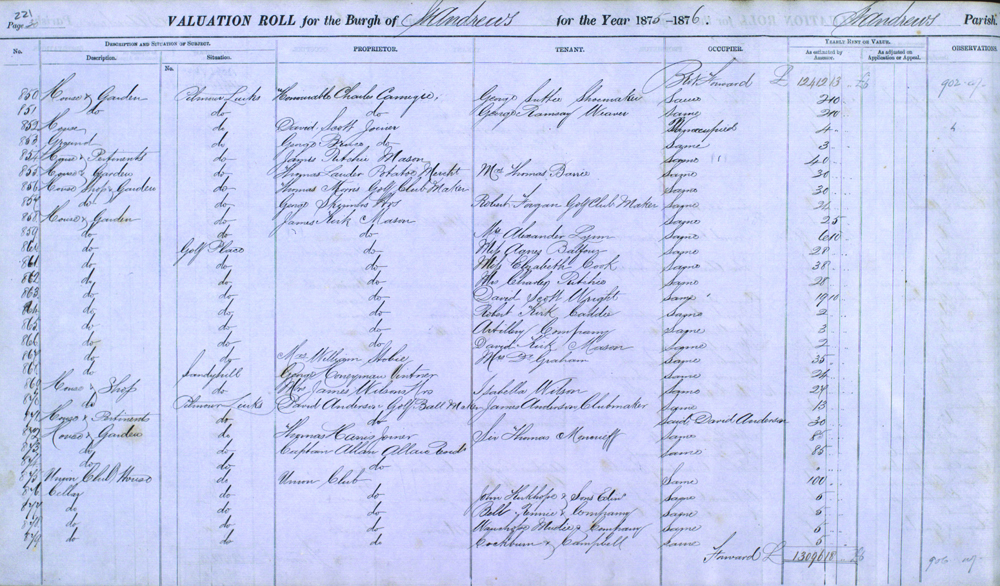 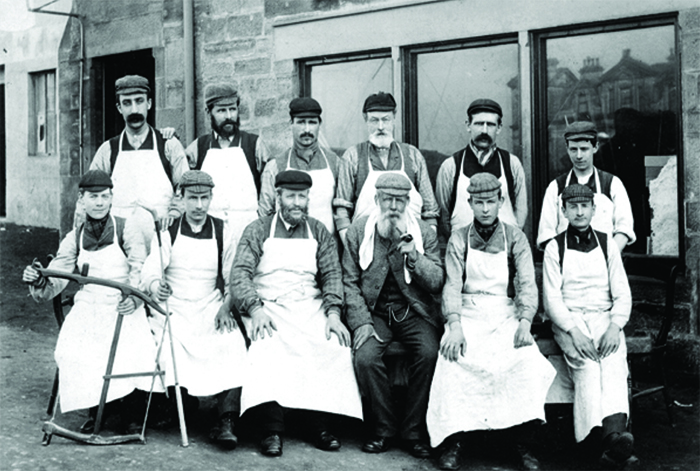 Young Tom Morris, born 1851, joined the family business and also became a very skilled golf player. His father admitted young Tommy's superiority as a player. In 1868, aged 17, Young Tom won the Open Championship, and by repeating the feat twice more in successive years, became the outright winner of the champion's belt in 1870.

Next year the census enumerator recorded his occupation as 'Champion Golfer of Scotland'.

On 25 November 1874 Young Tom married Margaret Drinnan or Drennan from Fife, 'a remarkably handsome and healthy young woman: most lovable in every way' (W W Tulloch, 'The Life of Tom Morris' (1907), p.183).

The year 1875 began well for the Morris family - in February Tom's daughter Elizabeth married James Hunter, a Scottish timber merchant based in the United States. James Hunter supplied hickory wood for making golf clubs, and was a cousin of Charlie Hunter, Morris's successor as the professional golfer at the Prestwick golf club.

On 12 September Tom and his son were winning some professional matches at North Berwick, when a telegram arrived with the news that Young Tom's pregnant wife had fallen ill. They hurried home to St Andrews, but Margaret had died in childbirth the day before, along with her baby. Old Tom evidently wished to spare his son the painful duty of registering his wife's death, so he was the one to inform the local registrar and sign the register.

Young Tom was devastated. 'He went about like one who had received a mortal blow. Even his beloved game failed to rouse him' (W W Tulloch, 'The Life of Tom Morris' (1907), p.184). In mourning, he moved back into the Morris home at 6 Pilmour Links, St Andrews. Three months later, on 21 December, he died suddenly from a lung haemorrhage. In facing this heavy blow Old Tom was sustained by his strong religious faith and an outpouring of grief from friends and members of the golfing community in Scotland and beyond, who mourned the loss of a popular champion and a beloved man.

After her death Old Tom Morris continued to work at his club-making business, assisted by James and John. Above all he played on - golf was a source of solace and inspiration. He continued to compete in and sometimes win professional matches into his seventies. His spartan habits may have helped keep him fit, but his long lifespan exposed him to further personal losses that must have been hard to bear.

Plan of the Golfing course over the links of St Andrews
surveyed by order of the Royal St Andrews Golfing Society, Fife
National Records of Scotland, RHP414

A great golfer and the best of men

In his later years Old Tom remained a sporting celebrity, almost a tourist attraction in his own right. Having designed golf courses earlier in his career, in his seventies and eighties he carried out many more commissions around Britain.

After he retired as greenkeeper in 1904, the Royal and Ancient Golf Club paid him a handsome pension. His business continued but in April 1906 Morris lost his last surviving offspring when James died suddently of heart failure aged 51. He had named him James Ogilvy Fairlie in honour of his patron, Major James Ogilvy Fairlie, who had invited him to be the first green keeper at Prestwick in 1851.

Morris outlived James by two years. On 24 May 1908 he fell downstairs at the New Golf Club in St Andrews, sustaining a head injury from which he died in the Cottage Hospital. He was almost 87 years old.

By the time he died in 1908, Old Tom's only surviving family were his grandchildren. The inventory of Tom Morriss' estate indicates the extent of his professional reputation - and golf's growing appeal across the world. At the time of his death he had customers in Britain, Europe and Canada, ranging from the town and gown of St Andrews, Scottish landowners, golfers from the English Home Counties, and golf shops around Britain. 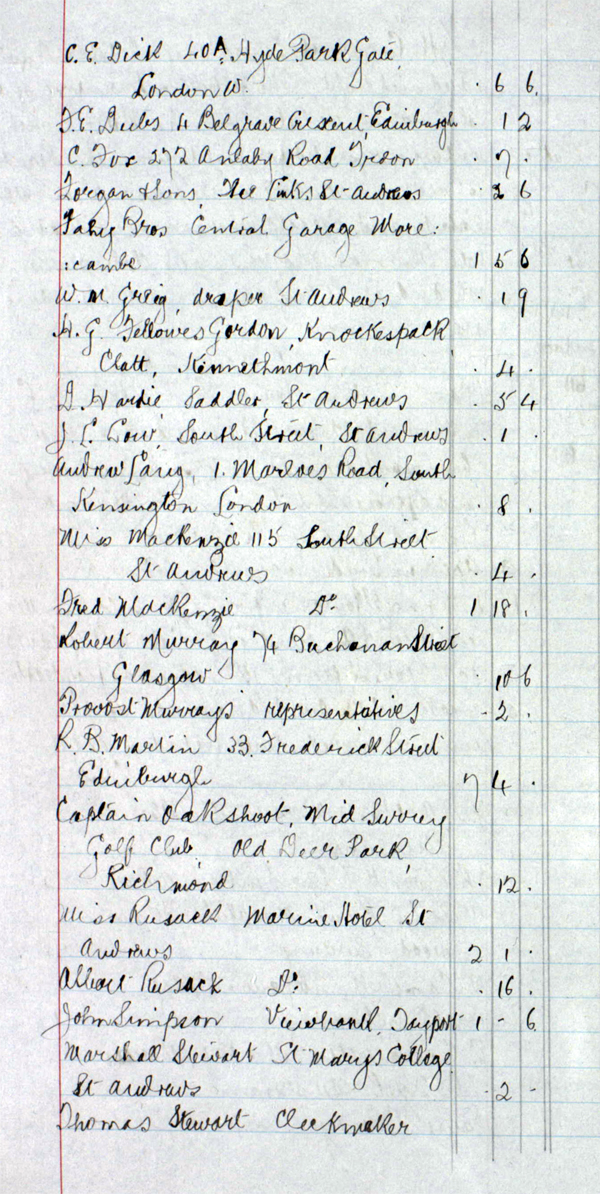 Among them was Andrew Lang (1844-1912) the distinguished author, journalist, folklorist, anthropologist, and compiler of several much-loved collections of fairy stories. A Scot based in London, he was a keen golfer and had expressed his admiration for Old Tom Morris in verse.

Other customers formed a cross-section of Edwardian society. Helen and Frederick Mackenzie were the children of Alexander Mackenzie, a prosperous ironmonger in St Andrews. Miss Rusack and Albert Rusack's father was the hotelier whose name is still attached to the famous St Andrews hotel. Alexander Marshall Stewart was a former St Andrews student and son of the Principal of St Mary's College there. He became a soldier and died in Canada in 1945. Robert Stanley Weir (1856-1926), whose name appears in the following pages of Morris' inventory, was the Recorder of Montreal, a local judge, whose claim to fame is as the author of Canada's national anthem, 'O Canada', which he first translated from the French in 1908. Weir was born in Hamilton, Ontario to a Scottish immigrant father.

The Grand Old Man of Golf

News of Old Tom's death travelled far and wide and was keenly felt in his home town. The Dundee Courier reported that "the news of the sad affair came as a shock to every resident of St Andrews, who looked upon Old Tom as peculiarly their own" and noted that visiting golfers from all parts of the world will miss "the old man's familiar figure" (Dundee Courier, 25 May 1908). Considered a founding father of the game, Old Tom Morris has been inducted into many a sporting hall of fame and remains a golfing icon to this day.