Her Majesty the Queen was bound to Scotland by ties of ancestry, affection and duty. She was descended from the Royal House of Stewart on both sides of her family. Her relationship with Scotland and the Scots began in childhood, and deepened during her many private as well as official visits throughout the seven decades of her reign.

Her parents shared a common ancestor in Robert II, King of Scots. Through her father King George VI she was directly descended from James VI of Scotland. Through her mother’s family, the Bowes-Lyons, Earls of Strathmore, she could trace her ancestry back through generations of Scottish nobility to Sir John Lyon, Thane of Glamis, who married Robert II’s daughter in the fourteenth century. 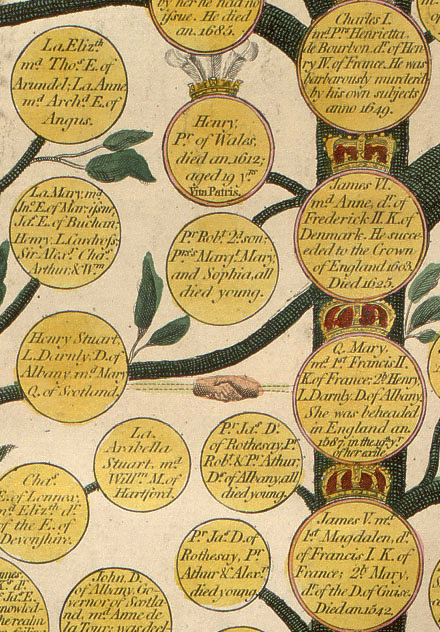 Detail from ‘An Historical and Genealogical Tree
of the Royal Family of Scotland’ by John Brown, 1792
Crown copyright, National Records of Scotland, RH16/135 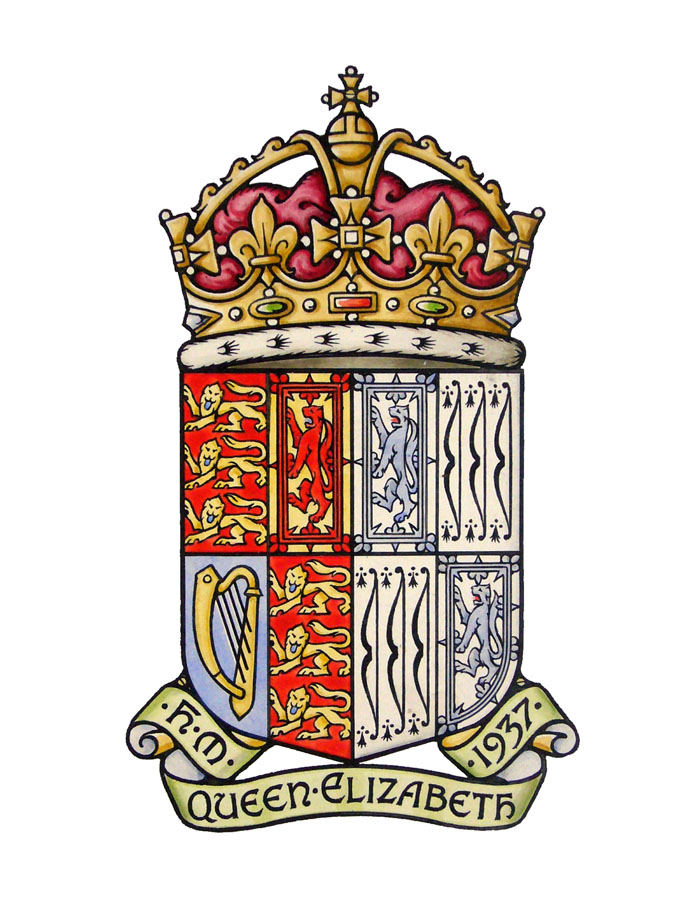 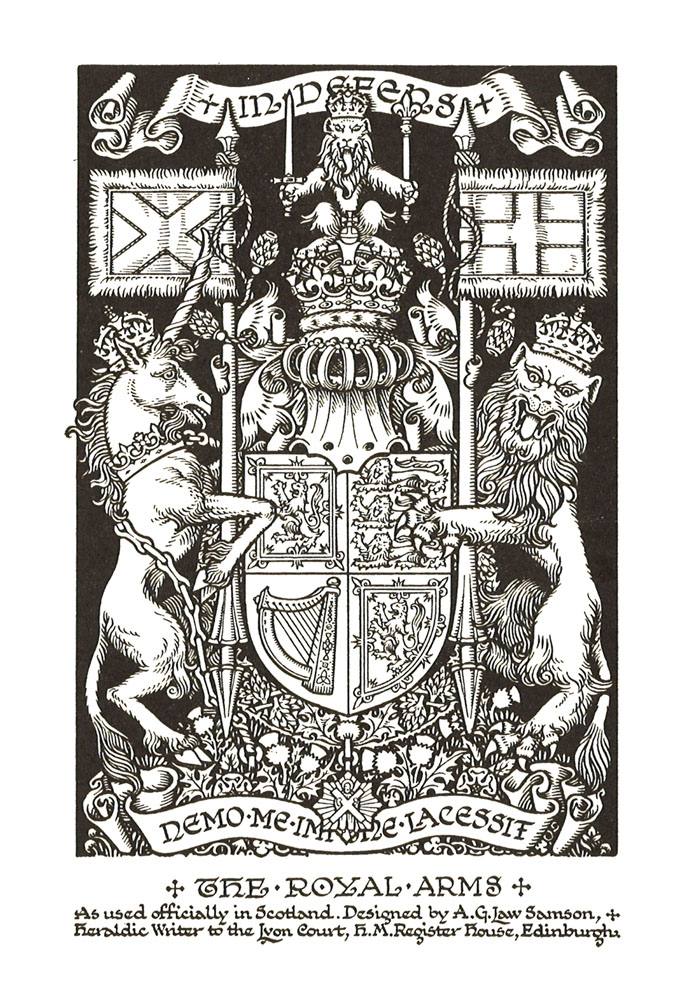 Royal Coat of Arms of the United Kingdom for
use in Scotland, drawn by AGL Samson, Lyon Court
Court of the Lord Lyon

During the Second World War Princess Elizabeth and her sister were often photographed with their parents in order to project an image of stability and fortitude on the Home Front. She began to undertake public duties in connection with the war, but she also wished to contribute more actively to the war effort. In early 1945 at the age of 18 she was given this opportunity when she joined the Auxiliary Territorial Service (ATS). As a junior officer she underwent mechanical training and qualified as a driver. 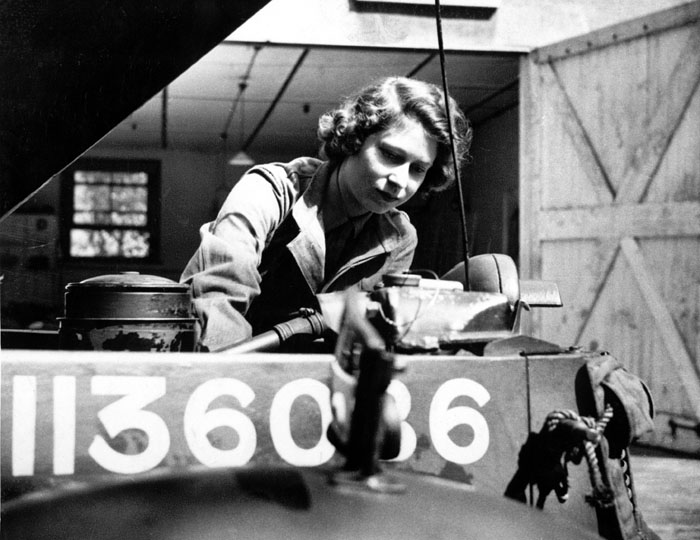 Photograph of Princess Elizabeth at the No. 1 Mechanical
Training Centre of the Auxiliary Territorial Service, 1945
Crown copyright, National Records of Scotland, NSC1/394/47

On 8 February 1952, two days after the death of her father King George VI, the new Queen signed an Oath by which she promised to uphold the ‘Government, Worship, Discipline, Right and Privilege of the Church of Scotland.’ This was in accordance with the provisions of An Act for securing the Protestant Religion and Presbyterian Church Government, an important measure passed at the same time as the Act of Union formed the United Kingdom in 1707, and which is still in force.

This signature was one of the very first of the countless times the Queen signed her name ‘Elizabeth R’ during her seventy year reign. Although the Queen was Head of the Church of England, when in Scotland she worshipped in the Church of Scotland, and when staying at Balmoral attended Crathie Kirk. 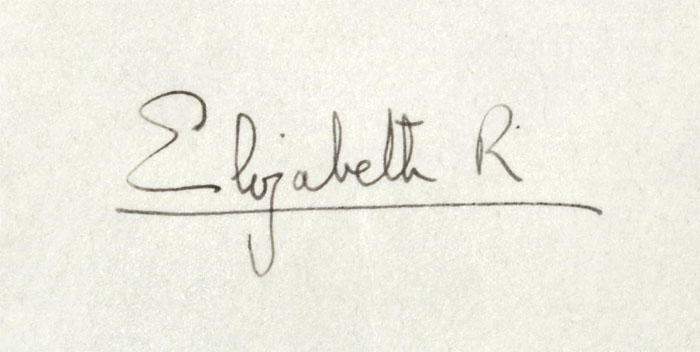 Oath signed by the Queen to uphold the Church of Scotland, 1952
Crown copyright, National Records of Scotland, SP10/14

Shortly after her Coronation at Westminster Abbey, the Queen spent a week in Scotland and attended a National Service of thanksgiving and dedication at St Giles’ Cathedral, Edinburgh, on 24 June 1953. Cheering crowds witnessed a magnificent procession accompanying the royal carriage bearing the Queen and Duke of Edinburgh to St Giles. There the Honours of Scotland, the Crown, Sceptre and Sword, were ceremonially presented to the sovereign, witnessed by 1,700 worshippers from all walks of Scottish life, and seen live on television. The Moderator of the General Assembly captured the moment: ’Today you and I are Scotland, greeting with all that we have to offer of love and duty our gracious young Queen.’ 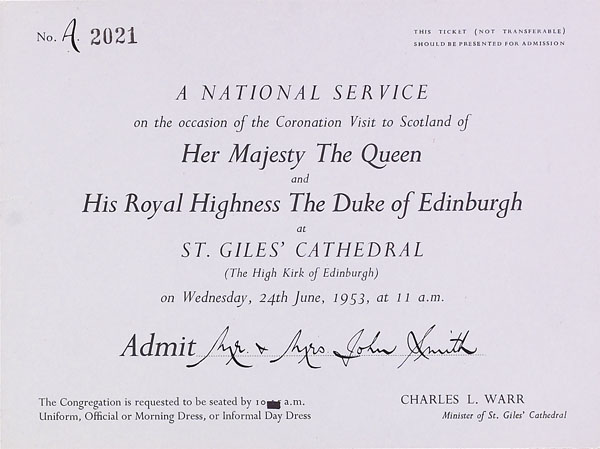 With a new sovereign come new symbols of monarchy. As well as new postage stamps, coins and bank notes bearing the monarch’s likeness, the royal arms are redesigned, new seal matrices are produced, and a formal title is settled upon. Her Majesty was styled Queen Elizabeth II to acknowledge her namesake, Elizabeth I of England, and to avoid the double numbering of some monarchs after the Union of the Crowns in 1603, such as her ancestor James VI of Scotland and I of England. This caused controversy in Scotland, and in 1953 an unsuccessful legal challenge went as far as the House of Lords. New pillar boxes in Scotland bearing the cipher E II R were a public symbol of the unpopular title. After some were attacked in 1952-3 it was decided that pillar boxes, mail vans and Post Office branding north of the border would henceforth only carry the Crown of Scotland. Pillar boxes were manufactured at the Carron Works, whose records are in NRS. 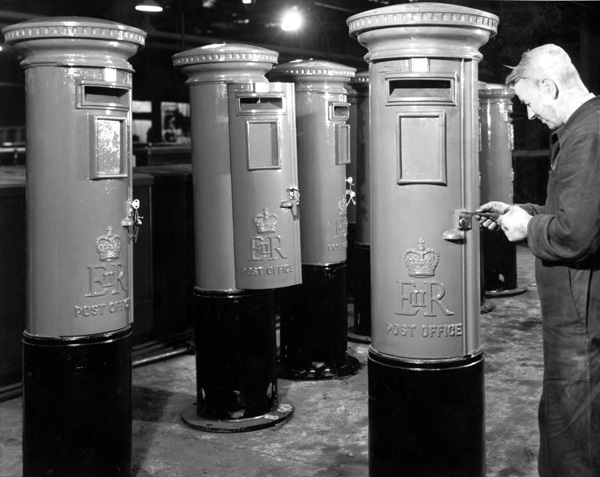 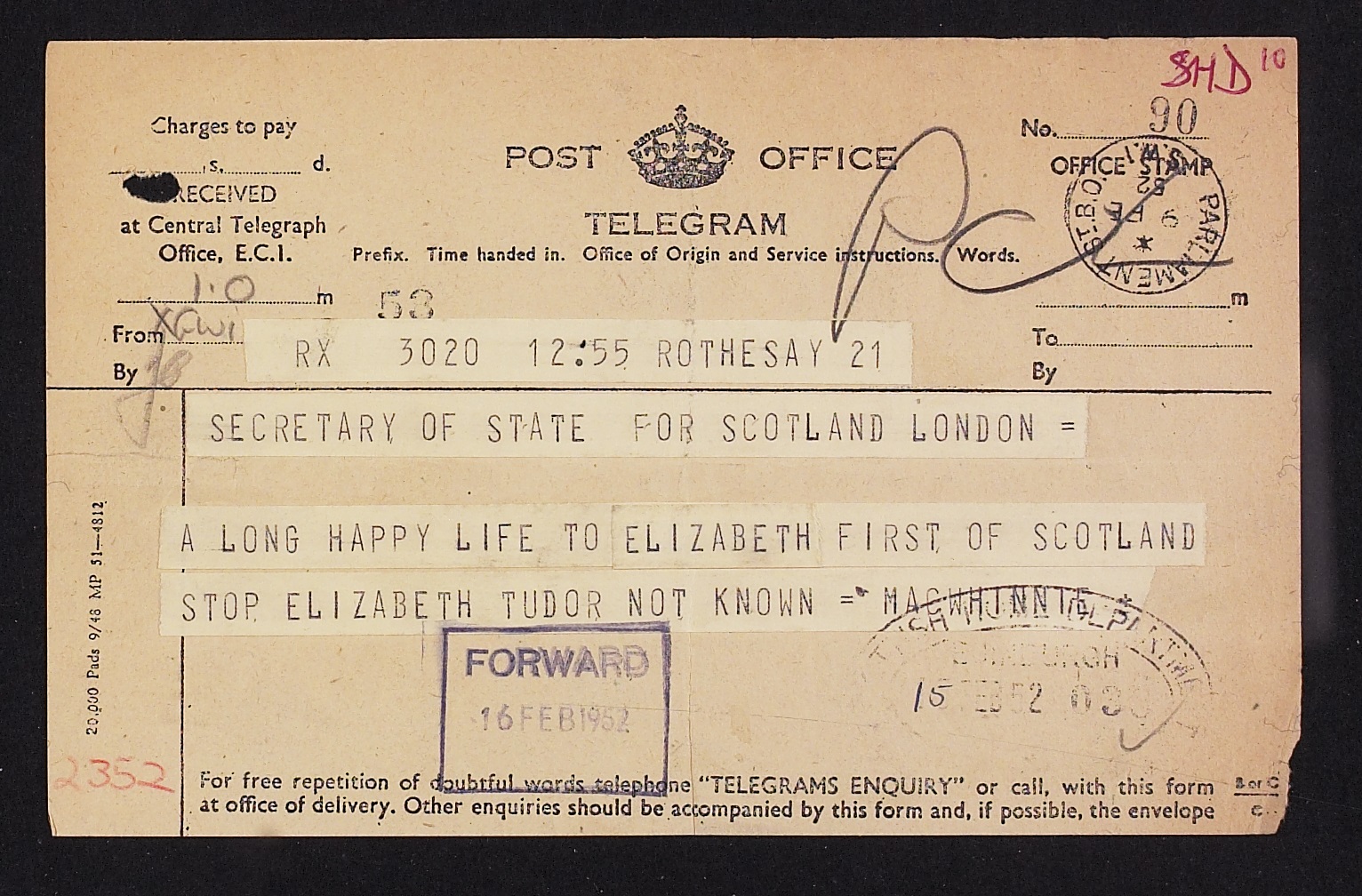 A light-hearted telegram sent to the Secretary of State for Scotland
pointed out that the Queen was the first Queen Elizabeth to reign in Scotland, 1952
Crown copyright, National Records of Scotland, HH91/627

Although the monarch rules over the United Kingdom, the 1707 Act of Union provided for certain powers to endure in Scotland. For instance, a separate Scottish seal continues to be used to signify the monarch’s approval of official appointments in Scotland and of the passing of new laws by the Scottish Parliament. Nowadays the First Minister of Scotland is Keeper of the Great Seal, and the Keeper of the Registers of Scotland has custody of the seal matrix as deputy to the First Minister.

Royal Commissions are given under the Great Seal of Scotland. The original warrant was ‘superscribed’ by the Queen with her signature. The example here dates from 1996, when the Queen appointed four officials to be commissioners to guard the Stone of Scone on its return from Westminster Abbey to Edinburgh. 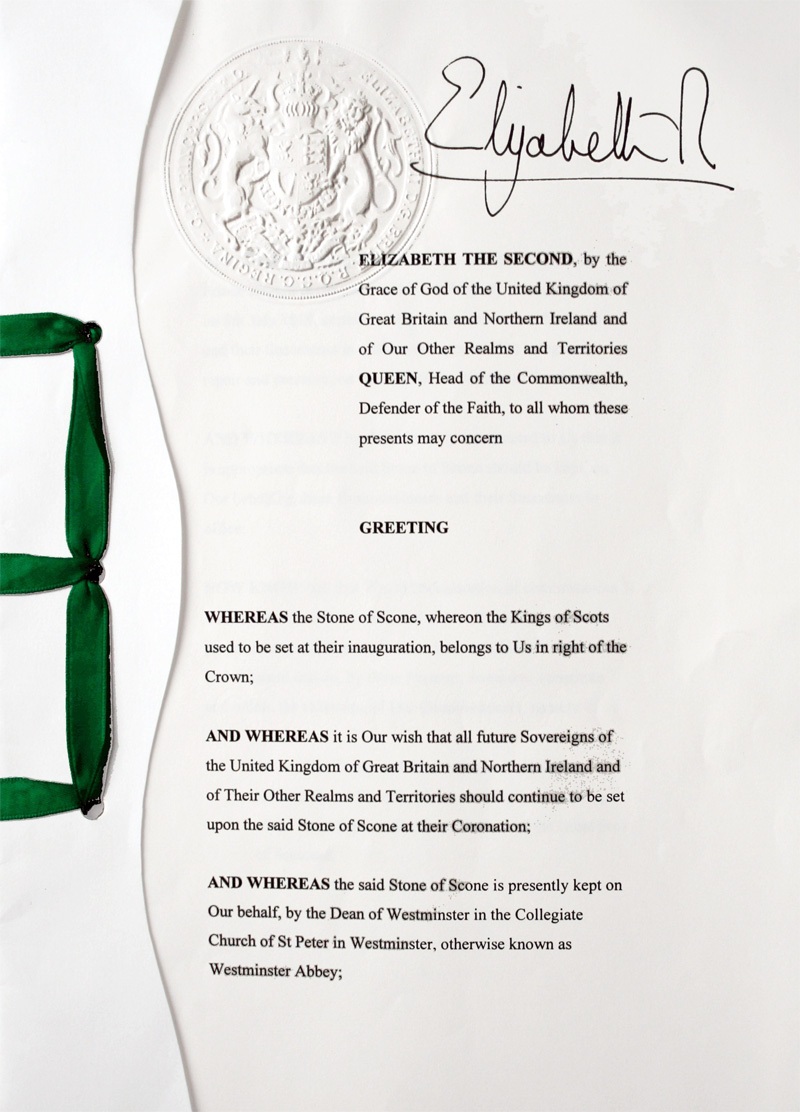 Commission to officers of state to guard the Stone of Scone, 1996
Crown copyright, National Records of Scotland, C9/51/161

Before an act of the Scottish Parliament can become law the monarch has to give assent. To do this, the Queen signed ‘letters patent’ under the Great Seal of Scotland. Expert conservators in National Records of Scotland assist in the physical preparation of all letters patent. The Great Seal matrix, which was created at the Queen’s accession, was used to cast a double-sided wax seal that was attached to official documents by a ribbon. A conservator hand crafts every seal using traditional beeswax. 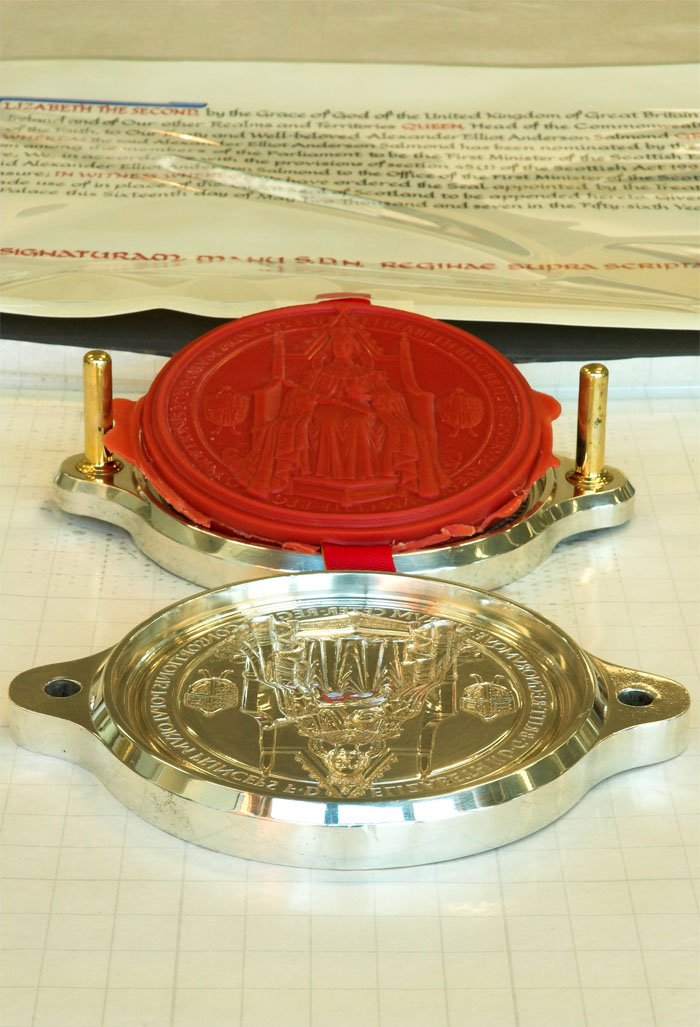 The Queen’s official residence in Scotland was the ancient royal Palace of Holyroodhouse in Edinburgh, where she based herself and her court when in the capital city. Balmoral in Aberdeenshire was the Queen’s beloved family home, created by Queen Victoria and Prince Albert as the royal family’s private retreat in Scotland. The Queen took a personal interest in those living and working at Balmoral, many of whose families have a tradition of serving the royal family there. 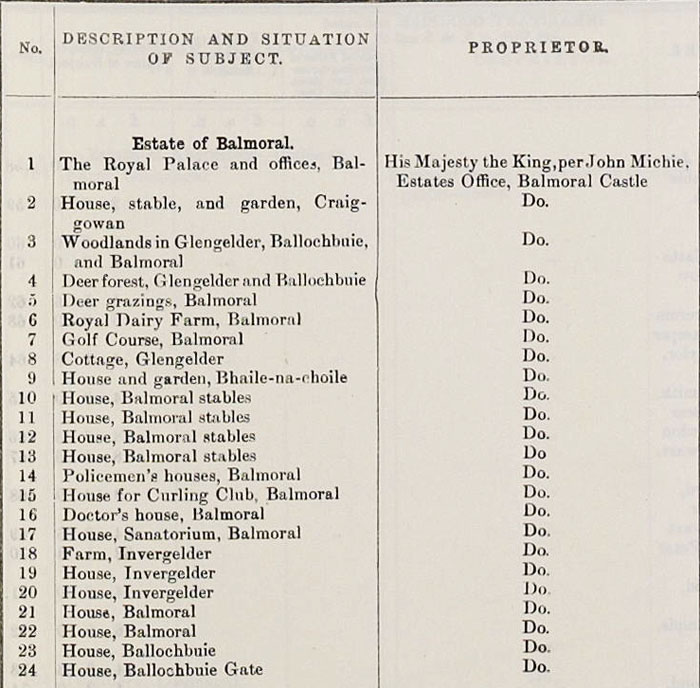 Learn more about the royal family and the Balmoral estate.

The Royal Yacht ‘Britannia’ was launched by HM Queen at John Brown’s shipyard in Clydebank on 16 April 1953. A crowd of more than 30,000 at the dockside sang Rule Britannia. ‘Britannia’ carried the Queen and her family on many happy voyages in Scottish waters and around the world until the vessel was de-commissioned in 1997. 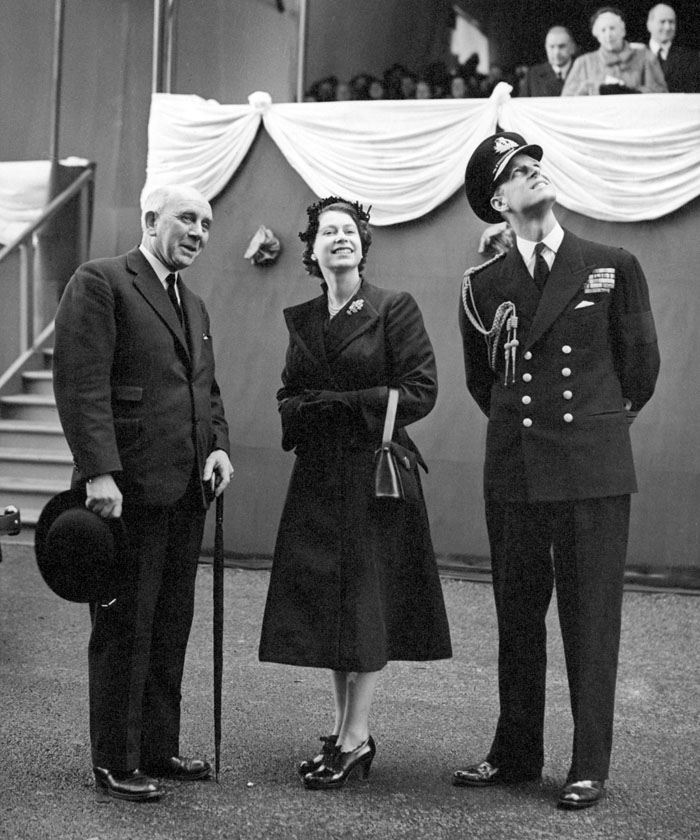 The Queen and the Duke of Edinburgh at the launch of Britannia, 1953
Upper Clyde Shipbuilders Collection, Crown copyright, National Records of Scotland, UCS1/118/691

The Cunard liner ‘Queen Elizabeth 2’ was completed by John Brown’s Shipyard at Clydebank in 1967. The previous ‘Queen Elizabeth’ was built in the 1930’s and named after the Queen’s mother, Queen Consort of George VI. The Queen launched the QE2 on 27 September 1967. For images of the launch see our Image Gallery.

Milestones in the Queen’s long reign were the occasion of public celebration and congratulation by citizens and institutions alike. In 1977, for example, the Silver Jubilee of her accession to the throne was marked throughout Britain. Among the loyal addresses from bodies with a royal charter was one from the Royal Scottish Academy of Painting, Sculpture and Architecture, signed by its president, the painter Sir Robin Philipson. It thanks the Queen and Prince Philip for their ‘great encouragement to the flowering of the arts in Scotland.’ Prince Philip, a well-known patron of the arts, became an honorary academician in 1963. 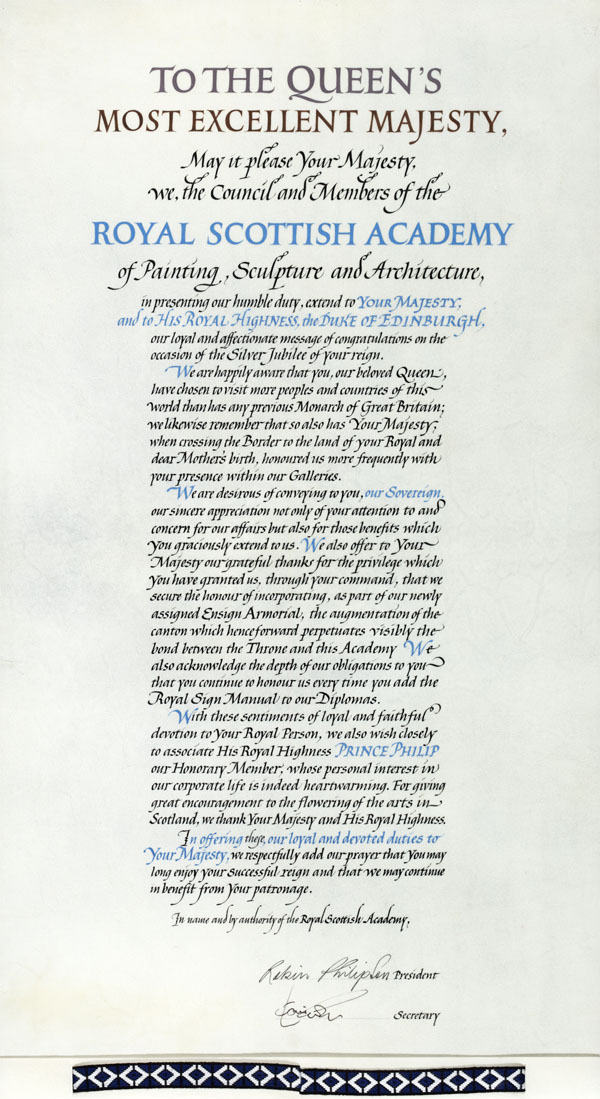 The Queen celebrated her Platinum Jubilee in June 2022.

Her Majesty the Queen fulfilled countless engagements on her many royal visits to Scotland. She visited General Register House three times: first on 27 June 1952 during her first official visit to Scotland as Queen, secondly to mark the bicentenary of the building on 2 July 1974, and latterly to open the ScotlandsPeople Centre on 4 July 2008. 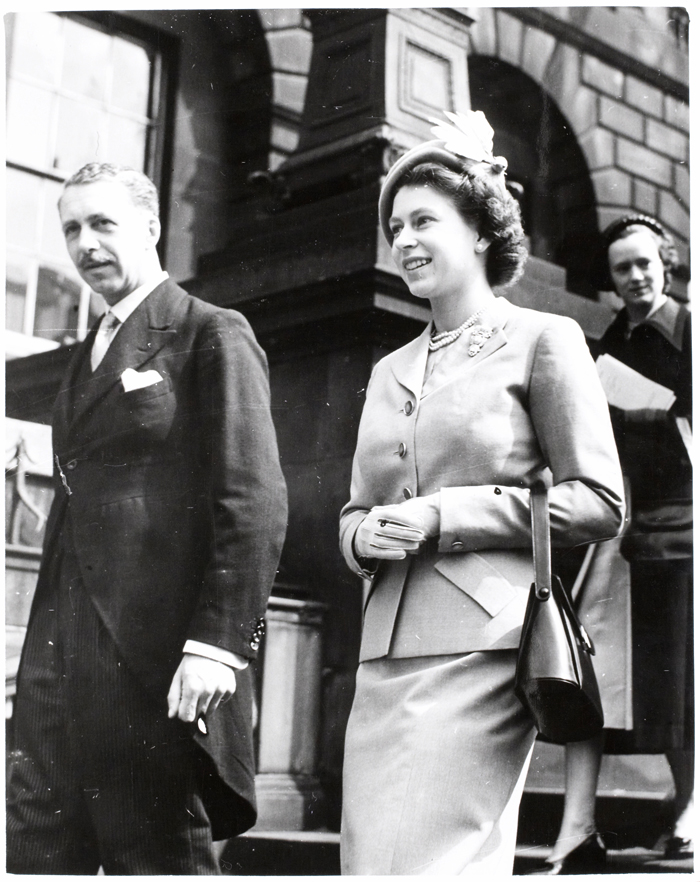 The Queen with Sir James Fergusson of Kilkerran, Keeper
of the Records, at General Register House, 1952
Crown copyright, National Records of Scotland, SRO21/9/8 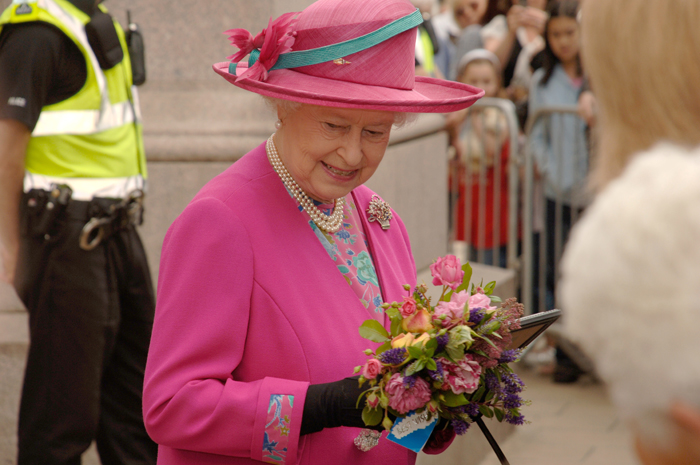 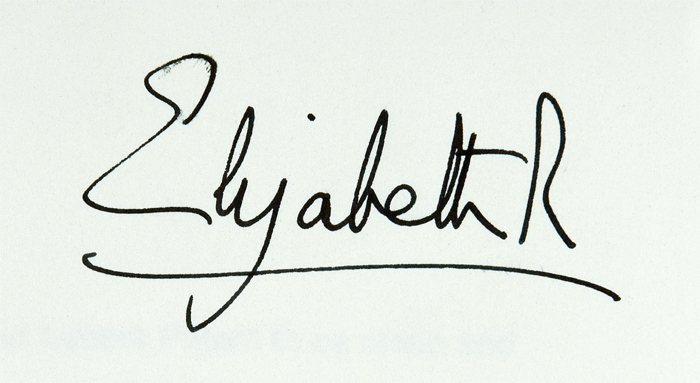 The death of Queen Elizabeth II

In July 2022 the Queen travelled to Balmoral Castle in Aberdeenshire for her yearly summer retreat. It was there that she died on the afternoon of Thursday 8 September 2022 surrounded by her family. Her eldest son, King Charles III, succeeded her.