The Case of Oscar Slater

The Case of Oscar Slater 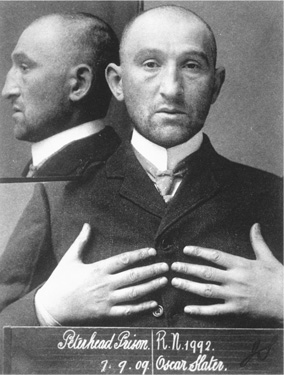 National Records of Scotland (NRS) is the principal repository of original documents relating to the case of Oscar Slater, which continues to intrigue researchers more than a century after the murder in Glasgow of a wealthy 82-year old lady, Miss Marion Gilchrist. She had been living a quiet life with her one young maidservant, Helen Lambie, in a large first floor flat at 15 Queens Terrace, West Princes Street, Glasgow. On 21st December 1908 Miss Gilchrist was murdered shortly after 7pm, after Helen had gone out to buy the evening newspaper and do a few errands. She was found bludgeoned to death in the dining room.

Miss Gilchrist obviously knew her attacker as there was no sign of a forced entry to her flat, and he was presumably aware of their routine. The motive appears to have been robbery although only one item from her large jewellery collection, a crescent-shaped diamond brooch, was found to be missing.

Helen painted a picture of their life when she was examined by the Lord Advocate during the murder trial:

"Miss Gilchrist had not very many visitors. There were some business gentlemen that came to the house...I know that she had a great many jewels...she wore jewels every day, usually a ring and a brooch...when she went out to tea and to dinner she wore more jewels.

...It was the usual practice for me to go out errands in the evening. I usually went out on my errands about six o'clock and sometimes a little later..."

Photographs of the interior and exterior of Miss Gilchrist's house and an inventory of her jewellery give an impression of her life. 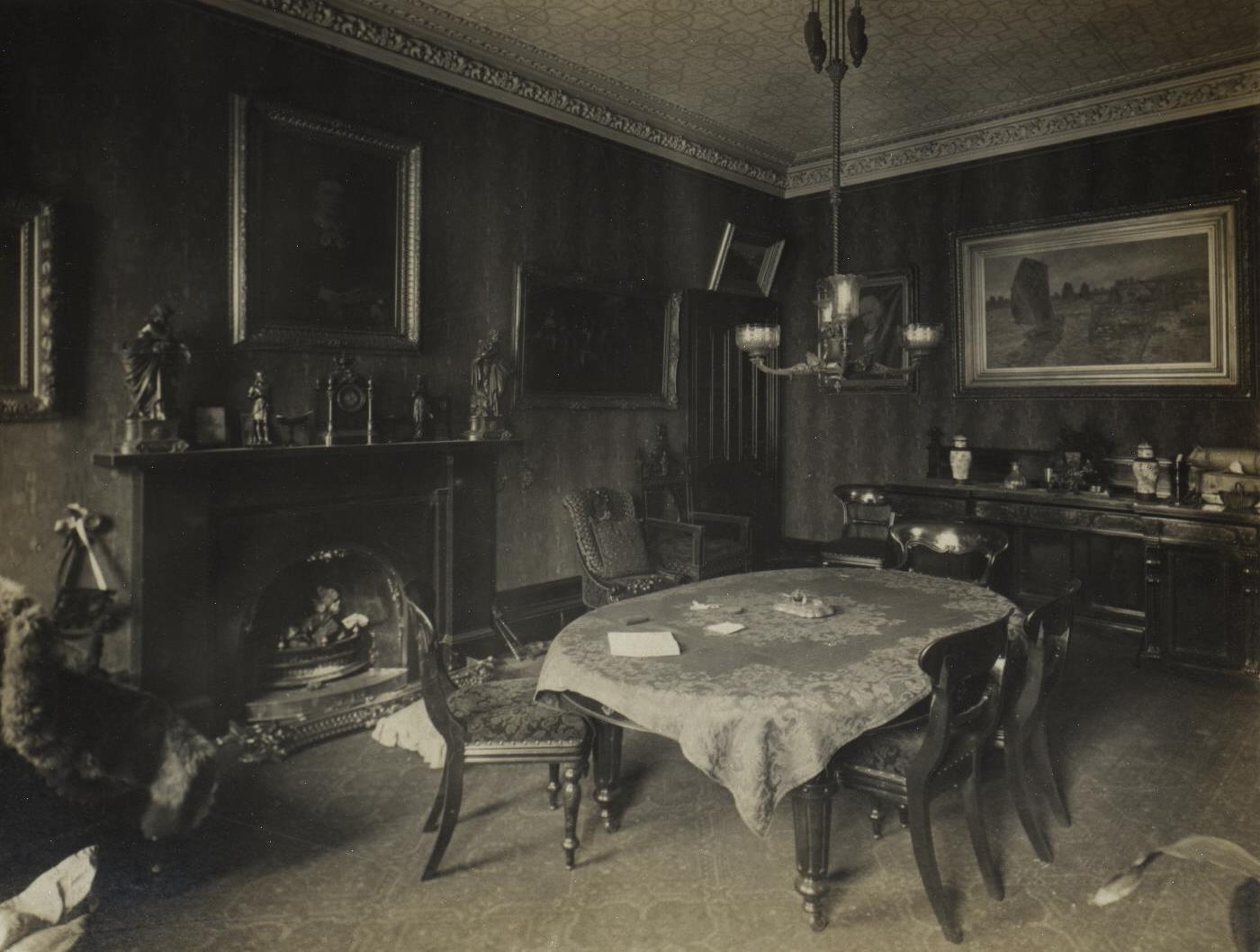 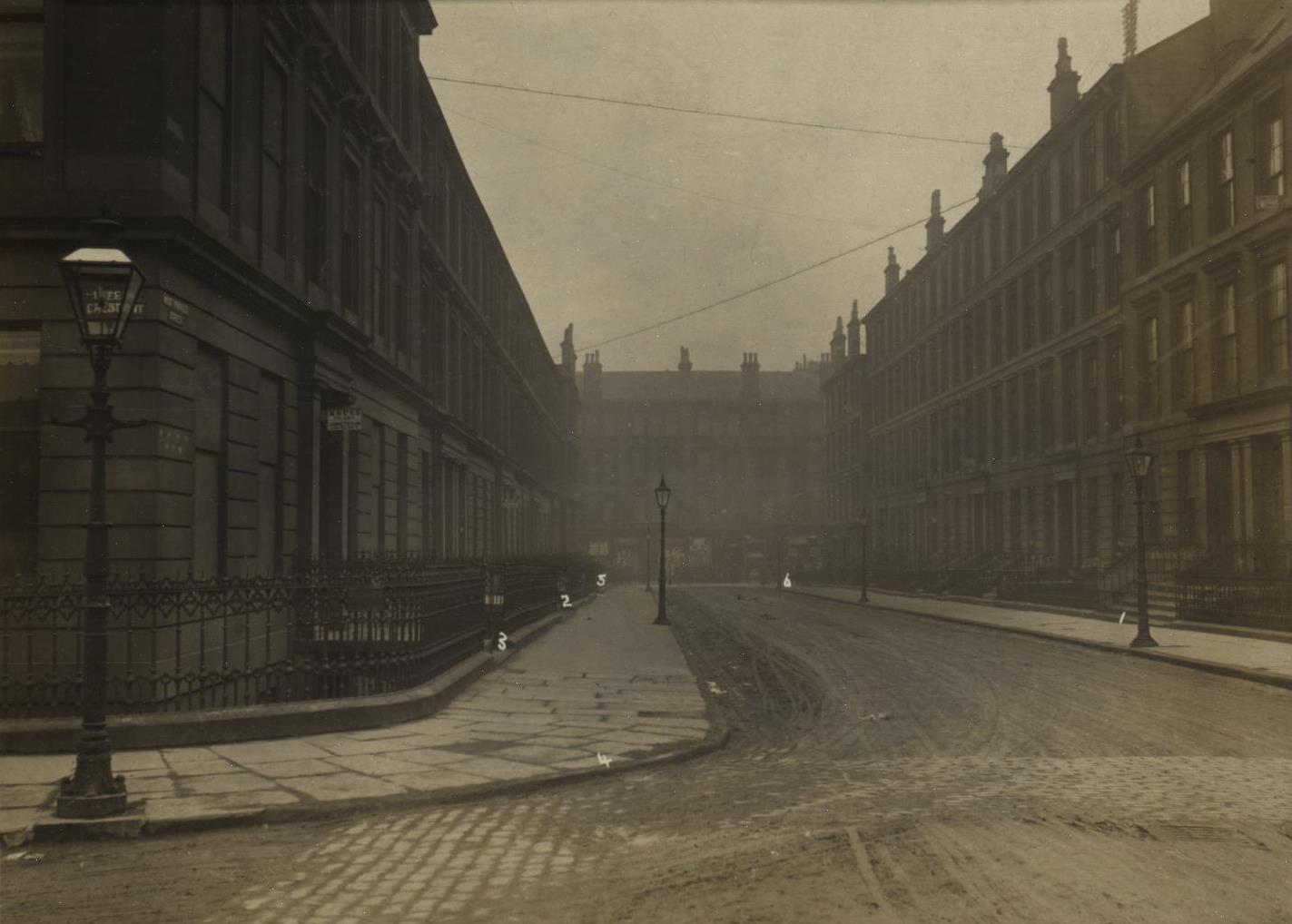 Miss Gilchrist's downstairs neighbour, a Mr Adams, hearing a disturbance, had gone out of his flat to investigate and passed a man hurrying down the staircase. Helen Lambie passed the same man heading down the stairs as she re-entered the building. A 14 year old girl, Mary Barrowman, who was in the street at the time, had also spotted a man hurrying out of the building. Although their descriptions of this fleeing person did not match, the police immediately suspected Oscar Slater as the murderer.

They already knew him as a disreputable foreigner and an associate of prostitutes, thieves, burglars, and resetters. They also had reason to believe he was an illegal gambling-den operator. He had already been prosecuted for malicious wounding and assault in London, and disorderly conduct in Edinburgh before he came to Glasgow.

Oscar Joseph Slater (originally Leschziner) was born in 1872 in Upper Silesia, Germany, to Jewish parents – his father was a master baker. In 1893 or 1894 he travelled to London, possibly to evade military service, and worked as a bookmaker there, before setting himself up as a dealer in precious stones.

Once settled in Britain he used various surnames - Sando, George, Anderson, Schmidt and Slater. It was the latter he appears to have used for official purposes. By 1899 he had moved to Edinburgh. He at various times claimed to be a gymnastics instructor and a dentist, although his business interests in jewellery continued. At the time of Marion Gilchrist's murder he was living only a few blocks away from her street in Glasgow. 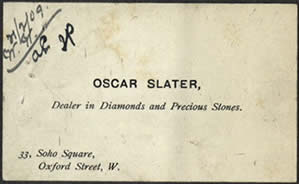 Slater seems to have done himself few favours in the days following the murder, leaving Glasgow almost immediately. On Christmas Day he signed in at the North Western Hotel in Liverpool with a female companion, before boarding the ocean liner the Lusitania, bound for New York, the next day. Tickets for the crossing had been booked with Cunard Line through Thos. Cook & Son in Glasgow on 23rd December in the name of Mr & Mrs Oscar Slater but, curiously, they were issued in the name of Mr & Mrs Otto Sando. 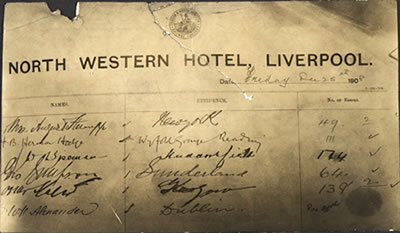 The police were waiting for him on his arrival in New York and he was taken straight to The Tombs prison, from where he penned an impassioned letter to his friend, Hugh Cameron.

Slater was found to be in possession of a pawn ticket for a brooch, which further served to incriminate him in the eyes of the Glasgow police. They assumed wrongly that this was the brooch that was missing from Miss Gilchrist’s flat. They applied for his extradition, but Slater returned to Scotland voluntarily, hoping to clear his name. He was charged with murder upon his return to Glasgow, but declared his innocence from the outset.

Following his trial in the High Court of Justiciary in Edinburgh in May 1909, Slater was found guilty of murder by a majority verdict and he was sentenced to execution. This was commuted to penal servitude for life. He was transported to Peterhead Prison in the north-east of Scotland, where he remained for the next eighteen and a half years. 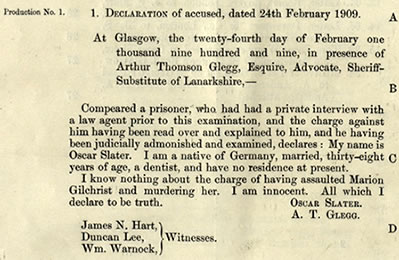 The entry for Oscar Slater in the 'Oxford Dictionary of National Biography' (2004) describes Slater as a 'victim of miscarriage of justice'. There was an immediate outcry after the guilty verdict was pronounced, and much campaigning to have him cleared during the following two decades, most notably by Sir Arthur Conan Doyle, who published 'The Case of Oscar Slater' in 1912. Slater's supporters claimed that aspects of the investigation and the trial had been mishandled, with too much emphasis having been placed on his unsavoury character and former misdeeds, and on the statements of the key witnesses which later turned out to be unreliable. Also, Slater's alibi was never disclosed and the 'incriminatory' pawn ticket was found to relate to a transaction which had taken place several weeks before the murder. As early as 1910 'The Trial of Oscar Slater' appeared, in which William Roughead examined worrying aspects of the trial as part of the Notable British Trials series. In 1914 Detective Lieutenant John Thomson Trench, one of the police officers involved in the original investigation, disclosed information implicating one of Miss Gilchrist's relatives, which he alleged had been concealed by the police in 1909. Trench was dismissed from the police force following this disclosure. In 1927 the publication of ‘The Truth about Oscar Slater’ by a Glasgow journalist, William Park, raised fresh doubts about the reliability of the verdict, and towards the end of that year Slater was released on licence, but not granted a pardon. 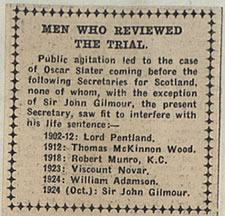 Oscar Slater returned to Glasgow but shortly afterwards moved to Ayr. Not content with his release on licence, and still asserting his innocence, in March 1928 he petitioned the Secretary of State for Scotland for an appeal hearing before the recently-constituted Court of Criminal Appeal. However, the appeal did not have the outcome he hoped for, because his conviction was quashed on the ground that the trial judge had misdirected the jury.

In 1993 Thomas Toughill published 'Oscar Slater, The Mystery Solved', based on newly-released files in the Scottish Record Office (now National Records of Scotland). He argued that there was knowledge at the highest level of what Trench had alleged in 1914, that the referral to the Court of Criminal Appeal was arranged to cover up the fact that Slater had been framed, and that Slater was innocent of the murder for which he was convicted.

Slater accepted £6,000 from the government in compensation for his wrongful conviction. Continuing to live quietly in Ayr, he married his second wife, Lina Wilhelmina Schad, in 1936. Both were briefly interned as aliens at the start of World War II but he went on to apply for naturalisation in 1946. He died aged 76 at 25 St Phillan's Avenue, Ayr, on 31 January 1948, being described as a 'retired journeyman baker' on his death certificate.

The extensive collection of papers relating to the trial of Oscar Slater, principally papers from the Lord Advocate's Department (AD21/5, AD21/6), the Scottish Office Home and Health Department (HH15/20, HH16/109-112) and the High Court of Justiciary (JC34/1/32) may be examined in the Historical Search Room in General Register House, Princes Street, Edinburgh.