In 1922 a fishing legend was born, as Georgina Ballantine proceeded to hook, line and land a record-breaking salmon from out of the River Tay. On 7 October 1922, Georgina landed a salmon weighing 64 lbs and measuring 54 inches long. Out on a fishing trip with her father, James Ballantine acting as his daughter’s ghillie, Georgina battled with the fish for two hours to bring it to dry land. This was record-breaking at the time and is now one of the longest surviving records in the UK, having never been beaten.

Born on 25 November 1889, Ballantine appears to have stayed for the majority of her life at 1 Victoria Cottage, Caputh, Perth. Census records held in the National Records of Scotland (NRS) show her in this house, from one year of age in 1891, up to 31 years old in the recently released 1921 census. These records show the expansion and contraction of the Ballantine nest as more children were born and left, presumably to pursue their own careers and families.

In 1911, the eldest son, James, and daughter Jane Roy, appear to have left the family home, with Helen, now working as a typist for an insurance company, and Georgina remaining.

In 1921 we can see Georgina (31) is enumerated with her parents, as well as a grandson, John Roy Morrison.

These census entries reveal precious information about the family, including the occupations of the time. In 1911, Georgina’s sister Helen is noted as a ‘Typist’. This occupation became more common over the next decade rising from 4.9% (included in occupations of ‘commercial clerks’ in 1911) to 10.69% (included in the occupation of ‘clerks’) by 1921. From 1891 to the 1921 census entry, we can see that her father changed profession from ‘Fire & Insurance Agent’ to ‘Inspector of Poor’ and then ‘Inspector of Poor and Registrar of Births etc.’ Another link with the records held in NRS archives, James Ballantine’s signature, is recorded in many of the birth, marriage and death entries of those who were born and lived their lives in Caputh.

James Ballantine’s signature is noted for every entry in the last column and at the bottom of the page as the registrar. 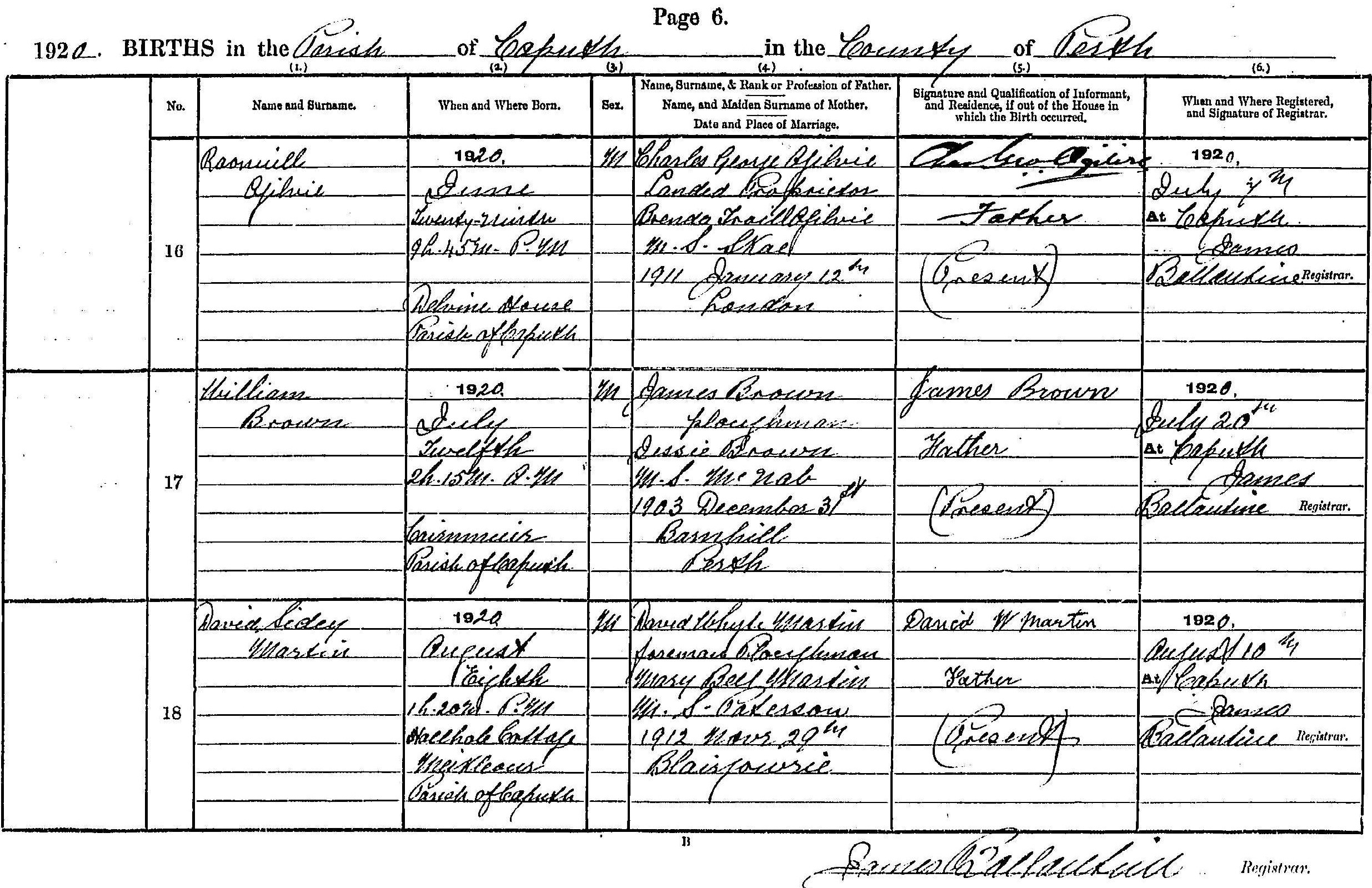 A Nurse and Registrar

Interestingly, in 1921, at the age of 31, Georgina’s occupation is not specified. We know that during the First World War she was a volunteer nurse for the British Red Cross, helping wounded and injured soldiers.

Photograph of Georgina Ballantine in her uniform. Currently on display at Perth Museum and Art Gallery, courtesy of the Morrison Family

After undertaking basic training and service in Perth, she volunteered to serve in France from 1917 to 1919. Records from the British Red Cross Archive show that she was engaged there from 23 March 1917 at ‘No.2 General Hospital Havre’ which is located at Quai De Escales, Le Havre, France. 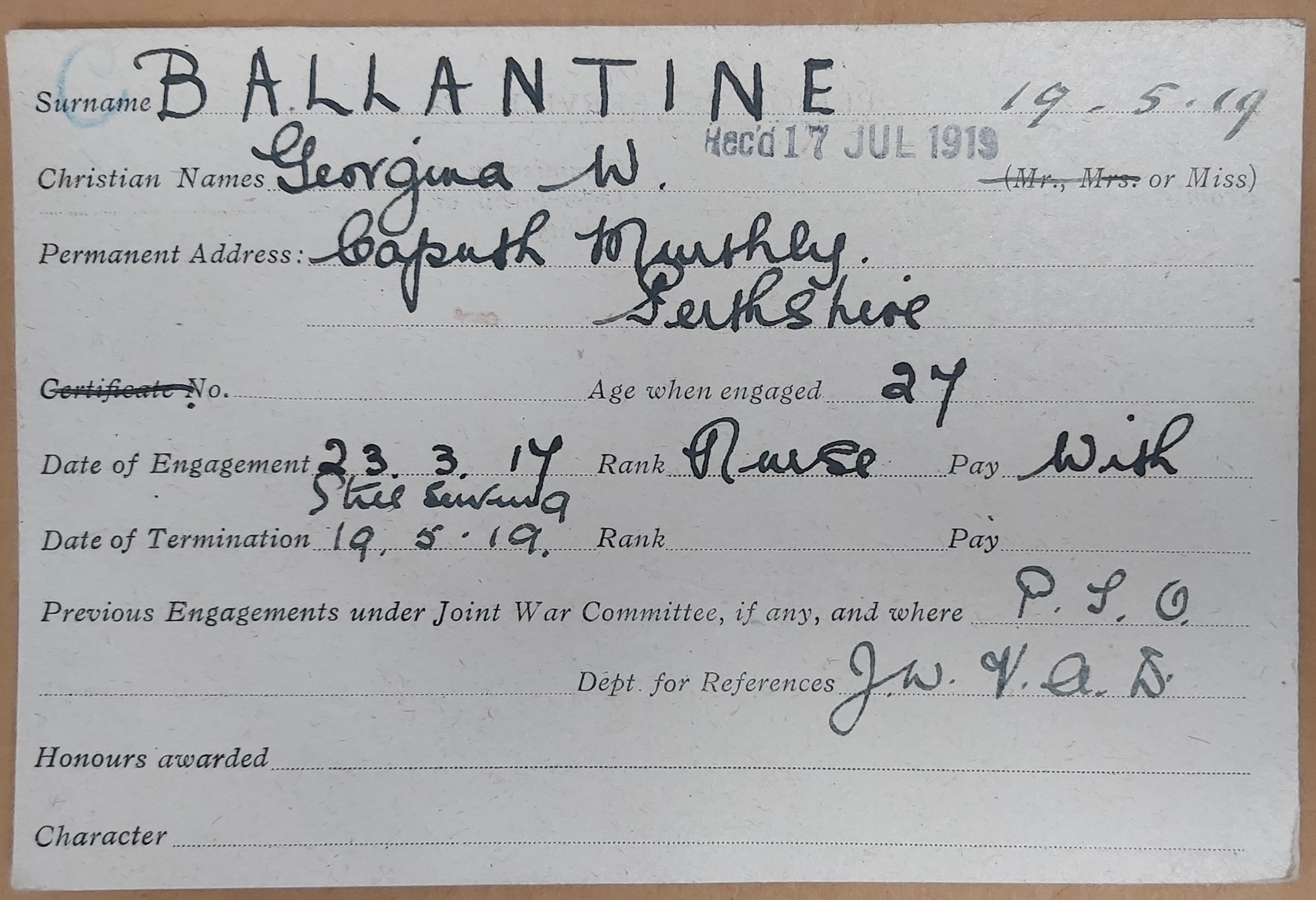 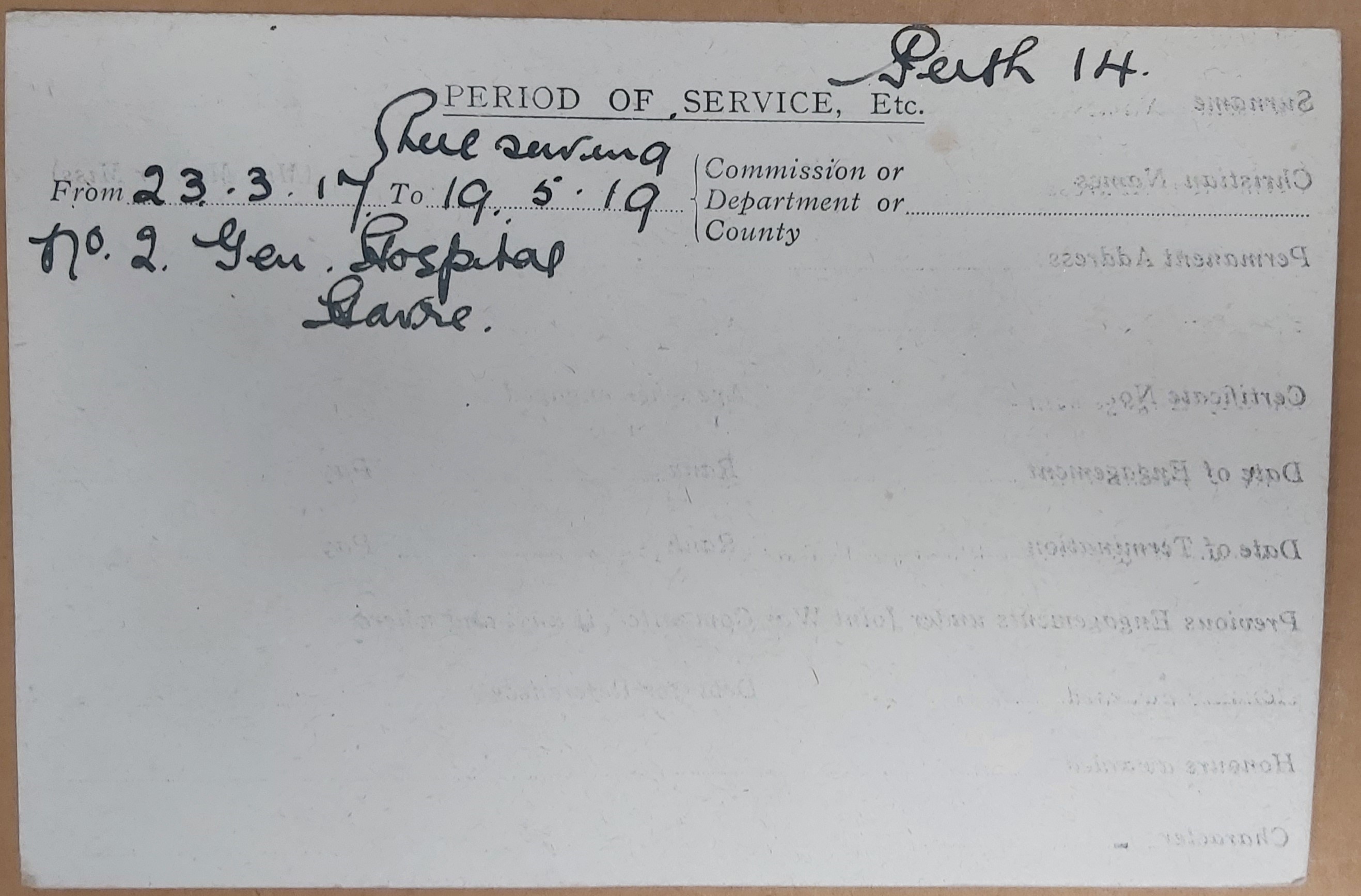 After a further period at a London hospital, she returned home to Perthshire in 1921. Records show that she was decorated for her wartime service. 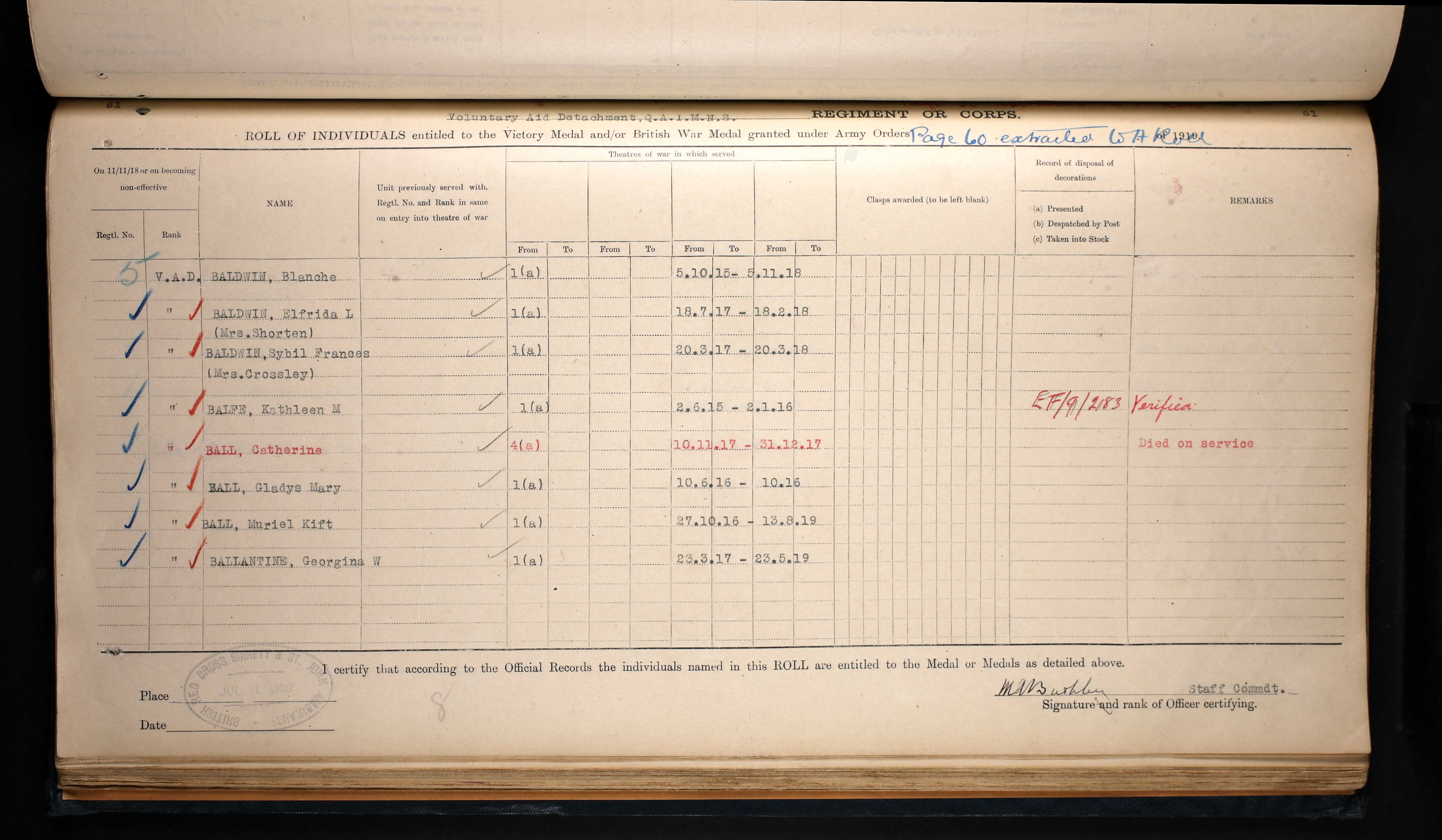 A record of the individuals entitled to the Victory and/or British War Medal, with Ballantine’s details noted at the bottom.
(The National Archives of the UK; Kew, Surrey, England; War Office and Air Ministry: Service Medal and Award Rolls, First World War. WO329; Ref:2317) 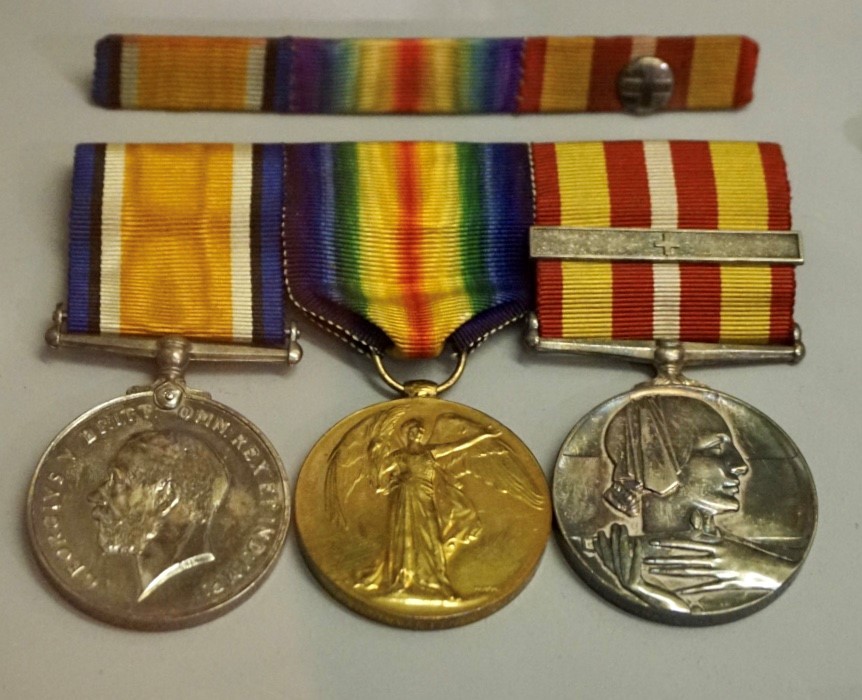 Georgina Ballantine’s medals, from left to right: British War Medal (awarded to those who entered a theatre of war or served overseas); The Allied Victory Medal (awarded to those who entered an active area of fighting); Voluntary Medical Service Medal (the medal and clasp indicate 20 years of continuous service as a First Aid Volunteer with the British Red Cross). Currently on display at Perth Museum and Art Gallery. Courtesy of the Morrison Family.

It is unclear from the 1921 census whether Ballantine was employed, but she appears to have maintained links with the local hospital and was clearly known in the community. After her stupendous catch had been displayed, admired, and a cast taken(!), it was then cut up and served to patients and staff at Perth Royal Infirmary (PRI). A fitting end to the salmon and a tasty treat for those at the PRI. 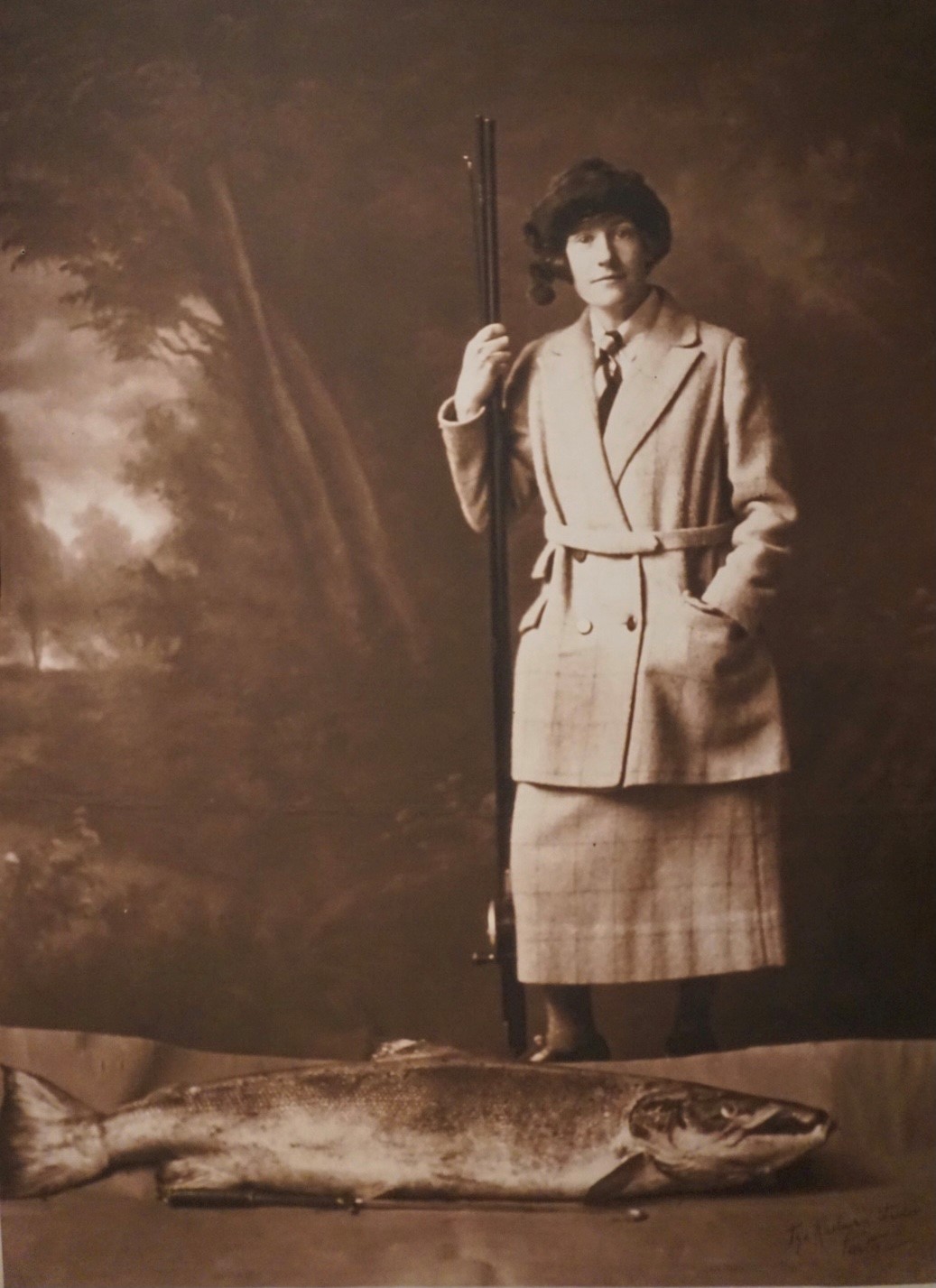 Ballantine’s catch led to her becoming a minor celebratory. In 1923, the tackle company Milwards presented her with their special Fly Brooch, an honour among anglers. Photographs record her standing proudly beside her catch, and with her father, and she would go on to attend various dinners held in her honour. Such was the fame of the catch, that a watercolour of the fish was produced; it was displayed in a gentleman’s club that did allow access to women, barring Ballantine from seeing the commemoration of her own endeavours.

While there is no record of Ballantine’s occupation in the 1921 census, the records of the General Register Office reveal that on 27 November 1926 her father, James, wrote to the Registrar General for Scotland to inform him that, with the approval of the Parish Council of Caputh and Sheriff of the County of Perth, he was appointing Georgina to act as his assistant. Further correspondence on 26 May 1927 reveals the appointment of Georgina as a full registrar, shortly after the passing of her father.

Above is a column cropped from one of the registers of births for 1921, under the heading ‘When and Where Registered, and Signature of Registrar’ we can see Georgina Ballantine signs as the ‘assistant Registrar’, with her father’s initials underneath. 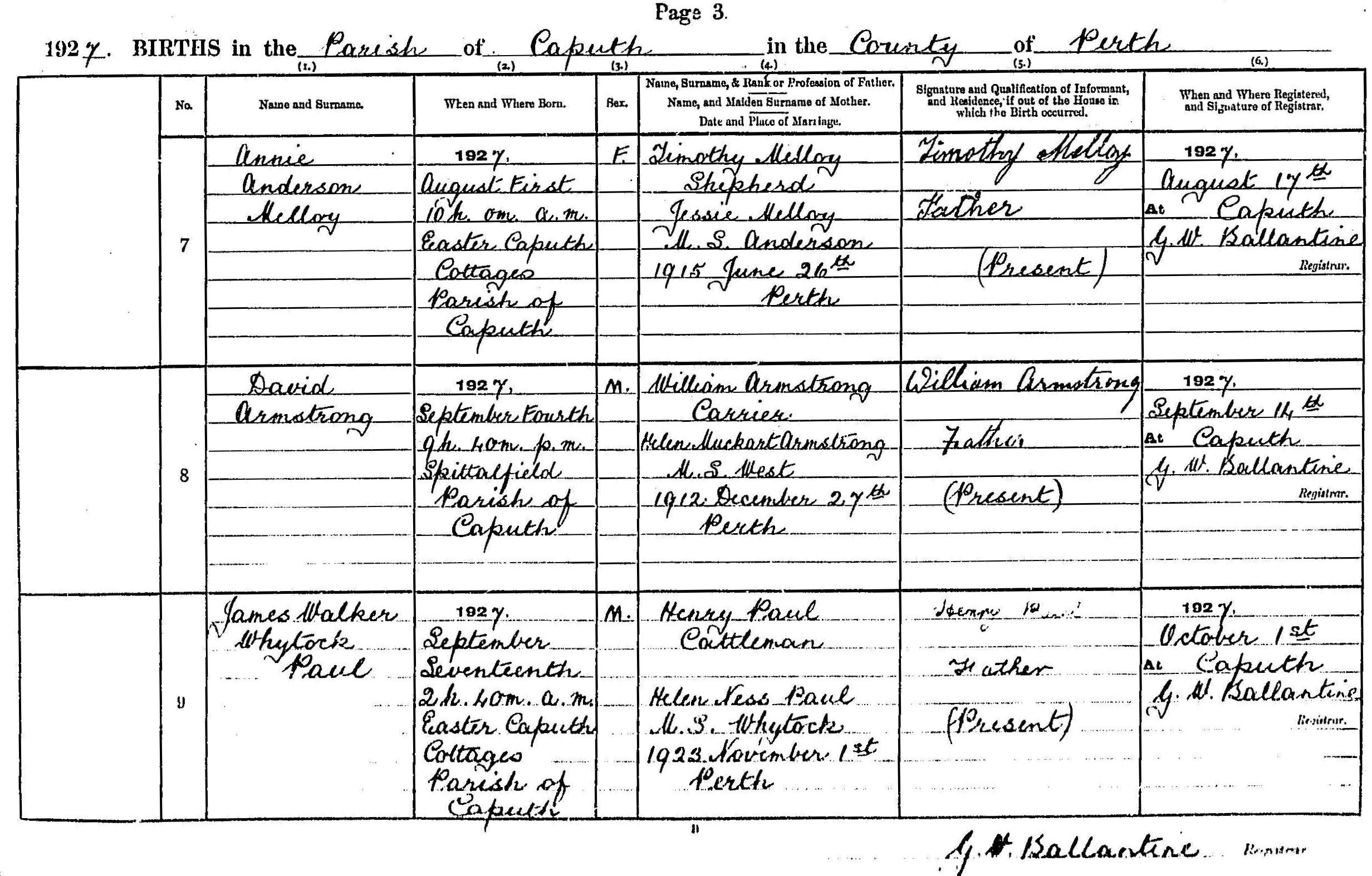 Following Ballantine’s signature through the records, we can see the appointment of her assistant – John McIntosh, Headmaster of Glendelvine School – and her signature as a Registrar in 1927 onwards, finally disappearing from the registers in 1965.

Ballantine remains famous for her record-breaking catch, which recently celebrated its 100th anniversary. Recent reports note that in later life, Ballantine was severely affected by arthritis, a condition that she had suffered from since her early thirties. The disease spread and was severe enough that her legs were amputated, leaving her using a wheel-chair. Despite this, she was well-known in the community, and supported by local friends and neighbours. In 1955, they paid for her house to be wired and one man fitted her cottage with gadgets, including an alarm light on the roof. If she was ever in trouble, she could use the light to attract help from neighbours.

On 12 April 1970, Ballantine passed away in her home, still at Victoria Cottage, Caputh. Today she is still commemorated for her record catch, and for her contribution to her local community in Perth.