On the nights of 13-14 and 14-15 March 1941 Luftwaffe bombers raided Clydeside and inflicted casualties in several industrial centres. Glasgow suffered the highest number of fatalities (about 650), but in proportion to its population of about 50,000 the burgh of Clydebank suffered the worst. According to an official count in 1942 the Clydebank raids killed 528 people and seriously injured 617, compared to totals of 1,200 people, and 1,100 in the whole of Clydeside.

The Germans’ main targets in Clydebank were the armaments factory in the Singer Sewing Machine works, John Brown & Company’s shipyard, and Beardmore’s engine works. Singer’s lost a valuable stock of timber, other works suffered partial damage, but the engine works of Aitchison Blair were completely destroyed. A report by the Civil Defence Regional Commissioner on 3 April included an assessment of the impact on industrial production on Clydeside. After  ‘first-aid’ repairs to many buildings were carried out, it was claimed that  production returned to near normal levels, except at badly damaged works. 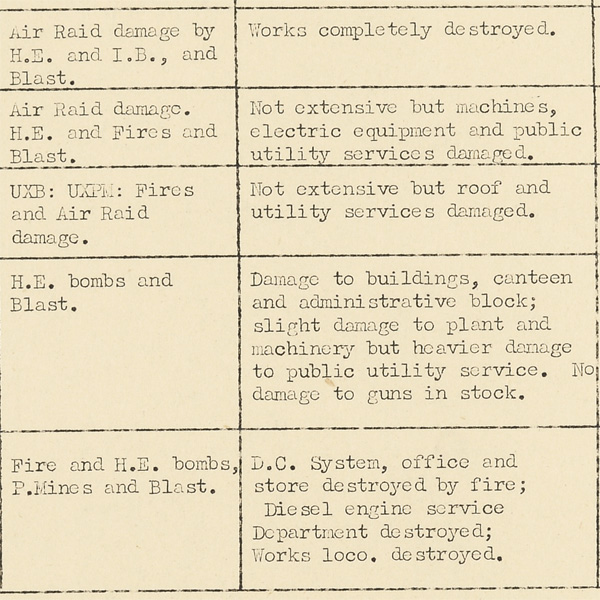 Industrial production was affected by the severe casualties and the evacuation of the town after the raids, causing difficulties in getting the workforce to the workplace. Immediately after the raids people left in droves. Some found shelter with family or friends in Glasgow and elsewhere, and the authorities evacuated many people in buses and provided them with accommodation in rest centres elsewhere. On 17 March 1941 the figure of homeless people who had been given accommodation stood at 11,350. 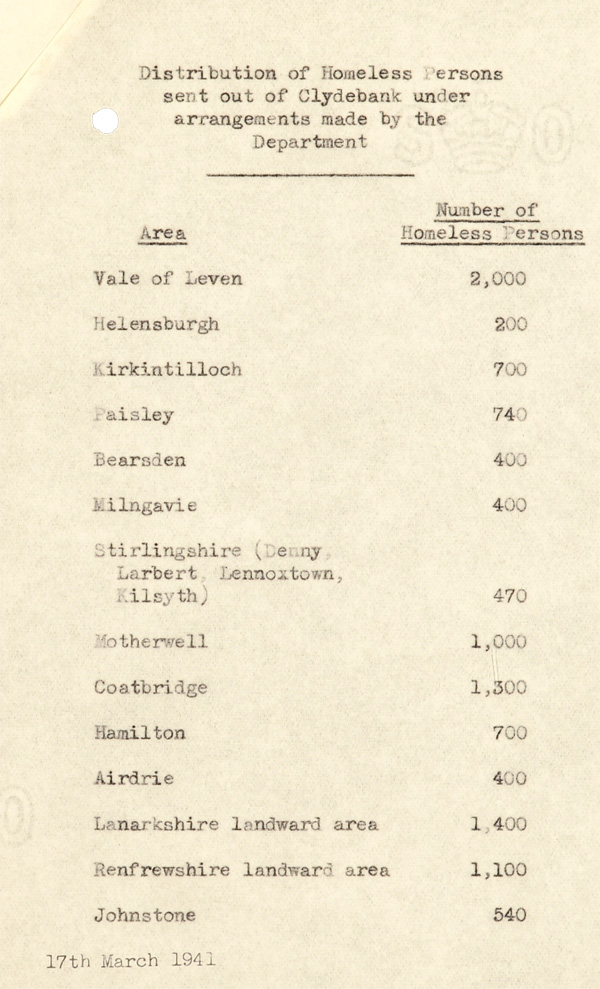 Distribution of people made homeless by the raids
who were evacuated from Clydebank, 17 March 1941.
National Records of Scotland, ED31/528

The maps plotting the fall of bombs confirm that industrial premises escaped relatively lightly, while bombs struck housing across the town. Direct hits and near misses on tenements and houses caused many deaths and injuries, as well as causing catastrophic damage to buildings. Most of the 12,000 houses in the town were damaged in some way, and 4,300 were completely destroyed. Some outlying areas were badly affected, such as Parkhall about one mile north of the Clyde. A concentration of bombs is shown on one of the maps made from the Burgh Surveyor's records. The unnamed streets south of Hornbeam Drive are Sycamore, Rowan and Limetree Drives, and Parkhall Road off Duntocher Road. 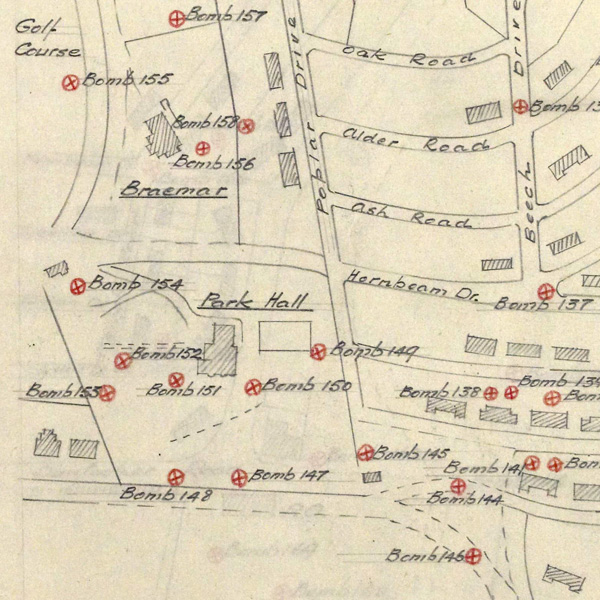 Nearer the river, tenement housing stood close to Clydebank's industries, and here some of the worst casualties occurred. Eighty people died when several houses in Second Avenue were hit. In Dalmuir, between the railway line and the Forth and Clyde Canal off the Dumbarton Road, a cluster of tenements took direct hits from high explosive bombs. In Pattison Street there were 43 fatalities, and when a high explosive bomb (bomb 187) destroyed the end tenement at no.78 Jellicoe Street, 31 people died, including 15 members of the Rocks family. 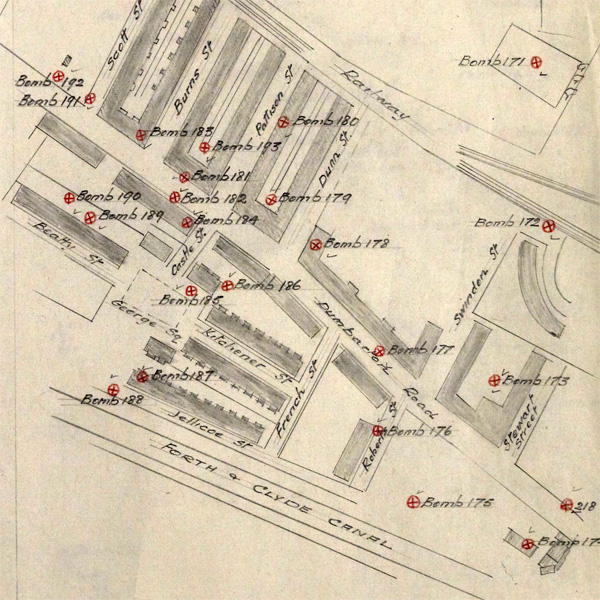 The Register of Deaths for Old or West Kirkpatrick registration district in 1941 is largely filled with the names of over 450 of the fatalities in the Clydebank air raids. The cause of death is starkly stated as ‘Due to war operations.’ The first death registered was of a seven year-old girl who died of injuries from falling masonry, and whose body was found in a shelter in Burns Street, Dalmuir, in the early hours of Friday 14 March. Her father, a shipyard worker, registered her death later that day. The registration of deaths resumed on Monday 17 March and continued in an unbroken sequence at first, and later sporadically. Deaths recorded from July until the last in autumn 1941 were on the basis of information from the Procurator Fiscal rather than relatives, an indication of the difficulties of confirming the identities of air raid victims.

Read the story of a marriage cut short and other lives lost at the Benbow Hotel on Agamemnon Street, near the Singer Works, and the delays in identifying victims.

In NRS the official files of various departments of the Scottish Office contain reports and correspondence on the casualties, the damage to buildings, including schools and the disruption to education, the response to the raids by the emergency and other services, efforts to restore public utilities and transport, and to commence repairs and reconstruction. See especially HH5/162, HH50/1-3, ED31/528.

To find out more about government files in our collection, read our research guide. For John Brown & Co. records see our shipbuilding guide.