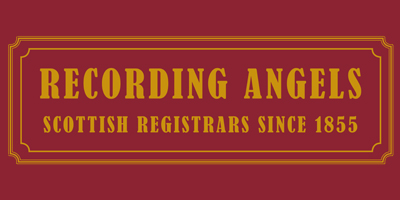 In 2015 National Records of Scotland celebrated 160 years of civil registration in Scotland with an archive exhibition telling the human story of the millions of documents that record the lives of every person in Scotland. The archive display also marked 150 years of the Association of Registrars of Scotland which has worked with the Registrar General for Scotland to help shape modern registration practice, and supported registrars in their work of accurately recording life events throughout the country.

The envy of the world

Scotland’s registers of births, deaths and marriages are the envy of the world. Since 1855 registrars have toiled to record every life event the length and breadth of Scotland. The end result of their work is a detailed picture of the lives of every person in Scotland.

This information is used to plan services provided by central and local government, health services and many other agencies. These records also happen to be a rich source for family historians. National Records of Scotland preserves this huge archive and makes it available digitally through our ancestry resource, ScotlandsPeople.

For more than 150 years, local registrars have had a unique relationship with members of their communities during some of the most important occasions in their lives.

Scotland’s old parish registers were once in a mess. The main records of baptisms, marriages and burials were kept by the parish ministers and clerks of the Church of Scotland, who recorded this important information in many different ways. In 1830 an observer noted "The worst peculiarities … are the want of any regular mode of registration, and the very great carelessness displayed in keeping the records" (William Chambers, 'The Book of Scotland', 1830).

This burial register for South Leith in May 1715 is an exception. It names relatives of the deceased, as well as details of occupation, age, place of death, and dates of death and burial, but not the cause of death. Many other registers were less detailed and not as neat. 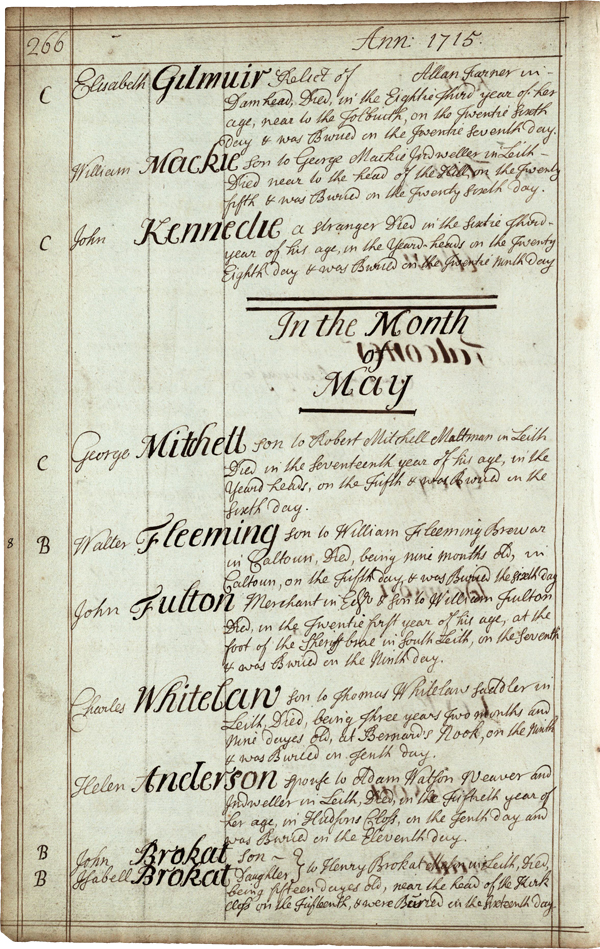 Before 1855 the authorities knew surprisingly little about the lives of people in Scotland. Censuses provided a snapshot every ten years, but more information was needed for better government. The medical profession and social reformers also wished to get a picture of the diseases from which people were dying, their ages, occupations and social class, and where they lived.

The parish registers were inadequate to the task. In 1855 Parliament set up a system of civil registration in Scotland. New officials, called registrars, became responsible for recording prescribed details of all births, deaths and marriages in each of the new registration districts (which at first matched existing parishes).

To begin with the register entries were very detailed. For example, the birth registers recorded the number and gender of previous children born to the mother, and whether they were living or dead. Registers of deaths included how long the person had lived in the district, their burial place and the certifying undertaker, and the names and ages of any children. Marriage registers included the date and place of birth of the bride and groom, and any children by previous marriages.

This level of detail was too much for the registrars to record, so from 1856 onwards all the registers were simplified. They still included more information than the civil registers in England and Wales, which had begun in 1837.

Signatures of the people informing the registrar help make the entries come alive. In this birth register Andrew and Mary Miller’s daughter Margaret was born at 3am on 1 January 1855 at 4 Douglas Street, Partick in Glasgow. She was their third child – one boy was living, but their first daughter had died.

Registrars usually had other jobs as well – many were parish schoolmasters or inspectors of the poor. Others such as farmers or joiners were appointed more for their local knowledge than for their clerical skills. The Registrar General for Scotland despatched district examiners to check every registrar’s work for accuracy and consistency.

The examiners’ reports reveal the shortcomings of many registrars over the years. When the Northern District examiner visited Kinloss in  Moray in 1880, he discovered that John Stewart had carelessly completed many entries just before his visit. Stewart only had to record 74 ‘life events’ in 1879. His excuse of domestic distractions makes interesting reading - "he had married a wife!". 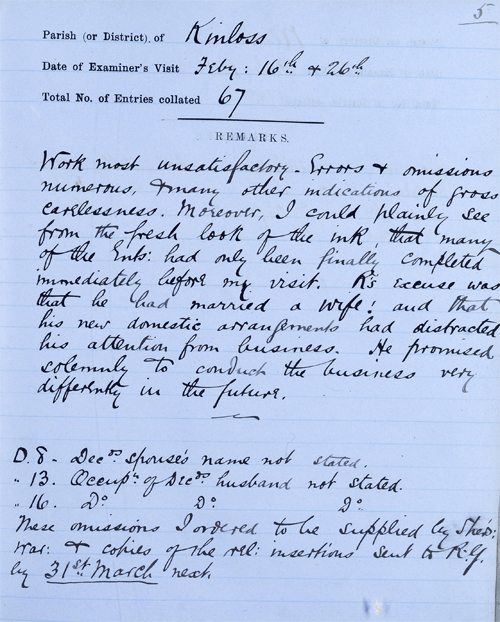 Some of his errors are listed in the examiner’s report, and have been corrected in the Register of Deaths. Stewart’s work must have improved as he promised - he continued as registrar for 36 years until 1916, when he also retired as schoolmaster. 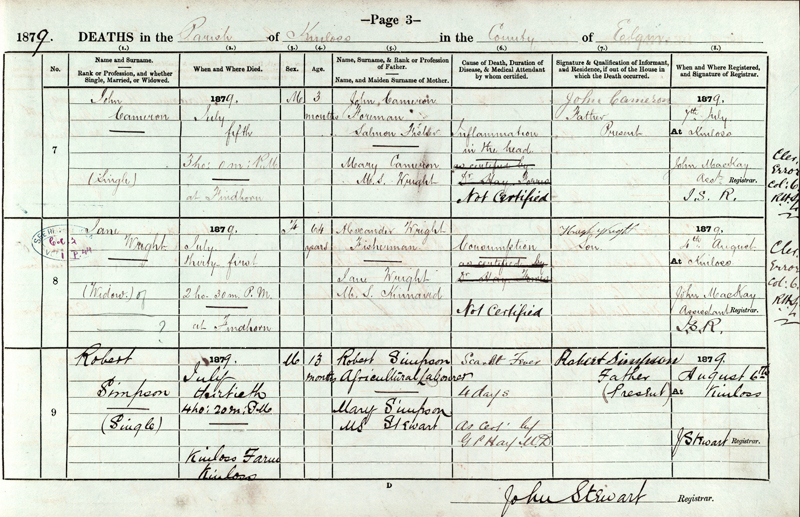 Factual accuracy has always been essential to register entries. Apart from clerical errors, in some instances changes might become necessary because of a court case or findings by the procurator fiscal. Special Registers of Corrected Entries (RCE) record factual changes authorised by the local sheriff, such as the insertion of a father’s name in a birth register, change of name, divorce or cause of death. The RCE is cross-referenced from the original entry, which otherwise remains unchanged. This RCE contains the amended cause of death of one of the victims of Dr Edward Pritchard, the ‘Glasgow poisoner’. On 18 March 1865 he poisoned his wife Mary, soon after killing her mother. 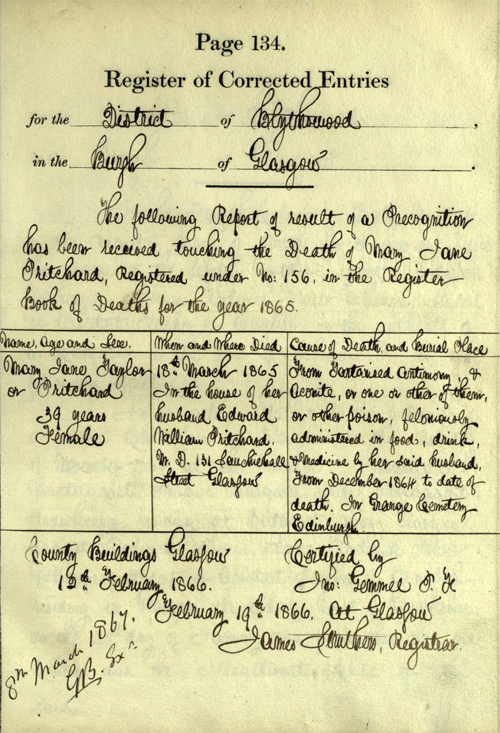 The registrar of Blythswood district in Glasgow who recorded the change was James Struthers, one of the founder members of the Association of Registrars of Scotland.

‘For the diffusion of information and … mutual benefit’

In 1860 the Glasgow registrars banded together for mutual support, becoming the forerunner for a national body. 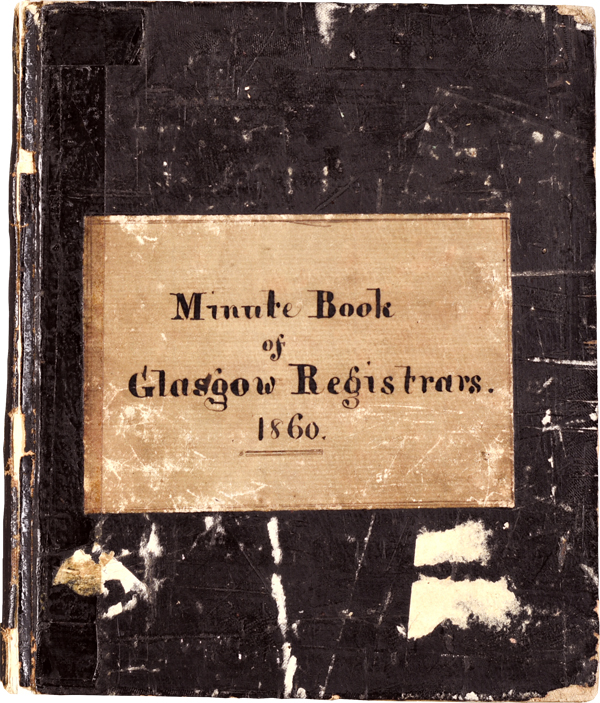 In April 1865 the Association of Registrars of Scotland (ARoS) was formed with fifty-five members from across the country. The new body gave its scattered members a means of collective representation and of sharing information about their demanding work. From the beginning registrars received frequent and detailed instructions from the Registrar General about the information to be registered and how to do so and in turn the Association voiced professional opinions for and against changes to registration practices. 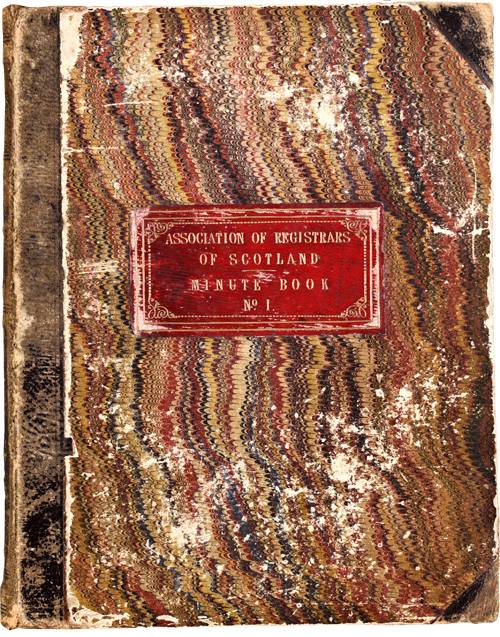 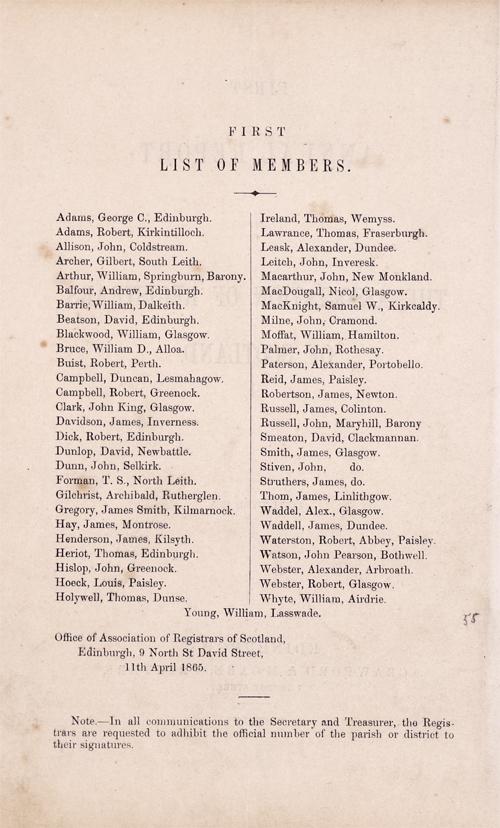 The need for the Association has also been justified by the multiplying duties that registrars were given to perform. These include:

The Association’s progressive proposal in the 1860’s for registrars to perform civil marriages came long before such marriages were introduced in 1940. Likewise the registration of still-births which ARoS proposed in 1870 only began in 1939.

Over the years ARoS has worked with the Registrar General and local authorities to implement countless improvements in registration practice. They also help examine the professional competence of Scottish registrars. As the oldest society of registrars in Europe, if not the world, ARoS has worked with other national bodies for many decades. Annual meetings have gathered members from all over Scotland for serious business, but also for the rare opportunity to socialise together. 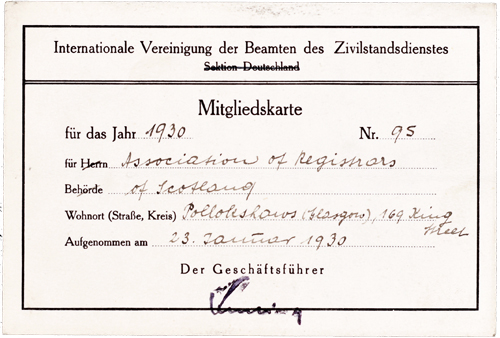 Past, present and future

Over more than 160 years the registration service in Scotland has been transformed from an all-male preserve to a profession in which, in early 2019, 89 per cent of the profession are female. The first female registrar was appointed in 1883, and in 1913 no fewer than 32 women registrars were in post. Most worked part-time in rural districts, and still to be counted are the many female interim registrars and assistant registrars. The enlistment of male registration staff during the First World War provided more opportunities for women to enter the profession, including appointments in more populous districts with heavier workloads. Two of the three women photograph of 1932 were appointed assistant registrars during the war: Nellie Buchanan at Renfrew in 1916 (on the left) and Lizette Neil Evans at Gourock in 1917 (at the right). 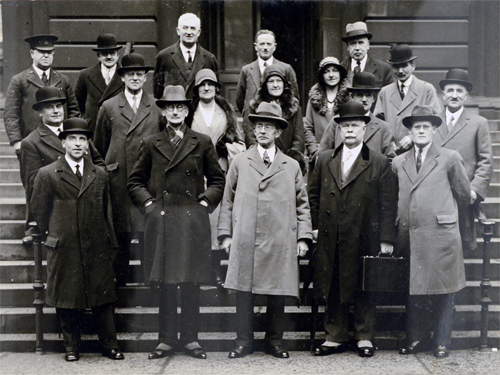 Momentous changes have already occurred to the life events that appear in the registers. Same-sex marriages  have been registered locally since they became legal in 2014, and records of gender recognition (2004) and single parent adoption (2007) are now kept by the Registrar General. Further changes to life events will doubtless contribute to the continuing evolution of registration practice so that it meets the needs of people in Scotland. 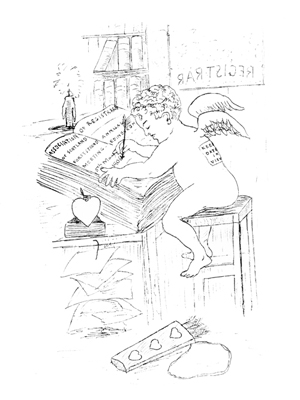 The ARoS secretary as Cupid invites fellow registrars to their annual meeting in March 1906
National Records of Scotland, Records of the Association of Registrars of Scotland.

Today, the Registrar General for Scotland continues to oversee the work of more than 700 local registrars and the rich archive of registers they create is preserved by National Records of Scotland and made available through the official family history website ScotlandsPeople. You can read more about registration in Scotland here and search the archive of the General Register Office for Scotland (collection reference GRO) in our online catalogue.