Arthur James Balfour was elected to Parliament in 1874 and acted as private secretary to his uncle, Lord Salisbury, leader of the Conservative Party. He was Secretary of State for Scotland, then Chief Secretary for Ireland and leader of the House of Commons before taking over as Prime Minister in 1902. He resigned in December 1905 and was succeeded by Henry Campbell-Bannerman as Prime Minister and Bonar Law as party leader. During the First World War he was First Lord of the Admiralty and then Foreign Secretary under the coalition government of Lloyd George. On 2 November 1917 he issued a government statement, known as the Balfour declaration, on 'the establishment in Palestine of a national home for the Jewish people'. After the war he was honorary president of the League of Nations, president of the British Academy and was made a knight of the Garter and earl of Balfour and viscount Traprain. He died at his brother's home, Fisher's Hill, on 19 March 1930 and was buried at Whittingehame.

Learn more about A J Balfour’s family and estate, and his political activities in our feature Across the divide: A J Balfour and Keir Hardie in 1905.

Arthur James Balfour was born on 25 July 1848, the son of James Maitland Balfour of Whittingehame and Lady Blanche Mary Harriet Gascoyne Cecil. The entry in the Old Parish Register for Whittingehame shows that he was baptised on 2 August by the Reverend James Traill, minister of Trinity Episcopal Chapel in Haddington. The witnesses were Charles Balfour of Balgonie, John Balfour of Balbirnie and the Reverend John Lumsden. 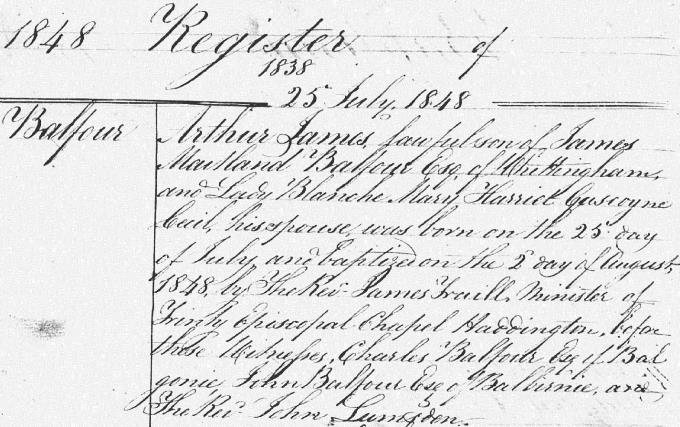 In 1851 Arthur James Balfour, 2, was a visitor at Thirlestane Castle, home of Lord Lauderdale. The census record for Lauder shows the Balfour parents were nephew and niece to the head of household.

In 1861 Arthur J Balfour, 12, scholar, was enumerated at Whittingehame House with his family. The household schedule shows that his mother was head of household and a fund holder. There were two visitors and 16 servants. 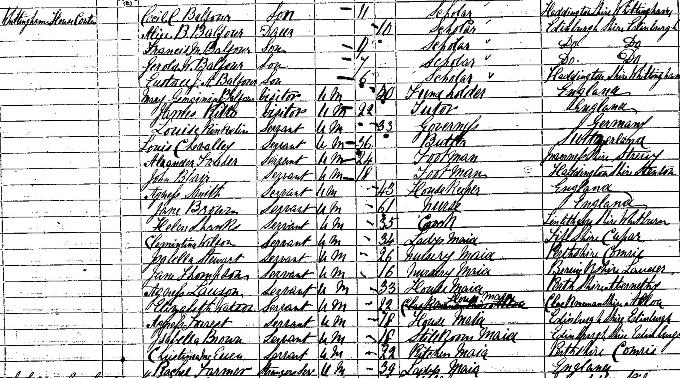