William Farquhar joined the East India Company and travelled to India in 1791. He served in the Madras Engineers, was appointed Chief of Staff in Malacca and was in charge of military intelligence on Java. He went on to assist Thomas Stamford Raffles in establishing Singapore as a trading centre where he was the Commandant. He later returned to Scotland where he married in 1828. He was promoted to the rank of colonel in 1829 and major-general in 1837. He died at his home in Perthshire two years later. William Farquhar was interested in natural history and collected works by local artists when he was based overseas. The Farquhar Collection of Natural History Drawings is held by the National Museum of Singapore.

William Farquhar was baptised on 19 March 1774, the son of Robert Farquhar of Newhall. The entry in the Old Parish Register (OPR) for Fetteresso doesn't give his date of birth or his mother's name. The witnesses to the baptism were Mr William Duncane in Newhall and Mr Arthur Dingwall Fordyce, advocate in Aberdeen.

The testament of William Farquhar was registered at Perth Sheriff Court on 20 June 1839. It includes a deed of settlement, two codicils and an inventory.

The inventory of the personal estate of Major-General William Farquhar of the Honourable East India Company's Service (page 741) gives his date and place of death as 13 May 1839 at Early Bank near Perth. 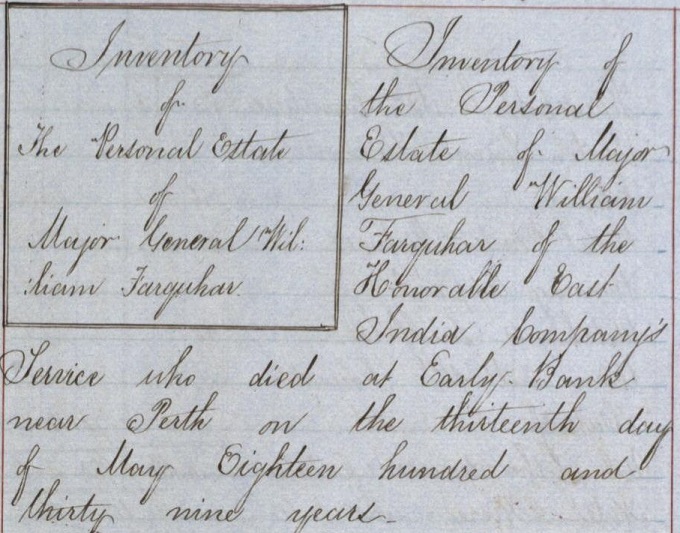 The testament also gives the name of his wife, Margaret Loban, and records the love and affection he bears 'to her and the children of our marriage'.

In the deed of settlement he appointed trustees to manage his affairs after his death. He instructed them to make over to 'Nonir Clement, presently or lately residing at Sincapore and mother of my natural children in the East Indies' the house that belonged to him in Camponglan together with its furniture and other effects (page 708). He also makes provisions of annuities for her and their daughters, Easter Bernard and Caroline Burton, as well as Arthur Farquhar who was living in India (pages 716-718).. 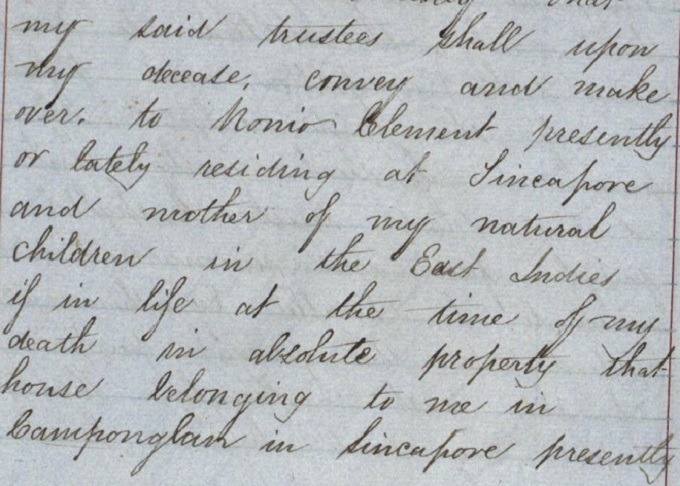 The deed of settlement had to be altered 'in consequence of the great change in my circumstances occasioned by the failure of my agents in Calcutta and London'. The changes were made on 17 August 1833 (page 732).

The codicil or amendment also refers to Nonir Clement (or Clemaine) and the restriction on the conveyance of the house 'to a life rent only' (page 735). 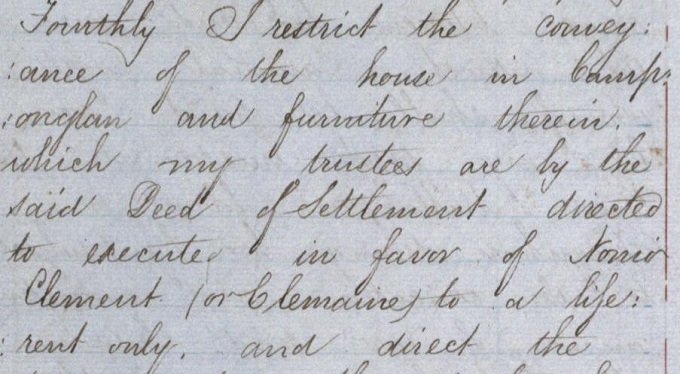