Thomas Millie Dow studied art in Paris and spent summers in France with other British and American artists. In 1884 he travelled to America where he painted the Hudson River. On his return he settled in Glasgow to work on commissions and to exhibit his other works. He continued to travel and painted landscapes in Italy, Switzerland, Germany, Morocco and the United States as well as along the east coast of Scotland. He had also visited and exhibited in Cornwall. In the 1890s he moved to St Ives with his family and had a studio there until his death in 1919. The Art UK website has a Thomas Millie Dow page with details of his works held in public galleries in Scotland and elsewhere.

Thomas Millie Dow was born on 28 October 1848, the son of Thomas Dow, Town Clerk, Dysart and Margaret Millie, his spouse. The entry in the Old Parish Register for Dysart in Fife states that he was their sixth child. He was baptised but the names of the witnesses are not recorded.

In 1851 Thomas M Dow, 2, was enumerated with his grandparents at the Green in the village of Sinclairton. The census return for the parish of Dysart in Fife shows his grandfather, Thomas Millie, 68, was a flax spinner employing 100 men. The household also included two visitors and two servants.

In 1861 Thomas M Dow, 12, scholar, was enumerated with his family at North Side, Quality Street. The census return for the district of Dysart shows that his father was a Writer and that his brother William was a clerk. The household also included his aunt, a governess and three servants.

Thomas Millie Dow, 42, artist, married Florence Cox or Pilcher on 7 October 1891 at Foggyley, Lochee. The entry in the statutory register of marriages for the district of Lochee in the burgh of Dundee shows that Florence was the widow of Robert Hope Pilcher of the Indian Civil Service. They married after banns according to the forms of the United Presbyterian and Established Churches of Scotland. His usual residence is given as the parish of Dysart in Fife and his father's occupation as banker. His mother is recorded as deceased. The witnesses were A B Connel DD, Theodore Marshall MA, W H Cox and Annie E Cox.

The testament of Thomas Millie Dow, who sometime resided in Glasgow, was registered at Edinburgh Sheriff Court on 14 May 1920.  The inventory lists cash, stocks and shares, interest in the trust estate of his father and debentures. It also provides an evaluation of the pictures at his home in Cornwall, on exhibition and in his studio. He left a modest fortune of £6,311, 15 shillings and 1 pence which would be worth in the region of £183,000 today (based on The National Archives' currency converter). The inventory also confirms that he resided in Cornwall and died at Talland in St Ives on 3 July 1919. 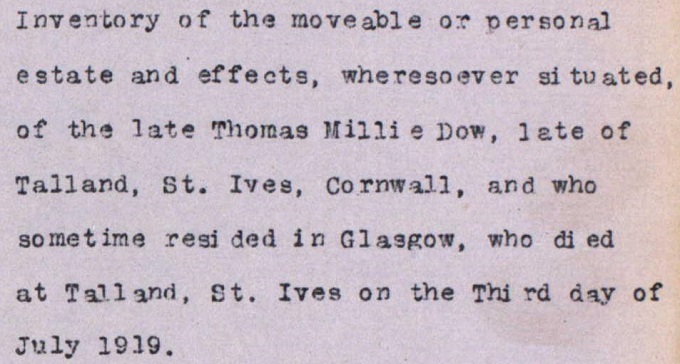 In his will Thomas Millie Dow, artist, leaves most of his estate to his wife under the terms of their ante-nuptial contract of marriage. He makes provision for his daughter, Mary Rosamond, and his step-children, William Hope Pilcher and Elizabeth Pilcher. He also declares that 'it is my intention to maintain my Scots domicile'. He added a codicil on 31 August 1914. It includes an interesting amendment at the end. In the event of his step-son, William, outliving both himself and his wife, he was to inherit the cottage 'at the foot of the Studio field on my property at Talland, St Ives'. The testament describes in detail the plot of land and includes this sketch of it by Dow himself. 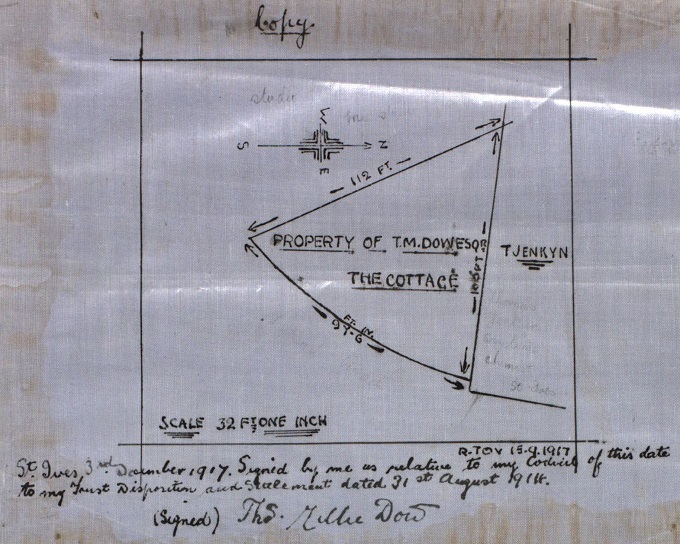