William McGonagall was largely self-taught, appeared in minor parts on stage and gave public recitations. He started to write poetry in 1877. Initially he had his poems printed to sell as broadsheets. Eventually some were published in the Dundee edition of the popular 'Weekly News'. He had a unique style and covered a wide range of topics. 'The Tay Bridge Disaster' remains one of his best-known works. He also produced a play and an autobiography. Despite his low income, he travelled to London and New York. In 1894 he received a letter purporting to come from the Poet Laureate to King Theebaw which conferred the honour of 'Grand Knight of the Holy Order of the White Elephant of Burmah' and the title Topaz. Despite this obvious hoax he was known as William Topaz McGonagall. That name doesn't feature in the records below where the spelling of his surname is very varied. He was buried in a pauper’s grave in Greyfriars Kirkyard. A memorial stone was installed there in 1999 in his honour.

In 1841, William McGonigall, hand loom weaver (HLW), was enumerated at Hawkhill. The census return for Dundee gives his age as 15. Ages of 15 plus were rounded down to the nearest five in 1841. As a result he could have been between 15 and 19 at the time. The household includes his father, Charles, also a hand loom weaver, his mother, Margret, and his siblings Jannet, 13, flax spinner, James, Eliza, Sally and Joseph. The youngest, Margret, aged nine months, was the only one born in the county of Forfarshire, now Angus (Yes). The others were born in Ireland (I). This indicates that the family moved to Scotland between 1837 and 1840. 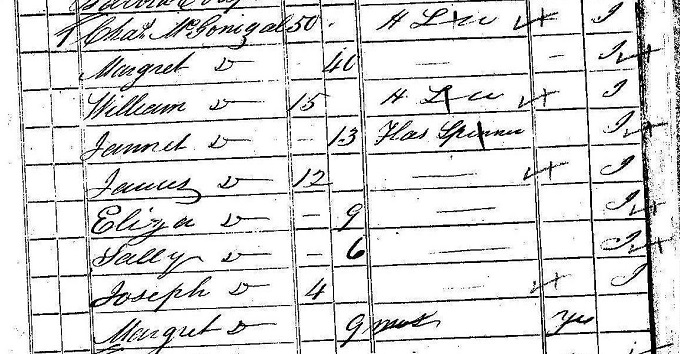 William Mgronegal, weaver, married Jean King on 11 July 1846. The entry in the Old Parish Register for Dundee gives the date they were contracted to marry as 14 June in the left-hand column, dates of marriage being recorded on the right. It also confirms that they were both from the parish. This record has one of several variants on the McGonagall surname. Our ScotlandsPeople website includes a Surnames guide which discusses the options for tracing entries like this.

In 1851, William McGunagall, 26, weaver, was enumerated with his wife and four lodgers at 44 West Port. The census return for Dundee records his place of birth as Edinburgh not Ireland. This is the case for the following censuses. The lodgers may be related to his wife Jean, as they have the surname King. (National Records of Scotland, 1851/282/76, page 11)

In 1861, William McGonagall, 32, carpet weaver, was enumerated with his family at 24 Mid Wynd. There is only a six year gap from his age of 26 in 1851. The census return for Dundee Second District shows that the household included his wife, Jean, their children, William, Margaret, Joseph, Charles and Mary and a lodger, Margaret King, presumably a relative of his wife’s. The dwelling only had two rooms with one or more windows.

In 1871, William McGonagall, 44, carpet weaver was enumerated at 41 Step Row in Dundee. The census return for the district of St Peter shows that the household consisted of his wife Jean, and his children, William, Joseph, Charles, James, John, Mary and Thomas. Several are already working in the local mills.

In 1881, William McGonnigal, 53, poet, was enumerated at 19 Paton’s Lane in Dundee. The census return for the district of St Peter shows that his household consisted of his wife Jean, his children and grandson, Andrew, the son of his eldest daughter Mary.

In 1891, William McGonegal, 62, “Poet” and jute carpet weaver, was enumerated at 41 Paton’s Lane in Dundee. The census return for the district of St Peter shows that his household consisted of his wife, Jane (a variant of Jean), his sons, James and John, and his grandson, Andrew. The enumerator has mistakenly transcribed the entry for Andrew as his son.

In 1901, William McGonagall, 78, poet was enumerated at 1 Potts Union Buildings (Bldgs), Edinburgh. The census return for the parish of St Giles included just his wife Jean and daughter Mary. The enumerator was not sure if this was his true occupation because in the Employer, Worker or Own Account column there is a question mark after worker.

William McGonigall, poet, died on 29 September 1902 aged 62 years. The entry in the statutory register of deaths for the district of Saint Giles in Edinburgh gives the place of death as 5 South College Street. The informant was his widow, Jeane, who was present. Her mark was witnessed by the interim (int) registrar. His parents' names are recorded as Charles McGonigall and Margaret Maxwell. His age at death is significantly less than that recorded in the 1901 census the year before.