Charles Bell was born on 12 November 1774 in Edinburgh, where he later studied medicine. In 1804 he moved to London and became skilled at anatomy and surgery. He was a pioneer in the field of neurology - 'Bell's palsy' is one of the neurological conditions that he discovered. He also made a comprehensive study of gunshot wounds while treating soldiers during the Napoleonic wars. He was knighted in 1831. He died on 28 April 1842 at Hallow Park in Worcestershire while travelling to London.

Charles Bell married Marion Shaw on 1 June 1811. The entry in the Old Parish Register (OPR) for Ayr their proclamation of banns gives his occupation as 'Doctor in London' and shows that they were subsequently married.

Sir Charles Bell returned to Edinburgh in 1836. The 1841 Census for the parish of St Cuthbert shows Sir Charles, Professor of Anatomy, and Lady Bell at 6 Ainslie Place. Their ages are 65 and 45 years respectively - ages over 15 years were rounded down to the nearest five in the 1841 census. 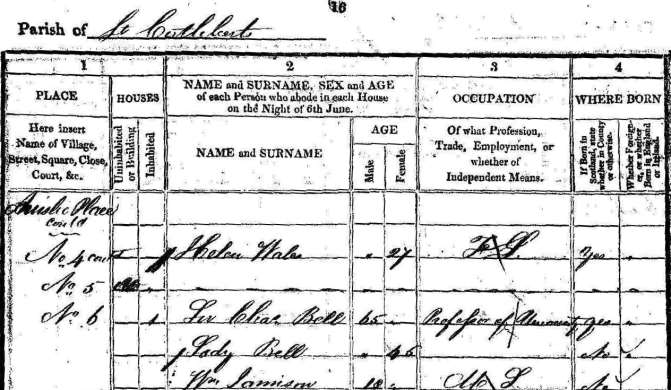 The image of the original document is in jpeg format (approximately 250 KB):

View page 1 of the actual document