Henry Mackenzie's novel 'The Man of Feeling' (1771) charts the emotional responses of the protagonist, Hartley. Robert Burns described it as 'a book I prize next to the Bible'. Henry Mackenzie was editor of the Mirror and Lounger journals and an influential figure among Edinburgh's literati. He was one of the founders of the Royal Society in 1783 and was appointed Comptroller of the Taxes in Scotland in 1804. He married Penuel, daughter of Sir Ludovick Grant of Grant, in 1776. They had eleven children. He is buried in Greyfriars Churchyard.

Henry Mackenzie was born on 26 July 1745, the son of Doctor Joshua Mackenzie, physician and Margaret Rose. The entry in the Old Parish Register (OPR) for Edinburgh gives the date of baptism as Saturday 27 July and the names of the minister and witnesses. 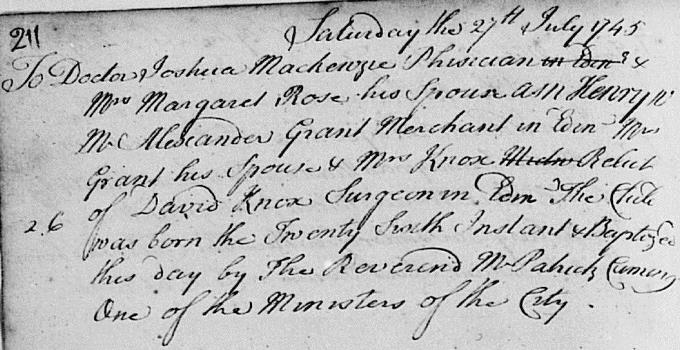 Henry Mackenzie, Comptroller of Tax for Scotland, died on 14 January 1831 aged 85 years. The entry in the Old Parish Register for Edinburgh spells his surname McKinzie and gives the date of interment as 18 January and place as 'In McKenzie's Tomb, Low Terrace'.

The images of the original document are in jpeg format (approximately 290 KB):