Alexander Mann took drawing lessons at an early age and attended evening classes at Glasgow School of Art. In the 1870s he studied in Paris and was influenced by the artist Jules Bastien-Lepage. His picture A Bead Stringer, Venice was exhibited in Glasgow in 1885 but after a public controversy he settled in England. He travelled widely in the following years painting landscapes in Scotland, England, Spain and Tangier. He was a member of the New English Art Club and Royal Institute of Painters as well as being connected to the ‘Glasgow Boys’. Art UK’s Alexander Mann page provides images and details of his works held by public galleries.

Alexander Mann was born on 22 January 1853, the son of James Mann, merchant and Jane Jessie Arthur. The entry in the Old Parish Register for Barony, records that he was their second child and gives his place of birth as 175 St Vincent Street. Charles Mann and Alexander Arthur were witnesses to the baptism.

In 1861, Alexander Mann, 8, scholar, was enumerated with his family at Fairfield House. The census return for the parish of Bothwell gives his father’s occupation as ‘General Warehouseman employing 121 men, 14 boys, and 45 females’. His father was born in Rescobie, Forfarshire (now Angus) and his mother in Dalkeith, Edinburghshire (now Midlothian). The household also included two visitors and two servants.

In 1871, Alexander Mann, 18, salesman, was enumerated with his family at Fairfield House in Green Street. The census return for the parish of Bothwell gives his father’s occupation (and number of employees) as 'merchant in silk, woollen, linen and cotton (182 men, 74 women, 28 boys)'. The household includes a visitor and four servants.

The testament of Alexander Mann was registered at Glasgow Sheriff Court on 21 April 1908. He left an estate valued at £54,895, 15 shillings (s) and 10 pence (d) which is worth in the region of £4.29 million today (based on The National Archives’ currency converter).

The third provision in the trust disposition and settlement refers to his ante-nuptial contract of marriage with Catherine Macfarlane Gow of Saint Juliens Road, Streatham in the county of Surrey, England, dated 13 June 1887.

The inventory of his personal or moveable estate and effects records that Alexander Mann, artist, died at 93 Lugham Court Road, Streatham, London on 26 January 1908. He was domiciled in Glasgow, Scotland. 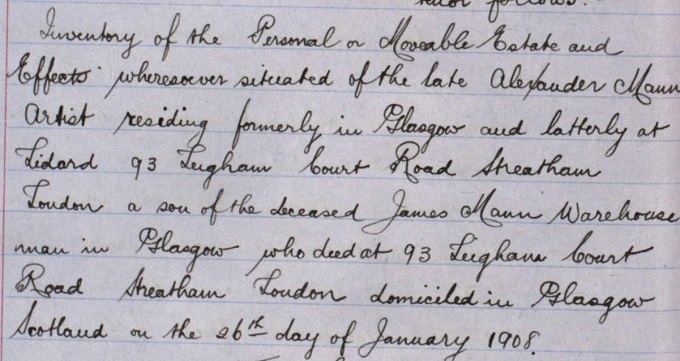 The inventory lists stocks, shares, household furniture, pictures, etc as well as the leases of his dwelling house called Lidard at Lugham Court Road and of his studio at 53 Glebe Place, Chelsea. In both cases the lease was considered to be of no value. 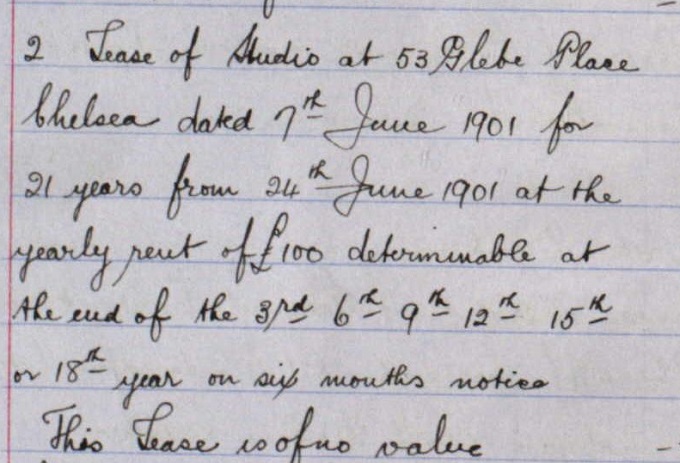