Marion Ross was born at 6:15 pm on 9 April 1903, the daughter of William Baird Ross, organist and teacher of music, and Marion Amelia Spence Thomas. The entry in the statutory register of births for the district of St Andrew in the burgh of Edinburgh gives her forenames as Evelyn Marion Amelia and her place of birth as 22 Royal Crescent in Edinburgh.

The left margin includes a note 'Alteration of child's name' and a reference to the Register of Corrected Entries (RCE), volume X, page 83, 18 June 1903.The RCE page shows her name was changed to Marion Amelia Spence based on information supplied in registration schedule D (forenames, baptismal) which was authorised by the Reverend John Smith, minister of Broughton Place Church. 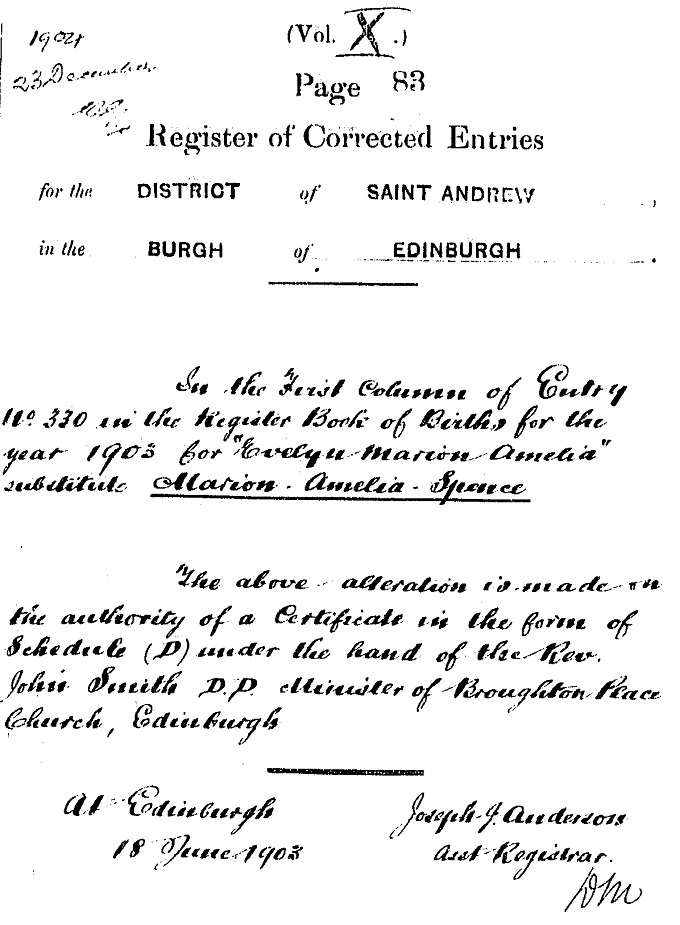 In 1911, Marion A Ross, 7, was enumerated at 2 South Inverleith Avenue with her parents and younger sisters Elizabeth, Ida and Frances. The census return for the district of St George in the city of Edinburgh shows she was 'at school' and that her father worked at a merchant school and partly on his own account at home. He was born in Montrose in the county of Forfar (now Angus). The columns in line 22 'particulars as to marriage' give the duration of her parents' marriage as eight years and the number of their children born alive and still living as four.

Marion Ross, university lecturer (retired), died on 3 January 1994. The entry in the statutory register of deaths for the district of Dunfermline gives her age at death as 90 (National Records of Scotland, 1994/432/4).