James Gillespie Graham designed churches and country houses mainly in the Scottish Gothic style. Examples of his work include Ross Priory, Duns Castle and Blythswood (now demolished) and the interiors of Taymouth Castle and the state dining room of Hopetoun House. He designed the Roman Catholic cathedral churches of St Mary in Edinburgh and St Andrew in Glasgow and was architect of Greenside Church and Liberton Church in Edinburgh. The Warrand of Bught gift and deposit collection contains a letter from James Gillespie to Provost Grant of Inverness dated 26 August 1816 (our reference GD23/6/547). That day he had inspected the top of the Tolbooth spire which had been affected by the aftershocks of an earthquake. You can see an image and transcript of this document in the feature All shook up: the Inverness Earthquake, 1816 on our Scottish Archives for Schools website.

James Gillespie was born on 11 June 1776, the son of Malcolm Gillespie, writer in Dunblane. The entry in the Old Parish Register (OPR) for Dunblane gives the baptism date as 17 June but does not include his mother's name. 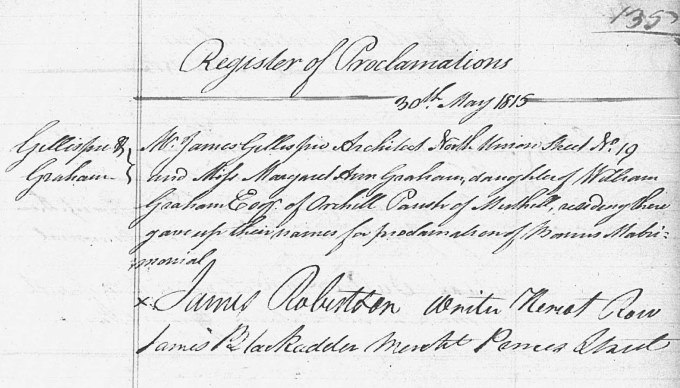 Following Margaret's death James Gillespie Graham of Orchill, architect, married Elizabeth Marjory Campbell in March 1830. The entry in the Old Parish Register for Edinburgh gives his address as Albany Street and Elizabeth's father as the late Major John Campbell, 76 Regiment of Foot. They were proclaimed three times and there were no objections.

In 1851, James Gillespie Graham, 74, was recorded as an architect and Justice of the Peace. The entry in the enumeration transcript book for the parish of Duddingston shows that the household included his wife, Elizabeth, his sister-in-law Barbara Campbell and four servants.

James Gillespie Graham of Orchill, architect, died on 21 March 1855 aged 78 years. This was during the first year of Scotland's civil registration system when the most detail was recorded. The entry in the statutory register of deaths for the district of Herior and Warrison in the City of Edinburgh covers two pages. It records that he had lived in the area for 15 years, that his father had been sheriff substitute in Dunblane and that his mother's name was Jane Stewart. The names of his three children from his first marriage are listed. His address is given as 15 Castle Street and his place of burial as Greyfriars Churchyard.

In his will James Gillespie Graham leaves all his architectural books, papers and drawings to his widow, Elizabeth, desiring her to keep the ones she wants for herself and to pass the remainder to his 'faithful assistant and clerk', Robert Hutton. He expresses the wish that they should not pass into the hands of any other professional person. He later revoked this wish, stating "I hereby Revoke and recall the request that my Daughter should hand over any of my plans, Sketches, Books or others to Robert Hutton as it is not now my wish that they should pass into his hands, I now direct and appoint that all these Articles shall be disposed of in such way as my Daughter and my wife shall think fit".

The images of the original document are in jpeg format (approximately 150 KB):