James Moffatt studied at the University of Glasgow and the Glasgow College of the Free Church of Scotland before serving as a minister at Dundonald and Broughty Ferry. In 1901 'The Historical New Testament' was published and he was awarded the degree of Doctor of Divinity by the University of St Andrews. He followed this with 'Introduction to the Literature of the New Testament' and his readable translations of the New Testament (1913) and Old Testament (1924).The complete Moffatt Bible was first published in 1926 and a shorter version in 1941. From 1911 to 1915 he was Professor of Greek and New Testament Exegesis at Mansfield College, Oxford before returning to Glasgow as Professor of Church History. In 1927 he emigrated to the USA where he was a professor at the Union Theological Seminary and Executive Secretary of the Translation Committee for the Revised Standard Version of the Bible. James Moffatt died in New York on 27 June 1944.

James Moffatt was born on 4 July 1870, the son of George Moffatt, chartered accountant, and Isabella Simpson Morton. The entry in the statutory register of births for the district of Milton in Glasgow gives the place of birth as 26 Burnbank Gardens, Glasgow.

In 1871, James Moffatt, nine months, accountant's son, was enumerated with his parents at 26 Burnbank Gardens. The census return for the district of Kelvin shows that the household included his grandmother and three servants. Both his mother and grandmother were born in Dunbar, Haddingtonshire (now East Lothian).

In 1881 James Moffatt isn't included in the household schedule for his family.

In 1891, James Moffatt, 20, student of theology, was enumerated with his parents at 18 Burnbank Gardens in Glasgow. The cross on the census return for the district of Kelvin in the county of Lanarkshire records that his father was an employer.

James Moffatt, 26, Free Church minister, married Mary Reith on 29 September 1896. The entry in the statutory register of marriages for the district of Kelvin in the burgh of Glasgow gives the place of marriage as Free College Church after publication according to the forms of the Free Church of Scotland.

In 1901 Mary was enumerated at the United Presbyterian Manse in Dundonald with their son George, aged three. James Moffatt is not recorded on the household schedule.

James Moffatt, professor of church history, was recorded as proprietor and occupier of 43 Wilson Street in Govan. His entry is the last on this extract from the page. The valuation roll for the City and Royal Burgh of Glasgow gives the value of his house as £65. 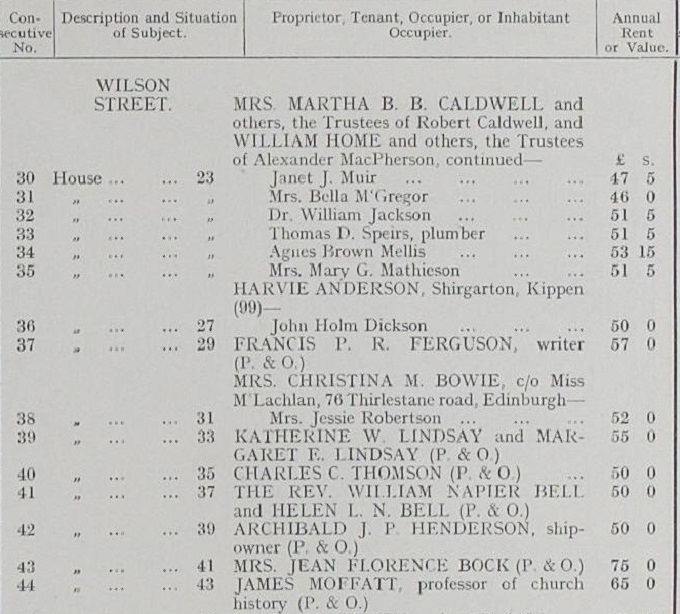