Robert Cadell started his career with the publisher Archibald Constable and became a partner in the firm from 1811 until it went into receivership in 1826. Its most famous author, Sir Walter Scott, agreed to continue working with him. Together they prepared a new author’s edition of the Waverley novels with illustrations by J M W Turner. The volumes were published from 1830 onwards and were followed by Abbotsford and People’s Editions. Through an agreement with the family Robert Cadell held the rights to Scott’s works and published John Gibson Lockhart’s biography of his father-in-law, ‘Life of Scott’.

Robert Cadell was born on 16 December 1788, the son of John Cadell Esquire of Cockenzie and Mrs Mary Buchan his wife. The entry in the Old Parish Register (OPR) for Tranent gives the date of baptism as 5 January 1789. It is recorded on a page of baptisms for April 1789 and is indexed under that year. The witnesses were Major Ross and William Cadell Esquire of Banton.

Robert Cadell, Book Seller, St George's parish married Miss Anne Fletcher Mylne of the same parish. The entry in the Old Parish Register for Edinburgh is dated 22 January 1821 and records his surname as Caddel rather than the standard spelling. It wasn't returned using the name variant option on our ScotlandsPeople website but a search on surnames beginning with 'Cad' was successful as was another using the bride's name. Further information can be found in the Surnames guide.

The testament of Robert Cadell was registered at Edinburgh Sheriff Court on 10 May 1849. His death isn't recorded in the Old Parish Registers but we can find the details in the introduction to the inventory of his personal estate: Robert Cadell Esquire of Ratho, Bookseller and Publisher in Edinburgh, died at Ratho in the county of Edinburgh (now Midlothian) on 20 January 1849.

In his will Robert Cadell dealt mainly with his lands at Ratho and property elsewhere as well as provisions for his family. Towards the end of the document there are individual bequests. In the extract below we see that they included: to his brother-in-law, James Mylne WS, 'Sir Walter Scott's walking stick with silver plate on it and to be found at bottom of wardrobe'; to John Gibson Lockhart his seal head of Sir Walter Scott engraved by Rutter, 'he having often admired it as one of the best representations of Sir Walter on a seal' although this bequest was to be 'sanctioned by my dear wife as she may not like to part with this seal'; and to his 'much valued friend, Thomas Constable, the portrait of his sister, Eliza', Robert Cadell's first wife, painted  by Skirving in 1817 and hanging in his drawing room. 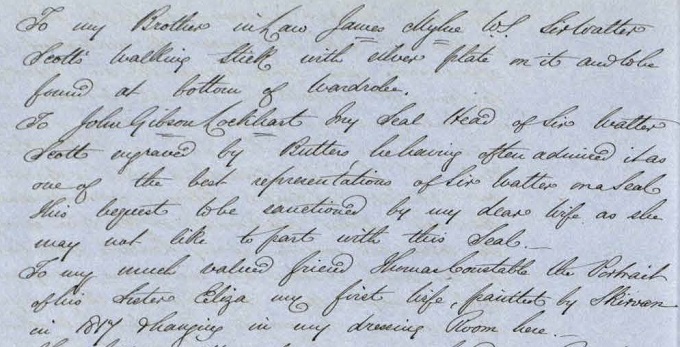