Educator of deaf people and inventor of the telephone

Alexander Graham Bell became involved with work on elocution and speech influenced by his father and grandfather and the fact that both his mother and his wife were deaf. His research led him to experiment with hearing devices. He constructed the first telephone at Boston in 1875, was awarded the US patent in 1876 and introduced his invention to Britain two years later. His other interests included optical telecommunications, hydrofoils and aeronautics and he became a founding member of the National Geographic Society in 1888. He died at his home in Nova Scotia, Canada in 1922.

Alexander Graham Bell was born on 3 March 1847, the son of Alexander Melville Bell, Professor of Elocution, and Eliza Symonds. The entry in the Old Parish Register (OPR) for Edinburgh shows his birth was registered on 12 September 1849 at the same time as his older and younger brothers and that his father had made a solemn declaration before one of Her Majesty's Justices of the Peace. His name is given as Alexander Bell - the middle name of Graham was added later at his own request - and the place of birth as 16 South Charlotte Street. 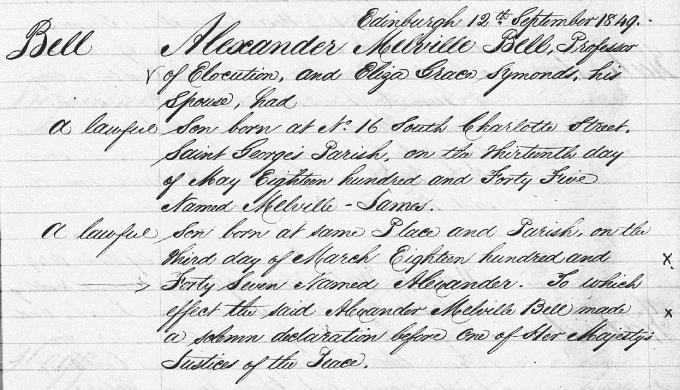 Alexander Graham Bell wasn't with his family at the time of the 1861 Census - the last before they left Scotland.